Forty years ago this week, Stanley Kubrick's The Shining was released into a handful of theaters and was met with a blizzard of chilly reviews. Most critics in 1980 agreed: Like the director's previous film, 1975's period epic Barry Lyndon, it was all flash and no substance.

Pauline Kael wrote in the New Yorker that Kubrick's devotion to technique distanced the audience from the domestic horrors of his story. The Washington Post called it "elaborately ineffective." Gene Siskel said it was "boring" and occasionally "downright embarrassing." Toronto's Globe & Mail: an "overreaching, multi-levelled botch." In its first year of existence, the bad movie-centric Razzie Awards nominated The Shining for worst director and worst actress.

Janet Maslin's write-up in the New York Times was one of the only positive contemporaneous reviews, but even she had reservations: "Most of the small details seem meticulously chosen," she wrote, "but there's no evidence that corresponding care has been taken with the film's central concerns."

Fewer films have made more of a startling critical one-eighty: A movie that was once deemed a forgettable entry in the catalog of a legendary filmmaker is now widely regarded as one of the greatest and most influential films of its genre, and certainly the most famous of Kubrick's entire oeuvre. (Barry Lyndon, it should be noted, has experienced a similar reappraisal.) The Shining is one of the most frequently spoofed and referenced movies ever made, and one of the most exhaustively dissected.

So what's to account for the movie's turn in appraisal?

You probably don't need a plot summary, but I'll provide one anyway. The movie begins with a family — Jack Torrance (Jack Nicholson), his wife Wendy (Shelley Duvall) and their troubled young son Danny (Danny Lloyd) — getting a job as off-season caretakers at the Overlook Hotel, an isolated Colorado ski lodge built on an Indian burial ground. The Torrances are looking forward to peace and quiet, and Jack hopes to finish his long-in-gestation novel. But the spirits knocking about the place, themselves victims of the hotel's bloody past, begin to torment the family. Oh, and little Danny has a telepathic power, known as "the shining," through which he communicates with the hotel's head chef Hallorran (Scatman Crothers).

The most divisive films on Rotten Tomatoes

This all comes straight from Stephen King's 1977 bestseller, though the similarities mostly end there. Kubrick's film makes significant departures from the source material, still to King's chagrin: Character motivations and behaviors aren't the same, major set pieces have been changed and the ending is drastically different.

Part of King's distaste stems from the themes of the story itself: It's a deeply personal allegory about his own drinking habits (the novel's 2013 sequel Doctor Sleep pushes these themes even further), and a slow descent into madness, violence and, ultimately, forgiveness. Kubrick's interpretation, meanwhile, is far more coldblooded and cerebral, and if the ghosts in the novel are literal representations of Jack's own demons, they're merely his drinking buddies in the movie.

As with so many of his earlier films, Kubrick is less concerned with delivering a coherent plot than a mood, an environment and striking, almost dissociative images, and The Shining has so many of them. The ghosts of twin girls in blue gingham dresses, lurking hand-in-hand at the end of a hallway. The elevator doors unleashing a tidal wave of blood. Shelley Duvall's bulging eyes as she swings a baseball bat in front of her. The reams of typing paper covered in the same phrase — "All work and no play makes Jack a dull boy" — over and over again. And in the film's most famous moment, Nicholson's face leering and sweating as he taunts his wife through a door he's just splintered with an axe.

It's those individual moments that have cemented themselves within pop culture, and which have been the subject of endless parody and tribute. The plot, which is riddled with logical inconsistencies and continuity errors (some accidental, some deliberate), ends up not really mattering in the long run. So perhaps The Shining is still freaking out modern-day audiences, many of whom have scoffed at the supposedly dated shocks of older horror classics like Night of the Living Dead or The Exorcist, not because it's relatable or emotionally harrowing but because it slowly and purposefully insinuates itself onto you. It creeps into your subconscious and takes up residency there.

You need look no further than the documentary Room 237 to know this is true. It features filmmakers and historians expounding on their analytical theories about the subtext of The Shining, some of them plausible, some of them outlandish. It's secretly about the genocide of Native Americans, or maybe the Holocaust, or it's actually a manifestation of Kubrick's own guilt about faking the footage of the Apollo 11 moon landing. Regardless of the truth, they've been sucked into Kubrick's puzzle-box, much the way the characters in the film are swallowed up by that cursed hotel. ♦

RANKED: We run down the Star Wars series, from worst to best 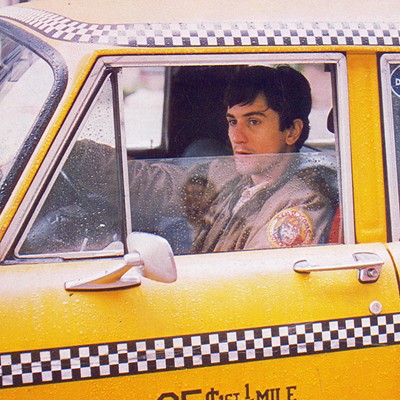 The original print version of this article was headlined "Heeeere's Johnny!"