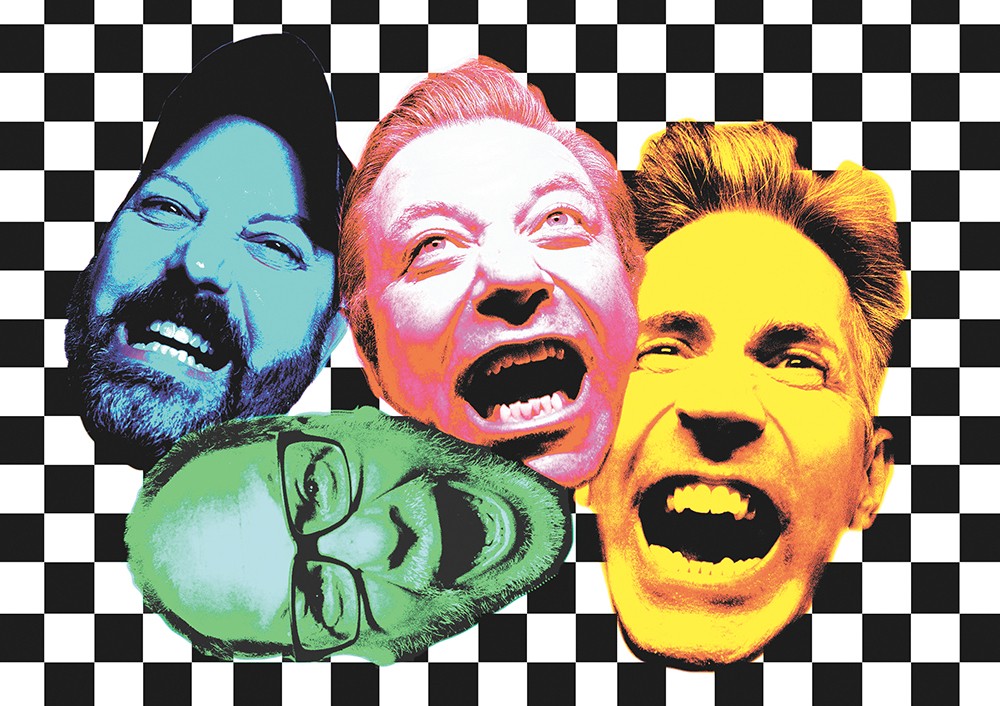 When Big Yuck Mouth started playing together in 1988, Ronald Reagan was still in the White House,

the late 123 Arts was easily the coolest music venue in Spokane and the band's members were all angry, long-haired and in their late teens or early 20s.

Three decades (and a long hiatus) later, the local punk band is active again, and though they're all either pushing or into their 50s, and their lineup has changed several times, they're still cranking out the same fast-and-furious songs they were barreling through in the late '80s.

Looking back on the Spokane music scene of 30-plus years ago, Big Yuck Mouth frontman Kevin Cameron, who went by the stage name Big Kev way back when, remembers a small but scrappy community where the punks showed up to watch the new wave kids play, and vice versa.

"It was very do-it-yourself," Cameron says. "You rented out a hall, like the Woman's Club on 9th Avenue. You'd lie and tell them you were a church group, and you had to sweep up after yourselves. And you went to every show. Every band that came to town, everybody went."

That inclusiveness appears to have returned to the local scene, says Cameron, who's now the sharp-dressed singer-songwriter behind the alt-country group Silver Treason. But the average lifespan of a Spokane band isn't much different now than it was in 1988, and the story of Big Yuck Mouth's short but glorious burst of punk-rock glory is going to sound awfully familiar to anyone who's tried playing music in Spokane.

"When you're in a band here long enough," Cameron explains, "you either burn out, or you stop playing because your friends burn out." 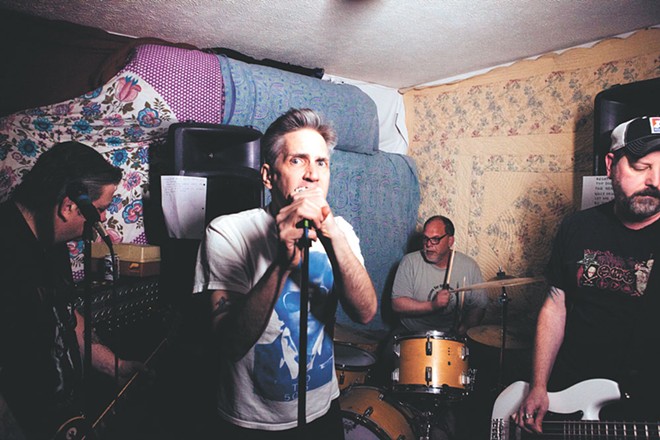 In trying to accurately document the history of Big Yuck Mouth,

with its ever-shifting roster of musicians and all the side projects they formed, you'd need one of those charts that you see on cop shows, with crisscrossing lines of red yarn connecting all the relevant dots.

We'll try and boil it down for you: Everyone in Big Yuck Mouth's current lineup was also in one of the original iterations of the band, though not necessarily at the same time. Current bassist Robert Heyenrath, for instance, was the band's vocalist before Cameron came on board, and guitarist Scott Kellogg, one of BYM's founding members, would eventually be replaced for a short time by Paul D'Amour, who would then go on to play with the hugely successful metal band Tool.

Cameron still recalls his "audition" for the band, which came about because Heyenrath decided he wanted to be a bassist instead of a frontman (not coincidentally, he bought his first bass from Cameron).

"The guys just played their songs and had me jibber-jabber over them," Cameron says. "That was on a Tuesday. So they said, 'OK, you're in the band. We have a show Saturday. Here's seven songs; write words to them.'"

And so he did, hammering out some vocal melodies on a multicolored toy xylophone.

A year later, the band relocated to Seattle, where they immediately encountered a far less personable music scene. Most of the city's clubs weren't interested in booking recent transplants who didn't also have managers, so Cameron made one up, adopting the role of a record label hotshot named Randy Fontaine and conducting business over the phone.

"I had our number changed to 726-YUCK, so it seemed legit," Cameron says. "I had a business card and the whole deal. I'd say, 'Well, let me give you our manager's card, and he'll get ahold of you,' but it was just me on the phone."

The ruse seemed to work, because Big Yuck Mouth was soon sharing stages with bands like Bad Religion, Nomeansno and Coffin Break. They recorded a 7" (brilliantly titled The Wreck of the Ella Fitzgerald) with Steve Fisk, who also sat behind the boards for Nirvana and Soundgarden. They even headlined a show that a pre-fame Alice in Chains was tacked onto, and Cameron recalls one of the band's members collecting their cash payment in a briefcase that was handcuffed to his wrist.

But like so many bands that didn't fit neatly within the confines of the grunge movement, Big Yuck Mouth struggled to keep Seattle audiences coming to their shows, and they dissolved in 1991.

"I thought I didn't want to be in a punk-rock band again, because I don't know if I'm that mad anymore," Cameron says. "You know, when you're in your 20s and you're pissed off, everything's black and white, right or wrong. The world's just a lot grayer now."

Flash forward to 2009, at a show that reunited several long-defunct local punk bands,

when the original lineup of Big Yuck Mouth played together for the first time in nearly two decades. (That concert later served as a springboard for the collaborative music documentary SpokAnarchy!) The band immediately fell back into their old rhythms, Cameron says, and they've played a few more one-off shows since.

But now that Cameron, Kellogg, Heyenrath and drummer Dave Pelo are all back in Spokane, they've been practicing more frequently. They're even writing new songs, and they still find plenty to be angry about.

"It's true that your attitudes change, but some of them don't, and you have to deal with that," Cameron says. "Either you channel that anger into something constructive, or you become an alcoholic. It is sort of a relief to know that it's still there, that it wasn't folly or kids pretending to be mad at stuff." ♦