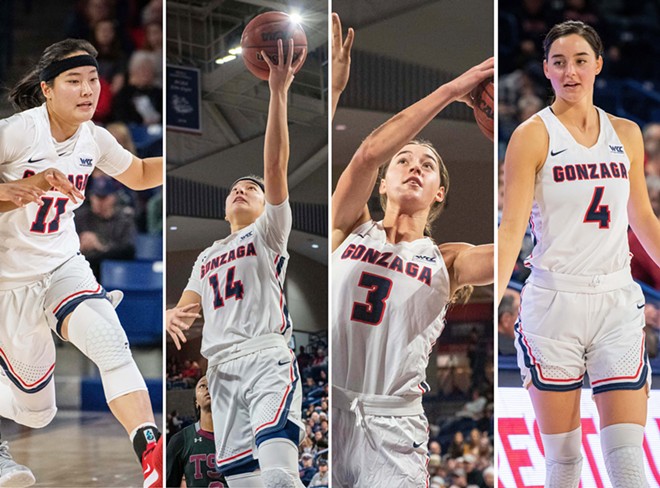 Fans of Gonzaga women's basketball learned that this fall when freshman guards Kaylynne and Kayleigh Truong became the team's second pair of identical twins. The first were Jenn and LeeAnne Wirth, two junior forwards who start most games together.

For the Truongs from Texas, the intent was always to play on the same team at the next level — same with the Wirths from Arizona. Both sets of twins tailored their college recruiting accordingly and ended up at GU.

"We always wanted to go together," Kaylynne says. "We were kind of like a package deal. It's funny because some of the colleges didn't know we're twins and they were recruiting one of us. And the phone calls are really awkward ... like, 'Oh, we have a sister, we have a twin sister.' And we played on the same team."

The Wirths' older sisters suggested maybe they should part ways in college and experience some things separately, but that didn't make sense to them. They couldn't imagine being separated.

"I've spent my whole life with Jenn," LeeAnne said. "She's my best friend and we are both different in our own ways and we know how to be our own individuals."

Jenn and LeeAnne actually hosted the Truongs on their first recruiting visit to GU, because, who else?

"I took pride in knowing which one was which right off the bat," Jenn says with a laugh. "It was just super fun to have another set of twins around. They kind of understand, like, the jokes and the stupid comments that people have that revolve around it."

The Truongs fill a crucial need for the Zags as dependable reserve guards, but coming off the bench means they rarely see the court at the same time. 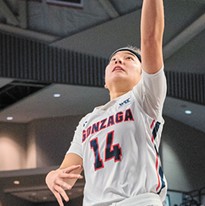 "It's different when we're together just because we've been playing together our whole life," Kaylynne says. "At Gonzaga we're trying to earn our minutes and just fit into the team as best as we could."

The Wirths went through a similar struggle as freshmen, when Jenn was starting and LeeAnne came off the bench and struggled with injuries. Now playing the majority of their minutes together, they appreciate their current situation even more.

"It's not like I dislike playing with other post players," LeeAnne says. "But there's definitely something a little bit different about playing with Jenn."

Although head coach Lisa Fortier didn't seek them out for the sake of having twins, their effect on her team's dynamic is hard to deny.

"We're a family place anyway, so they obviously fit right into that," Fortier says. "It's the same thing that [her husband and assistant coach] Craig and I are doing. You're here with part of your family and every day you're really invested.

"You want it for yourself, but you also want your sibling to have such success. It just gives us an extra element of loyalty and it's great for our team."

The double-twin roster is paying dividends for the Bulldogs. Gonzaga is 22-1 on the season and ranked No. 11 in the country, their sole loss in overtime in November against then-No. 1 Stanford. Every week, the Zags look more like true March Madness contenders. The Wirths and Truongs are critical parts of the team's depth they'll need to compete.

You can see the twins' effect on the court, too — from the way they position around each other, and through their passing and fluidity. The Wirths stand together as an intimidating force in the paint on defense, and the Truongs have a shared knack for offensive playmaking. Perhaps more importantly, both sets of twins can always find each other.

"With the Truongs, they'll make a pass or something and you're like, 'where's that going?' And then the other one's just right there," says junior guard Jill Townsend.

"I just feel like I know what [Jenn] is going to do," LeeAnne says. "We played together for such a long time that, like, you just pick up on that, you know?"

But don't be mistaken: each of the four have their own distinct personalities on and off the court. Fortier describes Kayleigh as a risk-taker who plays with confidence rare in a true freshman, while Kaylynne is more a of a perfectionist who seeks to make the right play every time she touches the ball.

The Wirths love to argue and go at it a bit more than the Truongs, who admit they never really argue — not even a little bit.

"Nothing's funnier than when they're going back and forth and everyone's just like sitting in there trying to decipher what they're saying because you can't even understand it," says Townsend, who lives with the Wirths. 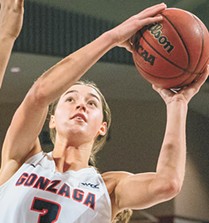 "They're hilarious," Kayleigh said of the Wirths. "I laugh every time I'm with them, I can't help it."

While the Truongs will have three more years together after this season, next year will be the Wirths last on the court for Gonzaga. For the duo that's only been apart for a weekend at the most, it's a hard thought.

Meanwhile, all four are going to try their best and enjoy what they have right now while it lasts — after all, it's rare that you get the opportunity to do what you love at such a high level, and even rarer with your lifelong best friend.

"I'm sure the Wirths can agree to this," Kayleigh said. "They've been playing all their lives, too, and Lynn, she's my best friend on the court. Anytime I get a chance to play with her, it's just fun. We're really blessed." ♦

Gonzaga next plays at Pacific at 7 pm Thu, Feb. 6, and at Saint Mary's Saturday, Feb. 8