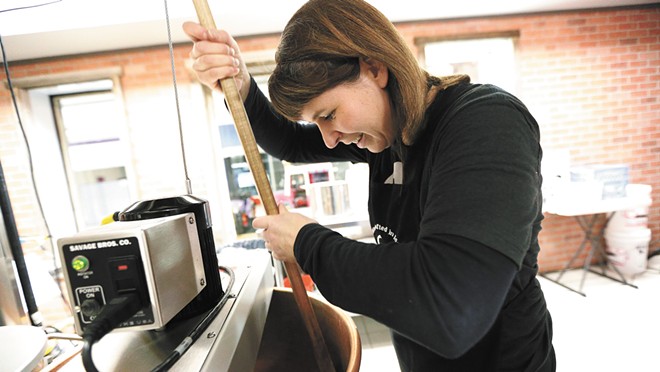 The cookware wouldn't fit in the kitchen sink, and demand for the family's creamy, gooey caramel dessert toppings, created from a recipe developed by self-proclaimed caramel lover Stephanie, had quickly outpaced their ability to manufacture the decadent treat.

"We could only make six bottles at a time on the top of the stove," recalls Brad. "She kept getting all these orders. We were doing lots of local craft fairs, and she would go and sell out."

He describes many late nights of the whole family taking turns slowly stirring big pots of melting sugar, even using portable camp stoves so multiple batches could cook simultaneously. Stephanie would carefully monitor the temperature of each batch to make sure the sugar didn't burn as she tracked the ideal time to add butter and cream.

Those days of scrubbing copper pots in the tub until the wee hours of the morning are now a fond memory. What started out in the Hunters' kitchen, then moved to their garage as it grew, and into commercial kitchens around the region after that, has been based inside Coeur d'Alene's Silver Lake Mall since the fall of 2016.

"About two years ago we were starting to get more requests for it, and Brad said, 'Maybe you have something here. You should think about doing this and making it full time,' so we did," Stephanie says.

Customers can also find Caramel Kitchen's complete product lineup at its Coeur d'Alene kitchen and storefront. Caramel sauces are sold in 10-ounce squeeze bottles ($12/each or $10/each for two or more) or 2.4-ounce sample jars ($5/each). Gift boxes in multiple flavor and size combinations, ranging from $17-$24, are also available. (By the time this story is published, the shipping deadline for Christmas orders placed online will have passed.) 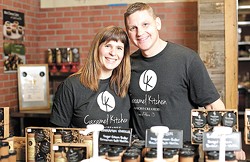 Despite the decadent flavor diversity

coming from Caramel Kitchen's sweet kitchen, the Hunters have grown familiar with the frequent customer question: "What do I put this on besides ice cream?"

Aside from 13-year-old daughter Madeline's joke response of "anything but wood or tires," the answer is that beyond dessert toppings, there are plenty of less-expected uses for the viscous, buttery sauce.

Espresso caramel can be used to fill truffles, drizzle over brownies or stir into a steaming mug of hot chocolate. Pumpkin spice caramel syrup (which is a little thinner than the other sauces) can go in spiced rum, coffee and atop French toast or pancakes. Bourbon caramel sauce can glaze a ham, salmon and baked brie. The warm kick of Caramel Kitchen's chipotle caramel is a sweet complement to ribs, grilled corn, glazed carrots and shredded pork.

To help customers see this versatility, the Hunters created a small handout listing several suggested uses for each flavor. Caramel Kitchen's website is also filled with recipes that pair with each.

Pure cane sugar, butter, cream, salt and vanilla are the only ingredients used to make Caramel Kitchen's sauces, along with natural spices, like cinnamon, or real bourbon and Irish cream, in certain flavors.

"People say 'Wow, it's so buttery,' and 'I didn't know caramel sauce like this existed,'" Brad says. "The number one response we get from people is 'This is the best caramel sauce ever,' so that is on the back of our shirts."

The Hunters are also currently developing a line of dairy-free caramel, which should be available soon.

Most of Caramel Kitchen's sales

are made during special events and shows that the Hunters and many friends and family members travel to around the region. Throughout this past summer, Caramel Kitchen was also a weekly vendor at several area farmers markets.

By employing families with kids who usually all work together to run Caramel Kitchen's booth at craft shows and vendor fairs, the Hunters are realizing their business's mission of aiding families needing a little extra income for their children's private school tuition, among other needs.

"We have about 12 families who help us, and a couple teachers from private schools, just to get extra income and hours," Stephanie explains. "Our emphasis is providing a place for families to work together. I love the fact that for those who want extra income or need it, this is something that isn't pulling Mom and Dad away from the family. This is something they can do together, and it teaches kids how to deal with the public, count change, organize, and learn other life skills."

The Hunters' three children, all homeschooled, regularly help out at the shop. On a recent Thursday afternoon, eldest daughter Madeline is assisting the sales counter while her dad and another employee clean the caramel bottling machine.

Madeline is also learning the caramel-making process, and is credited with developing Caramel Kitchen's cinnamon vanilla flavor, which she created to sell to help raise money for a mission trip to Mexico. That flavor is now a bestseller and is her mom's personal favorite to drizzle on ice cream and to flavor coffee.

A classic salted caramel sauce was Stephanie's first foray, almost seven years ago, in the often finicky process of making homemade, small-batch caramel. After she honed her process, a version of that original recipe became the base for all of Caramel Kitchen's specialty flavors.

"I love the product because I made it for myself first, so to be able to share something that I love with people is very rewarding," she says. ♦

The original print version of this article was headlined "Caramel Marvels"