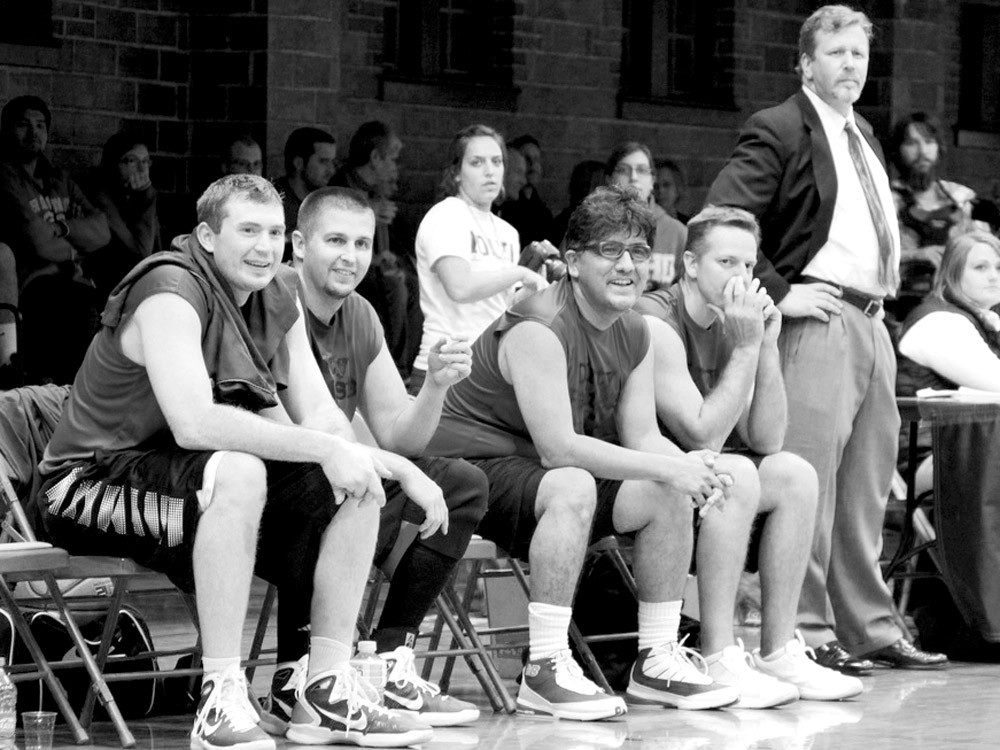 Susan Orlean on how to make something from nothing

Colson Whitehead on how to write about zomies

Lois Lowry on how to be an enduring young-adult author

Your guide to Get Lit! events

Now, the Get Lit! festival is giving locals a peek at these local literary giants’ basketball team, the Spokane Dirty Realists, a squad that was formed for a one-time fund-raiser at the University of Idaho last fall but which has fired imaginations in the art world. The Brooklyn Book Festival is hoping to take on the Dirty Realists in September and Portland’s Wordstock Festival is also said to be interested in a game.

Idaho professor and author Kim Barnes, who brainstormed the original game last fall, says there is even talk of having a literary basketball game as part of the national AWP (Association of Writers and Writing Programs) conference in Boston next year.

At the root of this phenomenon: “It’s basically me, Sherman and Shann trying to find a game, because we are too cheap to join an athletic club,” Spokane novelist Jess Walter says about he and hoop obsessed writer friends Sherman Alexie and Shann Ray, the core of the Dirty Realists.

Literary basketball opens a new range of slams — as in body slams and thrown elbows, not poetry slams. Gaze in wonder as your nerdy English prof strains and hip-checks and butt-bumps to avoid getting posted up by a famous poet on the low block. Marvel as a mild-mannered academician like Gonzaga’s Ray goes off for 30 on lights-out 10-for-13 shooting — all three-pointers.

When’s the last time you saw big-time author Sherman Alexie knocked sprawling to the floor? That would have been last November, at UI’s Memorial Gym, where this literary basketball idea (known as HooPalousa) was first played out before 600 people in a game that raised $3,000 toward a graduate fellowship for a Native American writer.

And round two is Monday at Whitworth University’s fieldhouse, kicking off Get Lit! with a titanic tussle between the Spokane Dirty Realists and the host Whitworth Wordsworths. It’s free, but donations are accepted to set up a creative writing fellowship for American Indian grad students at Idaho.

“Anytime you can do something for Indian Country other than gaming, I think it is a good thing,” says Chief Allan, chairman of the Coeur d’Alene Tribe, who is playing again for the Dirty Realists.

The Coeur d’Alene Tribe donated $1,000 to the fellowship in November and likely will make another small donation, Allan says.

Given the goal behind the contest, organizers strive to include Native American players, and Monday’s game, as in Moscow, is expected to open with song from a tribal drum group.

But there is also free-wheeling, no-defense hoops.

And highly polished trash talk. “Your plays are so antiquated and jejune!” Walter is said to have exclaimed last fall at the hapless Moscow SuperSonnets, who fell 101-77.

Oh, and there are also ringers. These writers and professors are a pretty heady bunch and soon realized their creaky knees would thank them if they called in younger, more athletic players. Some of whom actually minored in English.

The Dirty Realists not only have former Gonzaga standout David Pendergraft again but also former Zags Casey Calvary and Cory Violette, both of whom stand at 6-foot-8 through the shoulders and chest.

“We don’t have anyone who can guard Violette!” exclaims Whitworth history professor Dale Soden, who is putting together the Wordsworths roster. His ringers come in the form of former Whit players Bryan Depew, the school’s all-time leading scorer, and Bryan Williams, a high-school teammate of Adam Morrison.

“And besides, Casey Calvary is 72 years old.”