In its first month, NorthTown Mall's Blue Zoo aquarium was hit with a tidal wave of criticism 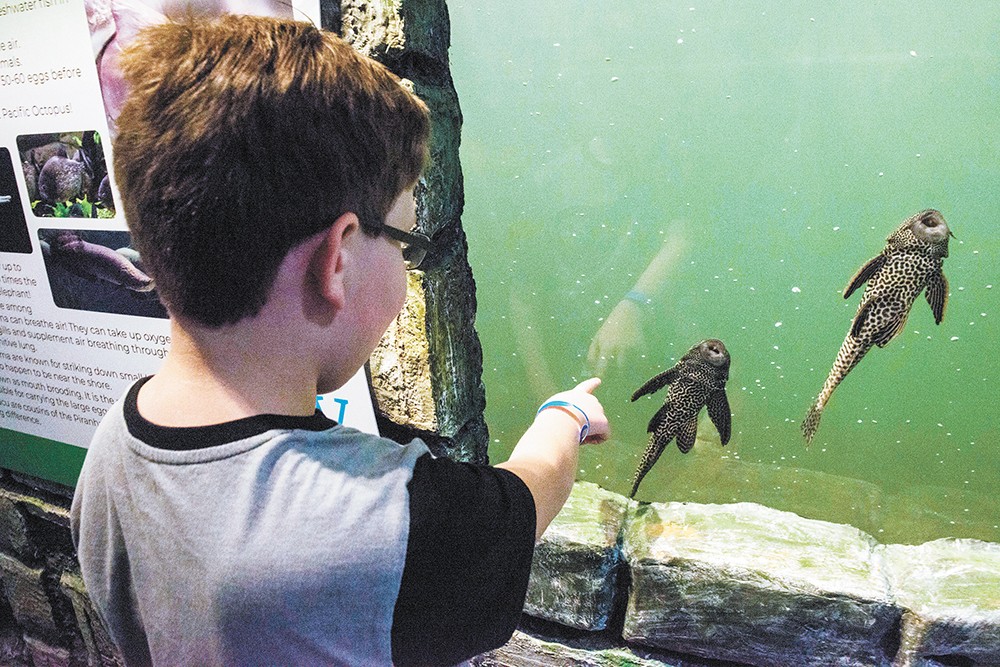 Daniel Walters photo
Riley takes a gander at some of the fish at the Blue Zoo interactive aquarium.

With characteristic slowness, Peaches — a large sulcata tortoise — paws at the entrance gate to the reptile room at Blue Zoo, the interactive aquarium at NorthTown Mall.

The tortoise used to wander around more, the blue-shirted aquarium staffer says, particularly to the aquarium's gift shop. But now, they have to keep a closer eye on it. They don't want it to get stepped on.

After all, as Blue Zoo visitor Jack Nelson posted in a Facebook review, when he'd visited Blue Zoo a few weeks earlier, he'd witnessed Peaches being surrounded by around 30 kids, some of whom were apparently trying to ride the tortoise, and there wasn't a staff member in sight.

"The poor guy looked overwhelmed and terrified," Nelson wrote about Peaches. "He was just trying to get away from the chaos, but the children would not get off of him, and I saw his legs give way several times."

But then Blue Zoo responded on Facebook by appearing to blame Nelson for not telling Blue Zoo sooner.

"I'm wondering, if you are concerned about the animals as much as we are, why, if you saw something like this happen, that you left without informing one of our staff," Blue Zoo initially wrote.

And that, in turn, sparked a fresh surge of outrage on social media: "Seriously, f—- the Blue Zoo," one Spokane Reddit thread read.

Blue Zoo has scarcely been open for a month. But the aquarium already weathered multiple storms of controversy. There was the alleged Peaches incident, of course, but also complaints over betta fish being kept in tiny cups in the gift shops, parakeets being stepped on, and water on the floors. Blue Zoo's management claim they've not only responded to these complaints, but that their aquarium is better now because of it.

Wesley Haws, the founder and owner of Blue Zoo, appears to visitors on video at the entrance of the aquarium besides an animated stingray named "Bubbles."

While working on a farming project in Africa, he explains, he was struck in the head, an attack that left him with serious brain injury. ("Oh no!" Bubbles responds with a high-pitched voice.)

Haws explains he made a long, slow recovery — one that required multiple surgeries and left him half blind — in part because of the therapeutic power of his fish tank. That led to him working at an aquarium maintenance company, and eventually to launching Blue Zoo.

"A friend suggested that I share my passion with others," Haws says on the video. "And that's why I created Blue Zoo — for you!"

Blue Zoo isn't just a place to behold baby sharks. It's interactive. Children lean out over a pool and gently pet the stingrays that come gliding by. They can pick up cleaner shrimp and watch them clean their hands. Or they enter the bird room, a cage filled with nearly 300 parakeets, and watch little birds swarm around their feet, perch on their arms and eat directly out of their hands.

Blue Zoo's ambitions go beyond Spokane. In the future, the company wants to open aquariums in other landlocked aquarium-less places like Reno, Nevada.

"Our goal is to try to do 10 in the next 10 years," says Jonathan Hepworth, director of the aquarium.

Yet interactive aquariums with similar ambitions in other cities like Portland have been dogged by problems, including failed inspections, animal rights protests, and hundreds of animal deaths.

In Blue Zoo's chaotic first couple weeks, where the crowds packed the aquarium, it's easy for something to go wrong, despite Bubbles' advice to, say, shuffle your feet in the bird room so "my friends don't get stepped on!"

"We had a day care kid in here who actually stomped on some birds," Blue Zoo employee Hannah Lowe says over the symphony of chirruping chickadees in the bird room.

But the reports from current or former employees that creatures have been killed by careless children are false, insists Hepworth and Blue Zoo veterinary technician Kathryn Day. Day suggests the confusion could come from the fact that injured animals are sent to the animal treatment center below the main facility, and might not be seen upstairs for a while.

"I'll keep them down there for weeks or months until they get over the shock of anything that might have stressed them," Day says.

That doesn't mean there haven't been animal deaths. About 10-15 percent of the fish Blue Zoo gets die in transit — or shortly after they're introduced to the aquarium because of the stress of the journey, Hepworth says. And since some of the fish have come to Blue Zoo after outgrowing home aquariums, some may come to Blue Zoo more fragile and ragged. To the visitor who doesn't know better, a fish that looks damaged could actually be one the staff has nursed back to health.

But both current and past employees' ability to publicly complain is limited. Each employee has to sign a nondisclosure agreement that, among other things, bans what Hepworth calls "social media slander," the sort that could falsely "make it look like we're in here trying to torture animals."

Hepworth says Blue Zoo encourages employees to speak up internally about their concerns.

But the public, on the other hand, has been more than happy to weigh in. Some visitors objected to betta fish being sold in the gift shop in tiny cups — a pet store practice that came under fire in a PETA campaign last year. When Blue Zoo retorted that betta fish "actually do prefer small spaces," commenters responded by linking to articles showing that, while bettas can survive longer in smaller spaces, they certainly don't prefer it.

"Betta fish caused us more trouble than they were worth," Hepworth says.

Eventually, he says, they decided to stop keeping betta fish in the aquarium altogether. Blue Zoo's made other changes too. To cut down on slips and falls, the team put grip tape on the floors and modified the pools to reduce the amount of water that sloshed onto the floor. They capped the visitors in the bird room at any given time to decrease the chances of parakeets getting inadvertently squished. And in response to visitor complaints, Blue Zoo added a panoply of toys for the parakeets to play on.

And as for Peaches the tortoise?

Ronda Swanson, Blue Zoo's sales and marketing manager, edited her original combative response to Nelson, and posted a new comment thanking him for his feedback, and assuring him that Blue Zoo management was researching the issue. Now, whenever Peaches leaves the reptile room, it's accompanied by a staff member looking out for its best interest. Nelson says he's now satisfied that his concerns are being addressed.

On Saturday, Aug. 31, an inspector from the Spokane County Regional Animal Protection Service arrived, but after being shown the 5,000 square feet of hospital space in the basement, Hepworth says, passed Blue Zoo with flying colors.

"He says, 'Not only are you following minimum state requirements, you're going above and beyond,'" Hepworth says.

And for all the critics, there are plenty of visitors like 11-year-old Riley who shows his mom the pacu — a giant South American freshwater fish with human-like teeth — gliding past in one large aquarium tank.