It's Real Out Here 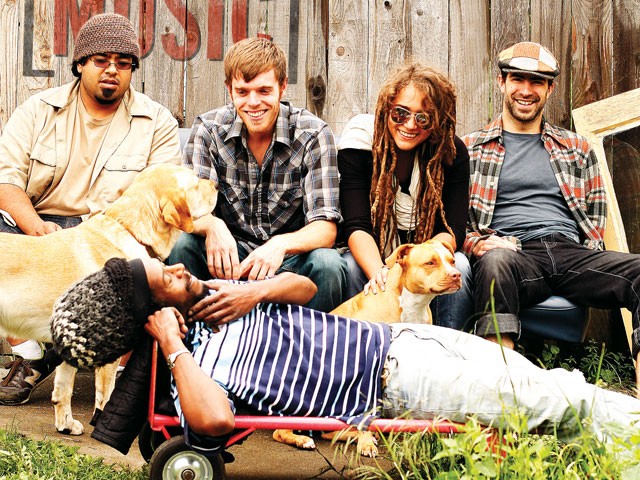 On a relatively rain-moistened Sunday night in Spokane, the Blue Spark is packed with a diverse array of people. A vague aroma of marijuana hangs in the air outside, though it is paid no mind by most. Inside, the stage overflows with equipment and the various local musicians who comprise Real Life Rockaz.

Paul Flores, who DJs as Pancho P and oversees Reggae Night every Wednesday at the Blue Spark, is excited about what’s happening with reggae in Spokane.

“There’s a reggae scene here,“ he says. “We see the same people comin’ out, and new people, all the time. Honestly, this side of the state, there’s not really much but us. At least, nothing like the live band that we’ve got. This is a serious local collective — all of us are involved in other Spokane projects, but this is just fun. It’s got its own flavor.”

Like Flores, John “DJ Yochanan” Gardner has long been a robust force in the region.

“I think this is the best thing to happen for reggae in Spokane,” Gardner says. “I’ve struggled, at times, [in my attempts] to do reggae nights in Spokane. We always seem to be four or five steps behind places like San Francisco, Seattle, Santa Cruz … but Real Life Rockaz are a whole new level in this town … you come into our reggae night and it’s a DJ and a band — it’s fantastic musicians playing reggae mixed with afrobeat, soul, funk and what I focus on, which is West African music.”

Members of the Groove Patrol, Son Dulce and other area groups populate the Real Life collective, and their live presence is further solidified by a few secret weapons. The hypnotic, soulful vocals of songwriter Olivia Kintzele define their stage presence, and a somewhat unsung local hero, percussionist/producer Juan Parris, holds it down in world-class fashion on drums.

Parris, who has been an active musician since he was a child, is originally from St. Kitts and Nevis, part of the Leeward Islands in the Caribbean and the smallest sovereign nation in the Americas.

Eventually finding his way to our humble metropolis with his wife and children, Parris has appreciated performing music here as much as anywhere, steadily playing shows with Real Life Rockaz and, on occasion, Mick Croon and the Players, Raggs and Bush Doktor and Skillet Jones. He also often tours the world as the drummer for legendary reggae singer Mishka (Parris recently appeared with Mishka on the late-night television programs Jimmy Kimmel Live and The Late Late Show With Craig Ferguson).

“This is real life,” Parris says. “We try to live up to the name. Real Life Rockaz is amazing — everyone [in the group] is their own entity. At our core, we’re reggae and West African, but I think we could rock the whole world, man. And it’s kind of nice to be from somewhere more obscure, that people don’t know about [like Spokane]. Real Life Rockaz are really happening — some of us are reggae, some of us are West African [influenced], some of us are jazz badasses… “We just put it all in this pot and say, ‘Look, we gonna make a soup.’ We add all these different ingredients in it, and we call it Real Life rockin.’”

On the 40th anniversary of Uprising, Bob Marley's final album before his death, we consider where it ranks among the reggae legend's catalog