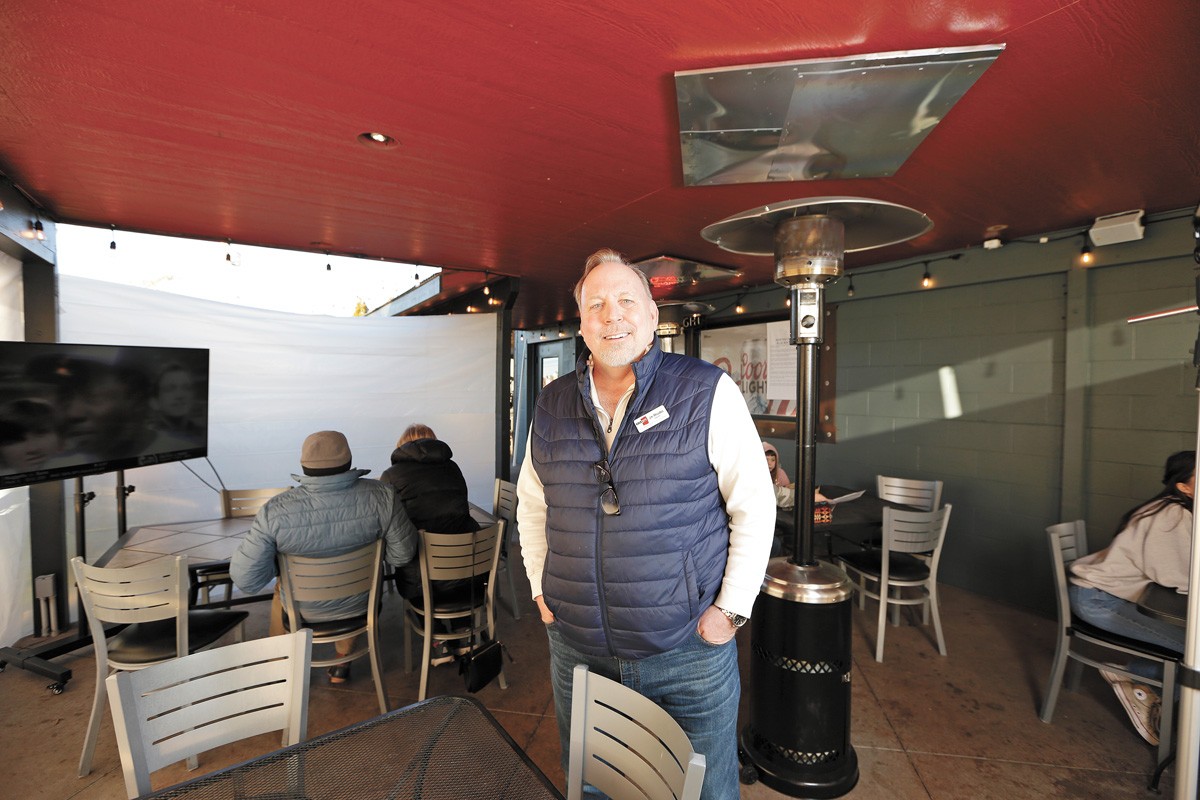 People's general feelings about dining outdoors in the middle of winter, in the middle of a deadly pandemic, are about what we expected when we asked this week's "On the Street" question of Inlander readers (see page 5).

Plenty of respondents noted that recent outdoor meals were definitely chillier than is comfortably tolerable, even with the presence of portable propane or electric heaters. Some said restaurants' temporary outdoor shelters seemed to be more crowded than current regulations allow, or that tables didn't appear to be adequately distanced. Others mentioned that even being seated outside isn't enough of a safety precaution for them, and instead they plan to only order takeout for the foreseeable future.

Not all the comments were negative. Several people also noted having enjoyable dining experiences in recent weeks, saying the chance to leave the house for a few hours for a tasty meal is worth bundling up. They shared that service was friendly, and some outdoor spaces were plenty warm.

For the region's hundreds of restaurants, this extended wintertime patio dining, paired with updated rules for open-air dining in indoor spaces when certain conditions are met, plus a continued focus on takeout orders, remains a critical financial lifeline.

Meanwhile, a poll conducted by the statewide Washington Hospitality Association shows 75 percent bipartisan support from residents for restaurants to reopen at 50 percent indoor capacity. Nearly as many also support recently introduced legislation (Senate Bill 5144 and House Bill 1321) to allow restaurants to reopen indoor dining at 25 percent capacity and to transfer power from the governor to the Legislature to increase capacity over time.

A quarter of normal capacity at Rock City Grill on the upper South Hill, for example, is about 11 tables total, says owner Jim Rhoades. That's five tables on the restaurant's covered patio, and six indoors when the building's garage door to the patio is open, he says.

Rock City is one of dozens of local restaurants able to utilize the state's open-air rule, which lets restaurants seat at indoor tables as long as accommodations are made to increase inside ventilation, like opening roll-up bay doors or multiple windows. A major stipulation of those options, however, is constant carbon dioxide monitoring to ensure fresh, outdoor air is moving throughout the space.

"This last week, we were able to call a couple people back on the schedule who hadn't been on because there wasn't enough work for them, and it was a busy, great weekend," Rhoades says. "It felt like a restaurant again with the heated patio and the six [indoor] tables. It was fun. It felt like something I remember."

Rhoades says despite the many challenges he and fellow restaurant owners have faced since last March, the outpouring of community support has given him, his wife, Rose, and their staff a positive outlook.

"During the first shutdown, the response from our regular customers and the amount of tips they left for our staff was really surprising and wonderful," he says.

Lately, Rock City has been on the receiving end of a chain of pay-it-forward donations from Rhoades' friends and family. In the past several weeks, the restaurant has received more than $4,500 in cash donations that were then used to support its staff and purchase meals for frontline health care workers at local hospitals, as well as local nonprofits like Meals on Wheels.

"We have some real generous friends out there taking care of our businesses and doing what they can to make sure we make it," Rhoades says.

"We've adapted our menu, seating and spacing; we had to move furniture out of the restaurant," she notes, adding that sales are down 60 to 80 percent compared to before the pandemic.

For the bistro, Readel recently invested about $2,000 in three outdoor "globes" that are allowed as part of the state's outdoor dining regulations during COVID-19. Each of the transparent domes seats up to five diners, and each is available for three reservation-only seatings per night, with a $100-$150 minimum purchase requirement. A large roll-up door to the patio at Wine & Taps next door to the bistro has also allowed for a handful of customers at a time to sit inside.

"People are so excited about the bar being open; they're wearing hats and gloves and coats and coming in happy to say hello to our bartenders," Readel says.

Up in far north Spokane, a covered outdoor patio at Hop Mountain Tap Room and Grill has proved to be a popular option for neighborhood regulars, say owners Joe and Katie Condon.

"Instead of doing tents, we built a permanent structure," says Katie Condon. "It's completely covered, and we have a fireplace that's piped out and tall space heaters, so it actually stays quite warm in there. We've actually had four or five customers donate wood to us for the fireplace."

The couple last week were also awaiting the delivery of a carbon dioxide monitor to be able to seat customers indoors, however they expressed concerns over increased heating costs to counteract the cold coming inside at a time when sales are already drastically down.

"At that point, is it even worth ramping up the electricity bill for everyone to sit inside and still be cold, when you'd be warmer outside?" says Joe Condon.

Based on the outpouring of support from their customers so far, the couple are optimistic their restaurant can weather the pandemic, although they're still worried about the impact of continued back-and-forth changes from the state on how they can operate.

In another move to adapt to the ever-changing pandemic landscape, Latah Bistro's Readel says she and her staff reduced the menus to just one for both the bar and bistro, a change that also helps with weekly ordering of ingredients and supplies. Weekly menu updates are posted on each venue's social media pages, which have been vital resources to share updates with customers.

"We try and do what people really love, and also we're seeing some trends of what people are craving," she says. "People have been wanting seafood, so we're doing halibut and shrimp. And steak — people want steaks, so we're doing rib-eye. And desserts; they're into desserts. We usually run out of everything we buy because we order what we think we're going to sell, and we usually sell out."

Like at Rock City and Hop Mountain, it's the support from loyal regulars who are helping the team at Latah Bistro and its sister spots stay optimistic, Readel says.

"The overwhelming gratitude brings us all to tears, from our loyal customers who have reached out to do anything to support us, whether it's on social media as a 'like' or a gift card or a simple hello or a pickup to-go order," she says. ♦