Disney's Newsies is an underdog's triumphant tale, told through catchy song and dance 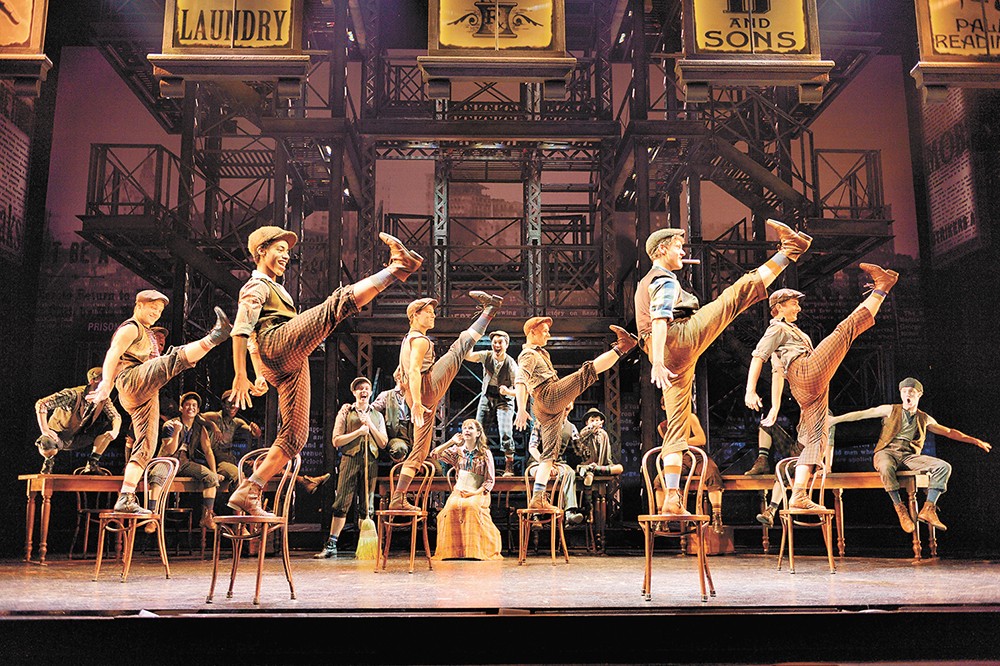 Newsies, arriving in Spokane this week, is a romping musical with a meaningful heart.

A classic underdog tale based on gritty historical fact

— and presented, true-to-form, in Disney's glossy fashion — the Broadway musical Newsies is uplifting, peppy and filled with heart-pounding music and dance numbers.

The two-time Tony Award-winning show (best choreography, original score) played on Broadway for two years and more than 1,000 shows, then hit the road in October 2014. The touring production arrives in Spokane next week for an eight-show engagement, capping off the 2015-16 Best of Broadway season at the INB Performing Arts Center.

Based on a 1992 Disney film of the same name (starring a young Christian Bale in the leading role), the on-screen musical was an initial flop, yet somehow gained a cult following after being released on VHS. It appears that Newsies was much better suited for live theater.

Showcasing famed composer Alan Menken's catchy lyrics through highly acrobatic dance numbers, the cast taps, spins, flips, jumps, leaps and kicks through each song in a whirlwind of energy. This spectacular movement is largely why the show has achieved such widespread acclaim since its debut five short years ago.

"We have a very big following on social media and the internet, especially from young girls; I think one part of that is because we have a lot of dancing and attractive men, but another part is that the story reaches out to all generations," says Dallas-raised and New York City-based actor Stephen Michael Langton, who plays newsboy Davey Jacobs on the current tour.

"Adults might be turned away by the Disney tag, but it's a story anyone can relate to; a classic underdog story about real people, and real events," he says via phone from the tour's recent stop in Sacramento.

Langton's Davey is a fresh recruit to the newspaper hawking biz, stepping into the role with his little brother when their blue-collar father is injured on the job and unable to provide for the family. The brothers soon meet the newsboys' — called "newsies" — leader Jack Kelly, who offers to help them learn the ropes.

At the same time, New York World publisher Joseph Pulitzer (yes, the same namesake of the eponymous award) raises the cost of newspaper bundles, which the newsies must buy to then sell for their own profit. Jack, Davey and the other newsies protest the rate rise, refusing to deliver the papers in a citywide strike.

Alongside these struggles to make a meager income, Newsies weaves in a love story, secrets of Jack's troubled past and the harsh realities of being an orphan in turn-of-the-century New York City, as most of the newsies were.

"These kids had nothing, and they stood up against these behemoths of industry," Langton explains. "People can see themselves in these downtrodden kids who the older generation was just taking advantage of, instead of nurturing."

Playing Newsies' Davey is Langton's second stint with Disney, having worked for seven months as a performer aboard one of the company's massive cruise ships. Yet he'd been prepping long before that for a role in Newsies, since even before graduating from Pace University's theater program in 2013.

"I'd been auditioning for it before it even opened [on Broadway]," he recalls. "You can be perfect for a show, but not perfect for every track and character, and I was learning a lot about how to audition and who I am on stage... Finally, after years, I got an audition to play Davey on tour. It took a lot of time and patience, but I knew it was a role I wanted to land."

The 24-year-old actor was at the corner of 145th Street and St. Nicholas Avenue in Harlem when his phone rang one day last August.

"I almost fainted and I called my mother, which is how I react to most things: I almost faint and then I call my mom." ♦