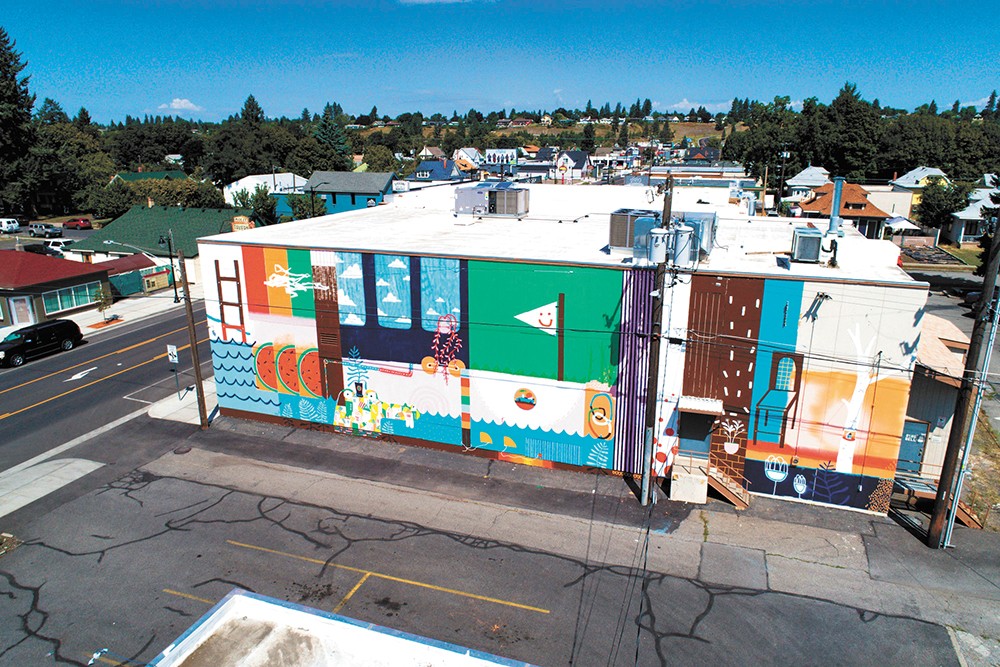 Cruising north on Monroe Street, all of a sudden the color hits you.

Emerging on the right side of the street, in the heart of Spokane's Emerson-Garfield neighborhood, are deep blue waves, seed-speckled watermelons, fluffy clouds, a sailboat, a happy alligator and big blocks of vivid, cheerful colors and whimsical patterns.

Stretching 100 feet long and almost 30 feet tall, this eye-catching mural is one of the region's newest public art pieces and has already become a community favorite.

Painted in just a single week this summer with the help of volunteers, the mural by prominent Spokane artist Tiffany Patterson in collaboration with visiting artist Mick Burson was a joint effort by the artists, Spokane Arts, the Emerson-Garfield Neighborhood Council and the Spokane City Council. It's located on the side of what once was a drab, gray building, and adjacent to local Mexican restaurant Gerardo's, at 2706 N. Monroe.

"The whole neighborhood was just so excited, and people honked and came by and said hi," Patterson recalls. "I love the community of it. They come out when you're painting a mural, and the fact that local businesses and restaurants and friends all donated to help make it happen, I feel like it really was a way for people to feel invested in it, too."

The duo's playful mural joins a growing list of new and existing large-scale paintings across the Inland Northwest, both privately and publicly supported. Just this year, the region has seen new murals installed in city alleyways, rural towns, urban buildings and walls and close-knit neighborhoods.

While the origins of each differ, attributes shared amongst each mural include how they unite the region's communities, bring more art to the masses, activate otherwise drab and unwelcoming spaces and even boost the local economy.

"The North Hill Neighborhood and Garland Business District have really embraced [murals], and they see the way it's improved the neighborhood and draws people, and I think more and more business owners and neighborhood groups are starting to recognize that," notes Melissa Huggins, executive director of the nonprofit Spokane Arts.

Another big mural project this year was the Garland Business District's Art in Action event, which in July brought together regional up-and-coming artists to paint new pieces in the district's Art Alley.

Spokane Arts maintains an annual budget for public murals, but also often partners with neighborhoods, private businesses and the city of Spokane to help coordinate installations.

"Every year we want to make sure we're doing at least one large mural and a couple of smaller ones," Huggins adds. "As they grow in prominence and there's more demand for them, that's an exciting place to be. People are respecting the value and more often coming to us to ask, 'What does the process look like?' and 'What artists can we reach out to?'"

Other murals installed this year across the Inland Northwest include a series commissioned by the city of Colfax's Arts Council that now decorate the sides of buildings along the Palouse town's Main Street.

Cole invited residents to come out and help paint her piece, "Colfax Bounty," which features regional wildflowers and huge bumblebees. She also incorporated mosaic pieces and patterns that pay homage to the region's quilters into her nature-themed design.

"Most of the people who painted had never painted before. It was very exciting for them — young kids and all the way to retired folks and a lot of families," Cole notes.

A prolific and recognizable regional artist, Cole has created many other murals across the region, including at the Moscow Public Library, two railroad viaduct underpasses in downtown Spokane, and a piece in Post Falls.

"I think [murals] are important because a lot of people are intimidated by going out into art settings like galleries and these are available for anyone to look at any time, and I think they do brighten the community," she says.

"I also think it's really important when people are able to work on the paintings... even if it's the smallest little thing, they go back again and again, and it connects them to the mural and their communities." ♦ 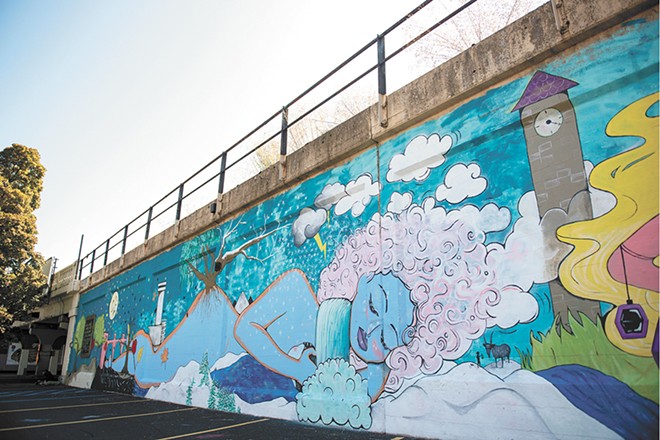 Derek Harrison photo
A portion of the 160-foot-long mural by Shelby Allison and Susan Webber.

• Browne's Addition, Circa 1925 at Pacific Avenue and Cannon Street (east side)

Alley south of Garland Avenue, between Post and Monroe streets

It's a Cutthroat World, Centennial Trail underpass at Atlas Road

The original print version of this article was headlined "Scenic Streets"