What do you think about NFL players protesting during the National Anthem?

In my mind I think it's disrespectful. I'm not saying that I agree with what's going on with the whole racial divide and everything else. What I'm saying is there's a better way and a better place to do it. If they want to do it some other time, fine, but the national anthem is a national symbol. It puts a whole different perspective on everything.

I think it's their right to do so. From everything that's going on, I don't have any problems with it. I mean, it's getting people to talk about it. I think it's drawing attention to a situation that needs to be looked at. 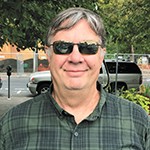 I think it's stupid.

I don't think you should bring that into the NFL, I mean, the NFL is only a game.

Is it how they're doing it, or is it what they're protesting?

Oh, I believe in what they're protesting. I just don't think they're going about it the right way.

I think it's great. I think using a platform where you're in the spotlight to express your opinion peacefully is a really positive thing.

I like it. Hell, yeah. I'm with that. Because I feel like everybody gets to stand up for what they believe in.

What's your response to people who say it's disrespectful?

We're just kneeling. We put our hand up and we band together. How is that disrespectful? We're just showing that we're together. That's all it is.