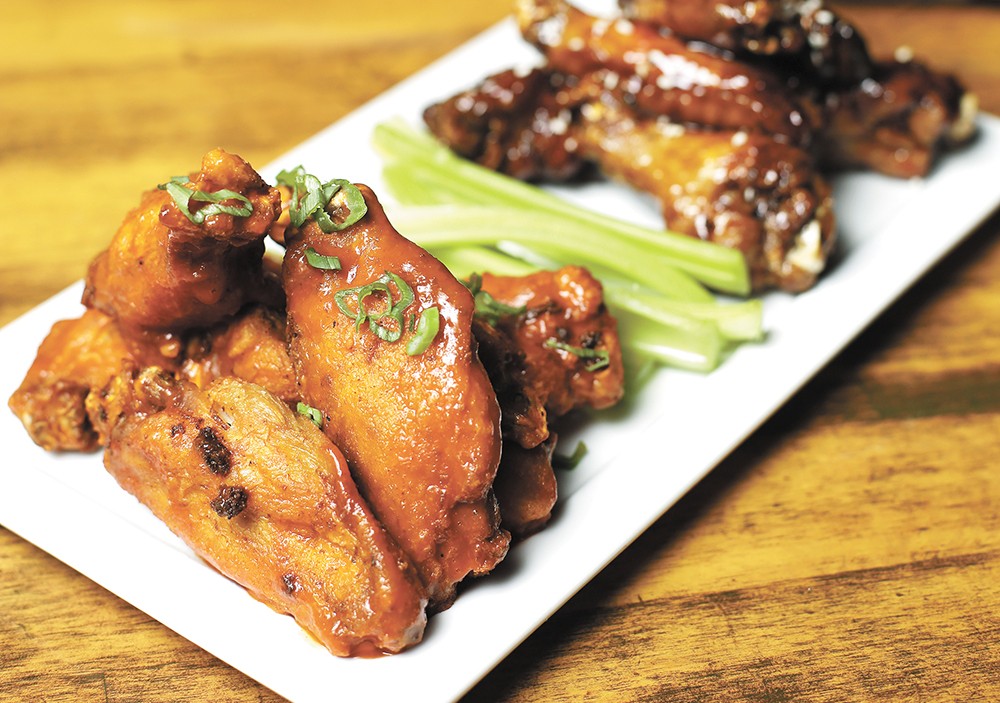 Young Kwak
Wings can be coated in a range of tasty sauces at the Viking pub, which offers special pricing on Mondays.

Go to a bar or pub anywhere in America and chicken wings drenched in some form of barbecue, buffalo or heat-heavy sauce are ubiquitous. In honor of the upcoming Super Bowl 52 — an unofficial wing holiday — and the heart of college basketball season, we sent seven Inlander writers to some of the region's most popular wing spots to nibble, gnaw and lick our fingers clean before sharing what we think.

There are two kinds of people in this world: Those who eat chicken wings for the chicken, and those who eat them for the sauce. If you're the former, get out of here! It's all about the sauce. And the Viking rules when it comes to sauces.

I tried both the traditional buffalo and barbecue sauces. Both were delicious. The wings are draped in sauce and sit in a puddle of it just in case you didn't get enough. I like just enough spice on my wings, and both had a little bite to them. If you want more spiciness, there's also fire buffalo and sriracha barbecue. Oh, and here are some other all house-made flavors at the Viking: island sauce, gold sauce, garlic pepper sauce, Cajun rub, ranch rub and garlic lemon pepper rub. Young Kwak
Wings from the Viking.

You can order bone-in or boneless wings, and if you stop by on Monday, a half-pound of wings for $4 is one of the bar's weekly specials. Maybe you'll turn out like me and leave satisfied, a little delirious and unable to utter a sentence without the word "sauce" in it. (WILSON CRISCIONE)

As someone willing dive into a pile of wings from virtually any establishment willing to put them on the menu, I clearly don't have the most exacting standards. Even so, knowing that a place specializes in offering a world of delicious meats as basically its entire business plan, my expectations were definitely higher dropping by Outlaw BBQ than they would be stopping at some random corner pub.

Thankfully, the Outlaw Josie Wangs delivered, and I credit the fact that the two-year-old Outlaw first smokes its meatier-than-average wings, then fries 'em up to finish the job. The result is a distinctly flavorful bite that doesn't just rely on buffalo sauce, and still has that nice, crispy crunch many wing lovers require. The Outlaw Josie Wangs come in either traditional buffalo or barbecue style, and both are legit and lightly sauced when they arrive; you can always add one of the Outlaw's barbecue sauces as a dipper. The wings are served with ranch or blue cheese and a small side of coleslaw that has some kick, too. (DAN NAILEN)

The wing gods were smiling on me as I walked into the Ref in Spokane Valley. It happened to be Wing Wednesday ($.75 wings), and happy hour to boot (2-6 pm).

A dozen wings and a cold PBR. That's all I needed to walk away fat and happy. I ordered six with the chipotle raspberry and six with the peanut butter and strawberry jam (just because I'd never tried it). Both were good, but I wish I had ordered all 12 with the former. These wings were so damn good I was crunching on the cartilage for more. Spicy, but with a nice raspberry sweetness to neutralize the kick. I also sampled the huckleberry barbecue, which favors the sweet over the smoky, but is still just as tasty.

As someone who rarely visits Spokane Valley on purpose, the Ref was a nice surprise. With plenty of seating, TVs and an assortment pool tables and arcade games, I'll definitely be back to catch a game. (QUINN WELSCH)

24 Taps is a sports bar, the sort with dozens of big-screen TVs lining the walls broadcasting either basketball or music videos. Wings may not be the raison d'être of 24 Taps, but they are a necessary staple of the sports bar genre. And while the selection of teriyaki, buffalo or barbecue wings isn't anything particularly radical, 24 Taps acquits itself well.

The meaty wings occupy a solid middle ground on the crispy-to-messy chicken wing spectrum. Both barbecue and buffalo were crowd-pleasing. And don't be scared by the incendiary menu rhetoric warning that the buffalo wings are "HOT." Unless you have particular delicate sensibility, they're not particularly spicy. Instead, they have a warm, friendly type of heat, not the sort that makes you start chugging blue cheese or ranch dipping sauce. Either way, the wings are just the opener for the true headlining star of 24 Taps' menu: the titanic, gloriously messy Roadhouse Burger. (DANIEL WALTERS)

I need to start this with a blasphemous confession: I don't really like wings. It's largely because they're a chore to eat and incredibly messy. Tearing tiny pieces of meat off of bone and cartilage with my teeth is not my favorite way to eat. Nonetheless, for the sake of consumer food science, I found myself nibbling away at some wings my guy and I ordered at this longtime North Spokane sports bar. He enjoys both wings and super spicy sauces. We met in the middle, ordering the Screaming Yak's Korean sauce, listed at three stars and described as a "sweet chili blend with a big kick," and also the most popular sauce amongst customers. It was as predicted, slightly spicy with a hint of sweet.

Other sauce choices on the impressive list of 12 total at the Yak include the mild and locally made Booey's barbecue (one star), all the way up to the "Screamin' Demon," at an off-the-charts eight stars — masochists who successfully down a full order coated in this hellfire earn the glory of their photo going up on the Yak's "Wall of Pain." At the Yak, all wings are made to order, and come with the traditional sides of carrots, celery and ranch dressing. Crispy breaded wings ($11.90) are also an option. (CHEY SCOTT)

I'm into spicy food — my taste buds were clobbered into accepting heat during my exchange year in Indonesia — so that's why I walked into Flamin' Joe's, which specializes in hot wings. The restaurant is geared towards serious wing-consumption: at the bar where I sat, massive paper towel rolls are strategically placed to keep you (relatively) clean. I ordered a 12-piece bone-in wing meal with two sauces: sweet chili and southwestern. What I got was a platter of thoroughly sauce-drenched wings. (Personally, I prefer less sauce because I don't want to feel like I'm slurping gravy with my wings.)

The southwestern was a little bland, but not bad. The sweet chili was superior since it was spicier while maintaining an appropriate dose of sweetness. But neither flavor delivered the total annihilation that I was expecting from a joint marketing itself as serving "fiery wings." Then I realized that I screwed up: The restaurant's hottest sauce — Code Red — is under the somewhat misleading menu section title of "Original Buffalo Sauces Gluten Free." (I should have read the menu more carefully.) So now I'm left wondering what kind of experience Flamin' Joe's is really capable of. Until next time. (JOSH KELETY)

751 N. Fourth, Coeur d'Alene
What we got: Single order each of regular and boneless wings, $9/each

When Food Network's Diners, Drive-ins and Dives visited Capone's for the "Wings n' Things" episode in 2010, they weren't after the wings; it was pizza the garrulous Guy Fieri wanted. This time around — the latest episode featuring the Coeur d'Alene-based restaurant aired this past October — Fieri was all about the wings. Not content to offer just traditional bone-in wings, Capone's also offers boneless. My partner in this wing-speriment preferred traditional, with its perfectly cooked chicken skin and dark meat, but the boneless tenders get chops for crunchiness with a breading-like coating that really soaks up the sauce.

The buffalo sauce hit all its marks: a dry, smoky heat and appropriately reddish tinge. The Korean barbecue, while a little salty, had a savory sweetness that paired well with beer. You can mix-and-match flavors to some degree, so try a batch each of sweet hot, barbecue, teriyaki, sriracha soy and Thai peanut, the latter of which reminds diners that the menu is full of other options like sandwiches, pizza (try the Thai pizza!), subs and even salads. Another feature: Capone's wings are volume-priced, so the double, around 16-20 wings, is a bargain at $16; the triple tops out at 24-30 wings for $24. (CARRIE SCOZZARO) ♦