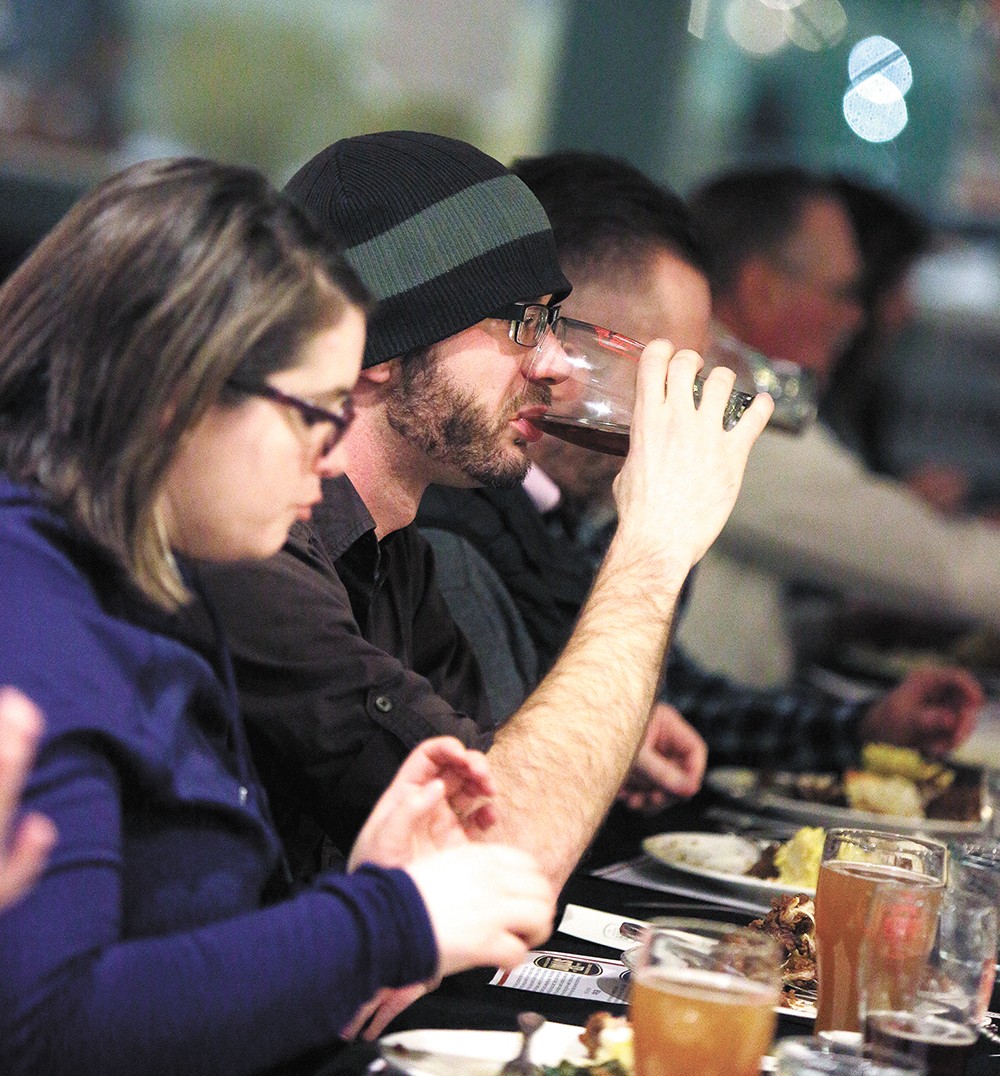 Young Kwak
A recent beer dinner by the Wandering Table.

After about a month of renovations, a favorite pie and slice spot in Browne's Addition is back up and running, albeit under new ownership and with a new name. Pacific Avenue Pizza — or Pac Ave, as it was colloquially known — is now called Pacific Pizza, and is owned by a duo with connections to another local pizza spot. South Perry Pizza owner John Siok and general manager Jon Coyne partnered to buy the restaurant in August, reopening it earlier this month as Pacific Pizza. The change in ownership comes with a contemporary new look for the space (the signature black-and-white tile floor remains), and a completely new menu, Coyne says.

"Some of the pizzas on the menu will be familiar, but the dough is completely different — we use the same dough as at South Perry, but it cooks completely differently in the new oven at Pacific, so the flavor is different." In addition to pizza, Coyne says the new menu includes hot sandwiches ($11), salads ($8-$10) and wings ($9/$16), with all items from the kitchen condensed to one page. In addition to a lineup of signature pizzas ($12-$20/each), Pacific Pizza offers a build-your-own option. The restaurant is open Sunday-Thursday from 11 am-11 pm and Friday-Saturday from 11 am-12:30 am. (CHEY SCOTT)

WANDER INTO FALL WITH OKTOBERFEST AT THE WANDERING TABLE

This month's version of the Wandering Table and Yards Bruncheon's Fried Chicken and Beer Dinner Series is ditching its American roots for a full Bavarian-themed dinner on Oct. 11. Hosted at the Yards, the dinner featuring German-inspired food and beer starts at 6 pm, with service at 6:30. Tickets are $35 each and can be reserved by calling 443-4410 or emailing kendupree33@gmail.com. In other news, the Wandering Table also rolled out some new fall menu items, including a watermelon tomato salad, duck carnitas, grilled short rib, spice-crusted lamb rack and Szechuan tofu wontons, the latter feature a tofu-mushroom filling, hot and sour vinegar and red chile sauce. (CS)

"We started testing out things and cookie dough was one of the first things we tested out, and everyone who works here tried it and said 'this is so good, we should sell it.'" says Lysa Cole, who works at Method's North Side location. "We did a poll on Instagram to see if the customers would like that. Everyone wanted cookie dough."

Currently, Method is testing out new fall flavors for the plant-based dough, including a raw sugar version. Current flavors of the sweet treat include chocolate-chocolate chip and chocolate chip cookie dough, both available at Method's two Spokane locations, on the north side (7704 N. Division) and downtown (718 W. Riverside Ave.). (MICHAELA MULLIGAN)

Nothing says fall like apple harvest, and helping ferry in the season is a regionally grown apple cultivar called SweeTango, a newer arrival to Spokane-area stores' apple displays in recent years. Developed at the University of Minnesota in the early aughts and first sold in 2009, the SweeTango is considered a successor to Honeycrisp apples due to its sweet and tangy flavor profile with hints of honey, spice and citrus, and a crisp, snappy bite. The medium-sized fruit displays a deep blush red over a yellow background, and was created by crossing Honeycrisp and Zestar apples. In Washington, it's grown by Wenatchee's Stemilt Growers, who say SweeTango is now available at several Inland Northwest grocers, including select Rosauers, Yokes, Trader Joe's and Walmart stores. SweeTango won't be around for long, though, as distribution of this season's inventory begins to taper off in late October. (CS)

Historic Iron Horse Bar & Grill in Coeur d'Alene has a new chef-owner, plus other food news