You don't want to get on the bad side of Indiana Jones. He'd likely pull out a pistol and use it. And it's not a good idea to get Han Solo angry. He could easily sic his Wookie on you. Ruffle the feathers of Jack Ryan and you might get a fist to the face.

And so it goes with Harrison Ford, who's played all of those characters in films. His normal demeanor is calm, his everyday voice is hushed. But ask him a question he doesn't like, and his eyes narrow, his face flushes, his little gold earring quivers slightly as he shakes his head.

In his 30-plus years in feature films, Ford has always been shy about discussing his off-screen life. So when he enters a hotel room to talk about his new cop comedy Hollywood Homicide with a small group of journalists, and one goofy reporter almost immediately asks him about his love life, Ford just glares at him.

"Come on," he says quietly, not hiding his annoyance. "I never have been comfortable talking about my personal life. And it's a little too late to start now. Thanks for the thought, I'm very happy, and I think we'll let it go at that."

But the fool doesn't take the hint and asks where the line should be drawn; asks how much of Harrison Ford is public property to his fans and how much should be personal.

Ford has been through this before. There's silence, then a deep breath.

"Celebrity journalism is an obsession with celebrity that is serviced by a large portion of the press," he whispers gruffly. "I think that's very corrosive. I've been in the public eye for over 30 years. My private life is none of anybody's goddamn business."

The heat in the small room rises, the tension is almost unbearable. Someone asks a question concerning the longevity and success of Ford's career. Thank goodness it's a question he likes.

"It's happened a day at a time, with a lot of dumb luck," he says, his voice slightly brighter. "There are a lot of people as talented as I was who never got the opportunities, who never had the luck that I've had. I'm well aware of that. But I've worked hard, I think I've made some reasonably good choices, and I've had a clear idea of how the business works, and how to take care of myself."

Hollywood Homicide pairs him with Josh Hartnett as police partners who are trying to solve a mass murder at a nightclub. That central plot is serious, but the film turns into a comedy about the two cops trying to juggle second jobs -- Hartnett's K.C. plays a struggling actor, Ford's Joe sells real estate.

"I try to do a mix of different kinds of genres, different kinds of characters," says Ford. "When this came along, I thought it was a nice contrast to K-19. I haven't played a character that has that much comic opportunity in this form -- a kind of comedy where you could push it to the edge -- in a while. The comedies I've done in my career have mostly been romantic comedy where I'm more of the straight man. This was a chance to go a little further. I enjoyed that."

He also likes getting away from the collaborative process of Hollywood and finding solitude. He loves flying his small planes so he can escape from the everyday hubbub. He still does detail-oriented carpentry work -- for himself -- whenever he has the chance. And though he now lives in Los Angeles, the environmentalist within him still pines for the land in Wyoming that he bought around 20 years ago.

"It was pretty much untouched," he says. "It had been used for cattle, but was also being shared by a lot of wildlife. So I took that and put a conservation easement on it. That seemed a very good way of protecting what I valued in the land."

But he's also not afraid to speak up for himself, and says he's not bothered if he gets in trouble for something he believes in.

"When I first started in movies, people weren't all that eager to hear what I thought, how I might improve things," he recalls. "People didn't want to hear from somebody that wasn't critical to the film. But that started to change a little bit around the time of American Graffiti, when I worked for the first time with George Lucas. He wanted me to get a crewcut, and I suggested a white cowboy hat instead. And that was the first time that anybody listened to what I was saying and thought it was a good idea."

Speaking of Lucas, Ford says the script for the new Indiana Jones film, which Lucas will produce and Steven Spielberg will direct, is just about ready.

"We're about 80 percent through the process," he says. "Steven's got the script now, and I'll get my hands on it in a couple weeks. We should start shooting it in the summer of 2004. I think it'll work." 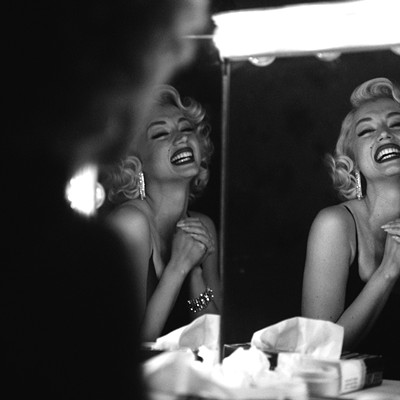