The first bite of the bacon-wrapped meatloaf served at Nectar in Moscow bursts with flavors you might not expect from a dish often considered a humble meal.

Emily Dickinson said of poetry: “If I feel physically as if the top of my head were taken off, I know that is poetry.” This dish is a haiku, a sonnet and a sestina of food combinations.

Imagine an orchestra performing: you notice some of the notes from some of the individual instruments, but it all fits together so precisely that what you mainly hear isn’t a cacophony; rather, it’s organized noise. It tastes like that.

To discuss one meal everyone must slowly, mindfully savor, I have to admit that there is the possibility for what seems like hyperbole, but I’m shooting for vivid honesty.

This entree has been on the menu since Nectar opened in April 2007, and, according to Nikki Woodland, chef and co-owner of the restaurant, it remains one of the most popular. She says that she likes to change the offerings occasionally, but when she’s tried to take the meatloaf off the menu, patrons asked for it to come back.

“People love comfort food,” Woodland says. “The dish is familiar, but done in a way you can’t do at home.”

One reason that the dish towers above its competitors is that it is a combination of pork and locally farmed, grass-fed beef. This is mixed with caramelized onions and fresh herbs, and the loaf is free-formed on a sheet pan then baked. Each serving is grilled to order, which adds another nice level of texture.

Nectar’s use of bacon here is pitch-perfect. The slices of this flitch are salty, meaty and cooked well-done, while remaining tender to the knife.

One minute the powers-that-be were warning about a potential pork shortage, and the next we’re told that that’s all hogwash, our stocks of swine are fine. The initial threat seemed to put folks in a tizzy, probably because the infusion of bacon into contemporary cuisine has gone so far that it has created a plethora of weird meat-meets-saccharine food combos.

This isn’t like that. While there is a ting of sweetness from the family-raised honey in the accompanying barbecue sauce, the smoke, tang and spice of the chipotle comes through for a more balanced range of flavors.

Don’t ignore the side dishes, though.

The Yukon gold mashed potatoes are sweet and creamy, but thick enough to hold up to the meatloaf. Here’s what makes them special: they’re mixed with a little garlic confit oil and seasoned with the kind of precision you don’t see on any of the Food Network’s slate of epicurean game shows. Sized between “baby” and more “mature” specimens, the carrots are sweet with a slightly roasted char. They taste fresh and have a nice snap to them with each bite, offering more textures.

Do yourself a favor, friends: put this dish on your bucket list, and get to it before you regret it. This meatloaf is so good that you’ll be forced to lie to your grandmother when she asks how her own recipe compares. It’s so good, you’ll fall in love with the second-to-last bite, because with it, as it literally begins to become a part of your body, you’ll know there’s one more piece of pyrotechnics to go. 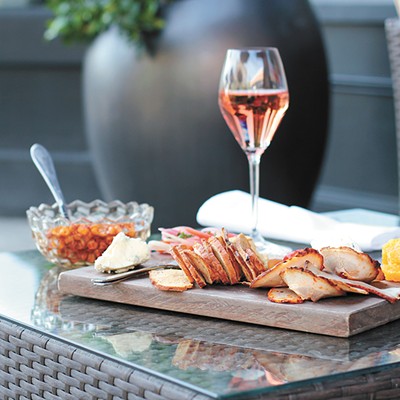