The Spokane Party Trolley lets you pedal your appetite around downtown 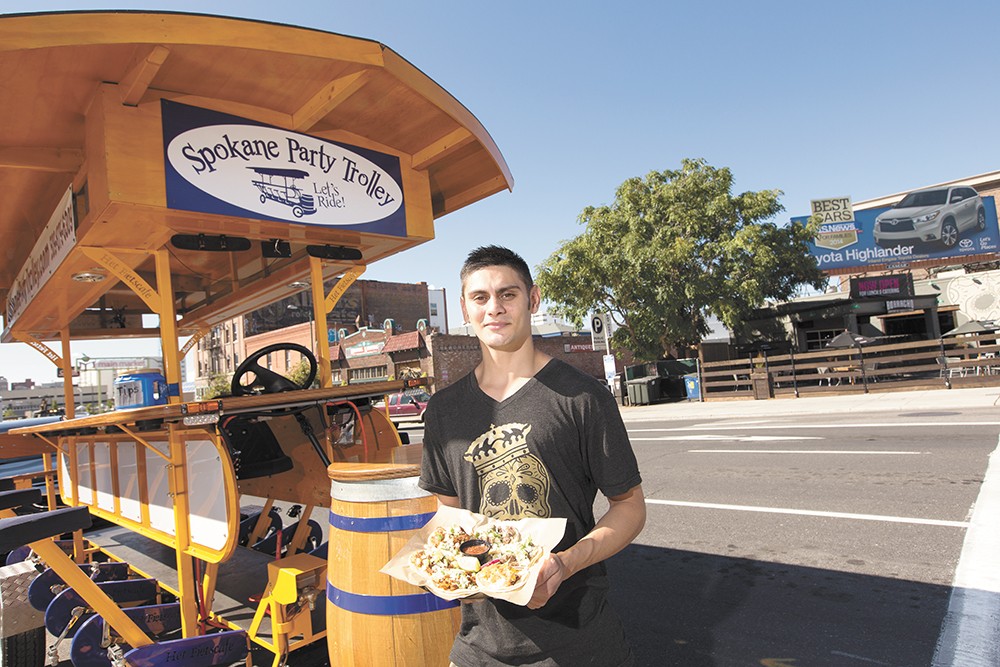 As they begin to pick up speed, the giggles start to flow freely and out come the party horns.

You've probably seen the Spokane Party Trolley. Since its inception, it's not only helped tourists and locals alike see Spokane in a different way, but also take them to places they might not encounter otherwise. For the first few years of the trolley, it was all about bar-hopping and maybe even imbibing along the way. But now, owner Nina Kindem has envisioned the possibilities of the eight-person-powered vehicle as a way to check out the city's cuisine.

When Kindem purchased her first trolley, she had no intention of making drinking while aboard the focus. "It was equipped for drinking, but my original plan was to support local businesses and collaborate with them," Kindem says. Now, the Party Trolley is doing just that. When the Washington State Liquor Control Board stopped allowing drinking aboard, Kindem was encouraged to work with local bars, wineries and restaurants.

When passengers aren't sure where they want to go, Kindem suggests her VIP stops, where they can enjoy discounted food and drinks while bringing more traffic to downtown businesses.

Young Kwak
Party Trolley riders out on the town in search of food and drink.

"People say 'I haven't been here before' at about a third of the stops I take them, but after, they tell me that they'll be going back," Kindem says. She's excited that they are actually returning. She frequently sees past passengers at VIP stops when she brings in new groups.

But again, Kindem says, it's not just about bar-hopping.

The sightseeing route allows riders to pick a few stops from a map highlighting worthwhile views, buildings, parks and historic sites that the trolley can get to easily. Groups may also try one of the three recently launched routes.

Kindem described the "Power Lunch" route as a way to get employees "off their monitors and out for a little exercise." Pre-ordered Brooklyn Deli sandwiches or New Leaf Bakery platters will await the pedalers when they are picked up at their downtown office, and after biking to Riverfront Park to enjoy their picnic, they head back to the office within the hour. This route is designed for groups of 10 to 15.

The "Tasty Pedaler" is a progressive dinner-style route where "local restaurants have a chance to show off," Kindem says.

Currently, six downtown eateries on the route will offer passengers a few bites, but Kindem says that like her VIP pub crawl stops, she is always eager to work with new businesses.

Passengers can sample local Mexican food on this route, with street tacos at Borracho Tacos & Tequileria and mini sopes at Mi Casa. Bacon macaroni and cheese at Zola, mini cheeseburger sliders at nYne Bar & Bistro and a baked meatball with sauce at Luigi's Italian Restaurant will be followed by a surprise dessert at Main Market Co-op. The "Tasty Pedaler" currently takes place from 6 to 8:30 pm on Tuesdays.

For those who would rather sample sips than bites, there is also a new "Winey Pedaler" route stopping at Vintage Hill Cellars, Emvy Cellars, Bridge Press Cellars and Whitestone Winery on Saturdays from 12:30 to 2:30 pm and 3 to 5 pm.

Beyond all of the Party Trolley's route ideas,

Kindem says that she cannot stress enough how flexible the entire experience is. The trolley is always willing to let groups get creative with their ideas. Passengers can customize their experience down to choosing the music in-between stops, with a radio, CD player and iPod jack available.

Even though it will start to get colder in the next few months, the trolley will keep on rolling as long as the roads are clear. Winter rates run from November through the end of March.

"It's about being together and getting exercise," Kindem explained. "It's ridiculous, and honestly it's fun." ♦