Sanders is hospitalized for heart procedure and cancels events 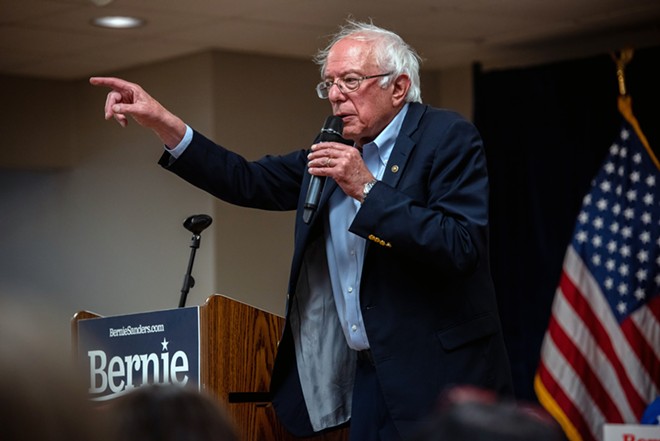 Hilary Swift/The New York Times
Sen. Bernie Sanders (I-Vt.), a candidate for the Democratic presidential nomination, campaigns in West Liberty, Iowa, on Sept. 24, 2019. Sanders is being treated for an artery blockage and canceling his events for the coming days, a campaign official said on Wednesday, Oct. 2, 2019.
By Sydney Ember and Jonathan Martin
The New York Times Company

Sen. Bernie Sanders was hospitalized and treated for an artery blockage and is canceling his events for the coming days, a campaign official said on Wednesday.

“During a campaign event yesterday evening, Senator Sanders experienced some chest discomfort,” Jeff Weaver, a longtime adviser to Sanders, said in a statement. “Following medical evaluation and testing he was found to have a blockage in one artery and two stents were successfully inserted. Senator Sanders is conversing and in good spirits. He will be resting up over the next few days. We are canceling his events and appearances until further notice, and we will continue to provide appropriate updates.”

Sanders, 78, was traveling for a gun forum in Las Vegas that other candidates were also scheduled to attend. He was to travel to California later this week. He is currently recovering in a Las Vegas hospital, the campaign said.

One campaign aide, referring to Sanders, told The New York Times on Wednesday morning: “He feels better than ever because that’s how people feel after they get a stent and there’s more blood flow.”

The onetime captain of his high school track team, Sanders has tried to project an image of fitness as a candidate. He pitched in the softball game his campaign staged over the summer on Iowa’s “Field of Dreams” and his aides have released other images of him playing catch or shooting a basketball.

Sanders has not yet released his medical records though he has vowed to do so. During his first presidential run, he released a letter from his doctor declaring that he was in “very good health.”

Not long after news of Sanders’ hospitalization emerged, several of his rivals for the Democratic nomination sent good wishes his way with posts on Twitter.

“Bruce, Team Warren, and I are sending all our best wishes for a speedy recovery to @BernieSanders,” Sen. Elizabeth Warren of Massachusetts said, referring to her husband, Bruce Mann. “I hope to see my friend back on the campaign trail very soon.”

“Glad to hear my friend @BernieSanders is doing well and in good spirits — wishing him a speedy recovery,” Sen. Cory Booker of New Jersey wrote.