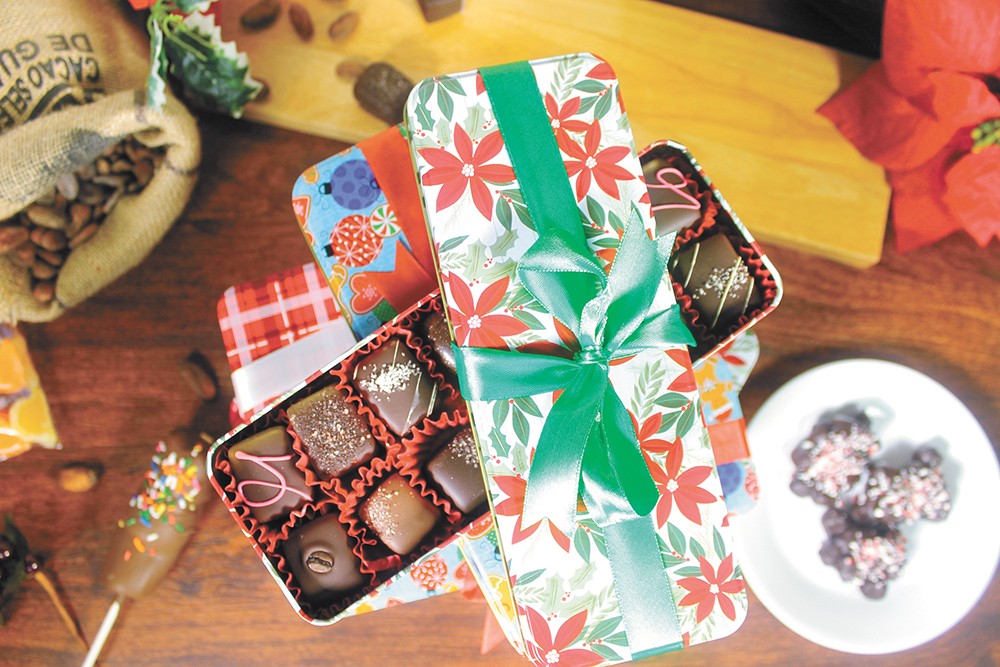 The melting point of chocolate is somewhere between 86 and 90 degrees, just below body temperature. Beyond that, it can burn. So when a fire ripped through Sandpoint Chocolate Bear this past February, the chocolate was obliterated, yet the spirit of the company persevered.

"We spent a whole year looking for the perfect place," says Dennis Powell, who opened Sandpoint Chocolate Bear in 2012 with wife Carrie. They acquired Spokane's Chocolate Apothecary last year, and stocked both locations with the from-scratch sweets they produced in Sandpoint.

The Powells could find nothing comparable to their former location — one of Sandpoint's busiest downtown corners and steps from City Beach — in a building that has since been condemned. Yet within six months of the fire, the couple converted a Spokane Valley house they owned through Dennis' construction company into their new production space.

They kept Sandpoint in the name, Dennis says, because they plan to someday return.

In the meantime, the Powells are doing what they've done from the outset: figuring stuff out. They purchased the former Coeur d'Alene Chocolates' molds and old Spokandy display cases, the latter's logo still faintly visible.

"That's how sustainable we are," says Dennis, pointing to the case.

The business also needed all new equipment, like a fudge cooker and a grinder to make cocoa powder for its popular drinking chocolate ($4/cup or $10/half-pound).

Some tools had to be improvised. The Powells roast and shell their own beans, for example, which they source from all over: Mexico, Fiji, India, Bolivia, Honduras, Sierra Leone, Peru, Madagascar and Tanzania. To crack the husks, Dennis cobbled together a tool attached to a drill motor and rigged a blower to winnow the husks from the crushed cacao beans, called nibs.

Nibs are sold ($15/half pound) and used in specialty items, like Dennis' single-origin chocolate Bean2Bars ($5).

Dennis is the maker, he says, referring to his tools and Bean2Bar, but Carrie is the chocolatier.

Armed with a can-do attitude, boundless curiosity and her certification through Ecole Chocolat Professional School of Chocolate Arts, Carrie does the bulk of the production.

When she makes caramel, for example, it's 12 pans at a time. The product sells quickly, although the shelf life is easily a month, she says. Caramel is available per piece ($1.24) or in gift boxes, like a 15-piece salted caramel set ($25) and a nine-piece "stocking stuffer" ($16.50) of caramels and truffles, another popular item.

Carrie also makes hard and soft brittle ($5), assorted flavors of bark including marshmallow and peppermint ($8), and specialty items inspired by everything from the season to things she sees in books, and reimagined combinations of familiar ingredients like her new Grizzly Bear peanut butter cups ($5).

Yes, admits Carrie; she really is like a kid in a candy store at her job. She and Dennis also receive a lot of help, including from their children.

"And we have a lot of people volunteer for quality control," she laughs. ♦

Spice It Up: Cooking with cocoa