Point Juncture, WA is practicing the sound — and lifestyle — of a bygone era: the ’90s. 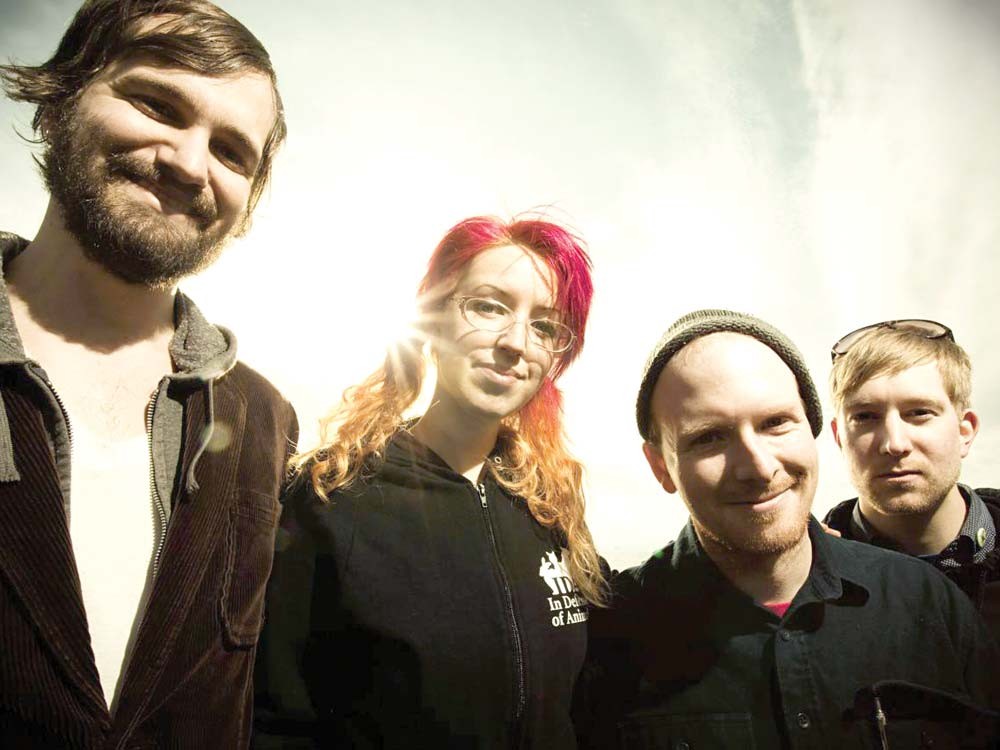 The Northwest music scene has changed a lot in the decade that Portland quartet Point Juncture, WA has been together. Nowadays, you can hardly walk down the street without stumbling over a bearded troubadour gently strumming an acoustic guitar or plucking a few melancholy notes on a banjo.

That strain of indie folk that Portland has become known for is a far cry from the streamlined power chords and surging keys that are the hallmark of Point Juncture’s sound.

“We’re waiting for the ’90s rock scene to be hip again so what we do is cool,” keyboard player Victor Nash says with a laugh, recounting a recent trip to the record store in search of the new Low and Sea and Cake albums. “They didn’t have either of them,” he says.

Point Juncture, WA is made up of four songwriters: Nash, singer Amanda Spring — who also drums — and guitarists Skyler Norwood and Wilson Vediner. (Their band is not named for a real place. “We wanted it to sound like a small town,” says Nash.) They write collaboratively, with four distinct approaches and personalities.

“Everyone brings something different, and the records reflect that,” Nash says.

While in the past there hasn’t been a strong process to their collaboration — “a song will be generated out of an improvisation and instruments arranged on a random basis on a particular day”— things changed during the writing of their most recent record, Handsome Orders, released last month.

“The songs on this record came out of a conscious effort to do the same thing more than once,” Nash says. “We spent six weeks on tour with the Thermals, and getting to watch a really tight three-piece rock band inspired us to try and use repetition a little more than we have in the past.”

“We were trying to keep up with them,” he says.

The result is fewer of the keyboard-laced experiments of past records and more tight three-minute pop songs like “Violin Case,” a must-hear song filled with punchy guitars and anthemic vocals reminiscent of Blue-era Weezer.

The band’s commitment to the DIY movement has led to some interesting places. In the course of their career, they have lived together in a shared house as full-time musicians, spent time gardening and recording in their self-built studio in a former barn, and committed to camping rather than staying in motels while on tour. They’ve spent days spray-painting CD covers.

Originally this commitment to carrying out every step in the process came out of financial necessity, says Nash. But now, he says, “we’ve been doing this for so long, it’s the only way we know how to work.”

And while they’ve changed their tactics a bit since their earliest days (they now have the backing of a PR company and the support of the small, Seattle-based label Mt. Fuji Records, which put out their last two albums), Portland has changed, too. Now bands move there in droves, hoping for the cachet that comes from making it in a city that’s home to indie-rock luminaries like Stephen Malkmus and Britt Daniels. But while the city may have changed in many ways, Portland, like Point Juncture, WA, has stayed true to its roots.

“I still see a lot of what inspired me nine or 10 years ago,” says Nash. “It’s a community that supports other bands, and everybody’s looking out for everybody else.”

Now, if only Archers of Loaf would sell out a Portland date and college radio would take the airwaves back over, they’d be set.