Get Lit! 2017: Laila Lalami talks about her dual selves and the "silences" that fiction can fill 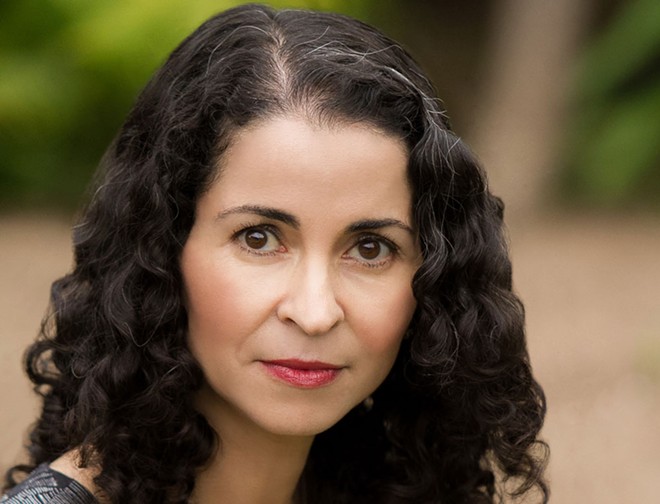 Not 24 hours before being interviewed for this article,

Laila Lalami published a short essay in the Los Angeles Times. She opened with a bold confession: "Reader, I have two selves."

The piece went on to sketch her ambivalence toward the life of a writer, particularly that of a female writer, in this early part of the 21st century — an era in which audience engagement through social media and relentless self-promotion are de rigueur for public figures, and detailed personal information is easily accessible online. Citing her own experiences with fans sending her mysterious packages or even tweeting photos of their genitals, as well as the controversial unmasking of Italian author Elena Ferrante in the name of "gaining insight into her novels," Lalami lamented that readers' interest can go several steps too far: "Sometimes that curiosity feels insatiable or invasive."

This conversation is a timely one, given that Lalami is scheduled to speak about her newest book, 2014's The Moor's Account, on April 19 as part of Get Lit! "It is a performance, of a kind," she wrote of festival appearances in that "dual selves" essay, and she closed by saying, not without betraying a hint of relief, that her performance ends when "I can go home, reclaim my private self, and return to the work I love: writing."

"Book people are my people. I love meeting with readers. I really can't imagine a better time," she says over the phone the following morning.

"Where it gets a little bit trickier is where it's so fun that people start to go from asking you about the book, or the process of writing the book, to asking you details about your life. The reason I wrote that piece [in the L.A. Times] is because it really did come to me as a surprise that people were so curious about the author. I just very naïvely thought, well, they have the whole book, they can read it.

"And, you know, I am on social media. It's not as if I'm some kind of hermit. I'm absolutely on social media, and I talk about myself, but I remain ambivalent ... about how much of our lives nowadays is just sort of offered up."

To be sure, Lalami hasn't abstained from drawing on her personal life in her writing.

In a 2015 essay for the New York Times Magazine titled "My Life as a Muslim in the West's 'Gray Zone'," recently re-shared on social media when it saw newfound relevance in light of national events, the Moroccan-born author spoke about her husband and especially her daughter — her age, her hobbies, her personality.

Lalami acknowledges that those disclosures might blur the distinction between her public and private selves, but she says that they're justified in two ways. The first is that the personal information, which was only introduced in later drafts after back-and-forths with her editor, led to a stronger, more compelling essay. The second is that some details should be revealed only on the writer's terms.

"If I were to ask you, 'Who are you?', you would have the freedom to say, 'Well, I am such and such a person.' You could give me your name. You could say, 'I'm a journalist. I'm a reader. I'm a resident of the Pacific Northwest.' Or you could tell me, 'It's none of your business who I am.' And that is what I'm talking about: the freedom to decide what it is that you reveal, and what it is that you conceal or keep to yourself."

This matter of fame versus anonymity

is further vexed by the deep-seated human tendency to look to prominent figures — writers included — for reassurance in times of wider uncertainty, as if omniscience were an incidental perk of elevated social standing. For an author who says she's "not a stranger to how politics affects our lives" and whose debut novel was fittingly called Hope and Other Dangerous Pursuits, Lalami sees this as a natural but potentially misguided reaction.

"I think there's such a sense of despair about politics. People feel powerless. People feel that they have voted for certain representatives, and they feel that the policies that are enacted don't really reflect what they voted for. And I think what happens in a situation like this is when people read a piece of nonfiction and they find that it touches on the same despair that they feel, they turn to you and ask for direction.

"And the thing is that the writer is not a prophet. The writer is not someone who can provide salvation or tell you, you know, if you do this thing, we will be saved. Obviously, I have ideas about the state of our politics," she says, laughing, "and I obviously love to engage with them. But I write mostly to question and to understand and to figure things out."

In her third, most recent novel, this act of questioning and comprehension addressed "gaps and silences that were present in the historical record." As a way of filling those voids, she wrote The Moor's Account from the point of view of a seemingly incidental character — Estevanico, a black Arab slave who was one of four survivors of the 1527 Narváez expedition through what is now Florida and along the Gulf of Mexico.

"The historical record erased a number of details and a number of things that happened. But because this is fiction, and because my character was sort of an interloper," Lalami says that she was able to find a kind of "freedom" in the omissions and interstices. She was able to describe the "forms of torture" that explorers used to coerce the indigenous people to work as guides, to find "individual characters" among the native population we only know now collectively as tribes, and to the reinstate the "presence of women" in these tales of conquest and adventure, where their absence is a matter of neglect rather than fact.

"These are all silences that the canvas of fiction enables me to fill, enables me to write about, to confront," she says. Her private self has already done that in the novel. Her public self will discuss it in Spokane on Wednesday. ♦