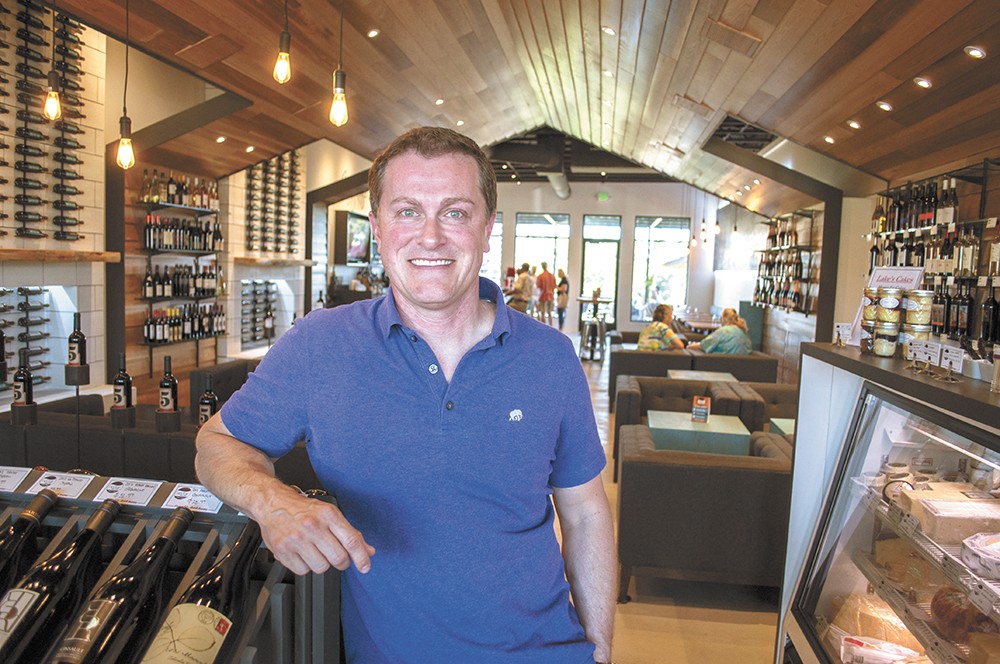 There's no music on the patio

at Nectar Wine and Beer.

Nectar's management, and that of the adjoining Veraci Pizza, don't plan on adding a sound system any time soon. They'd rather have you drink your wine or craft beer while also drinking in the view of the Spokane River and the downtown vistas without the distraction of a soundtrack. There's some beauty in that simplicity, says Nectar owner Josh Wade, who also owns the downtown Nectar Tasting Room. It's a philosophy that's worked out for the new Kendall Yards bar in its first month.

The bar's interior, crisply designed by popular Inland Northwest restaurant building firm HDG, features a false A-frame roof, giving the space a cozy and less boxy feel than its exterior might suggest. There are comfortable lounge-style seats and tables and a long bar, but this time of year, Wade says most folks are opting for those patio spots.

There are some 300 bottles of wine available at Nectar, and another 100 cans and bottles of beer in a cooler for either to-go or to drink on site. As far as to-go beer coolers go, this one is as deftly curated as you're likely to find in Spokane, full of hard-to-find offerings from local and regional breweries, with plenty of heavy-hitting craft megastars mixed in.

"We need to make those 100 spots something people aren't going to find at a typical grocery store," says Wade of the beer selection overseen by Nectar manager and beer steward Ben Simons.

Behind the bar, there are 16 beer taps, six of which are occupied by No-Li Brewhouse for all of June. Each month, Nectar plans to feature a half-dozen beers from a particular brewery, with Orlison filling up the taps last month. The idea, Wade says, is to give customers the chance to taste a wide spectrum of a brewery's output.

"We wanted to make sure we gave people the brewery as a whole," says Wade, adding that the only criteria for taking over the taps is to have packaged beer that people can buy to take home if they enjoy what they sampled from the bar.

Nectar also has opened enrollment in its wine and beer clubs. For wine, members have the option of between one and three bottles per month, with prices ranging from $15 to $90 per bottle. On the beer side, a spot in the club gives members the option of up to three growlers monthly at $12.99 per.

With the burgeoning Kendall Yards neighborhood serving as home to five spots dishing up full meals, Nectar is fine with offering a very limited food menu of items like cheese plates. Wade says it's OK to be just a wine and beer spot.

"Not having a full offering of food might be thought of as a deterrent, but I have no intention of getting into the restaurant business," says Wade, who adds that they happily allow outside food inside Nectar. ♦