The first indication things are different in Sleater-Kinney's world comes with the first notes of their new album, The Center Won't Hold.

It's the title track, and while a woozy buzz creeps in the background, an industrial sledgehammer clang punctuates Carrie Brownstein's dark opening lines: "I need something pretty to help me ease my pain / I need something ugly to put me in my place." Two minutes in, the tech-heavy approach falls away in favor of a frenzied rush of guitars and drums while band co-founder Corin Tucker takes over, wailing the song's title over and over like a punk-rock mantra.

In that song, you'll find everything about where Sleater-Kinney is in 2019, nine studio albums in and 25 years after forming in Olympia. In that final minute, it's the Sleater-Kinney fans know and love — the distinct vocals of Tucker and Brownstein, the aggressive guitars of both women grounded by the firecracker drumming of Janet Weiss. In those first two minutes, though, it's a whole new approach, abetted by producer Annie Clark (aka St. Vincent).

Here's the thing: When The Center Won't Hold arrived Aug. 9 and one could hear the whole album, it had everything you could want from Sleater-Kinney. There are songs of poppy perfection ("Love"), intense ballads ("Broken"), expansive experiments ("RUINS"), adding up to a winning collection from a band intent on pushing themselves in new directions.

This interview has been edited for length and clarity.

INLANDER: You started your last tour in 2015 in Spokane, too, that one after the band's hiatus. Do you have specific memories of that show?

TUCKER: It was an intense experience, because we were so nervous. We hadn't played together for almost a decade, and we just had no idea what the reaction would be, if anybody would care, if anybody would be there. And it was a great show! There were people who, like, flew in for that show!

You played a couple of weeks ago. How nervous were you, with a whole new album to deal with, and three other people on stage with you and Carrie?

We were nervous for that, too. And we had the added complexity of Hurricane Dorian outside, so we were worried the power was going to go out, too. So, lots of pressure, but it went really well. The songs really kind of came to life in the live show like we were hoping. It's one thing to make an album and kind of construct the songs a certain way, but when you perform them live, sometimes you can play with them a little bit, giving them a little teeth. 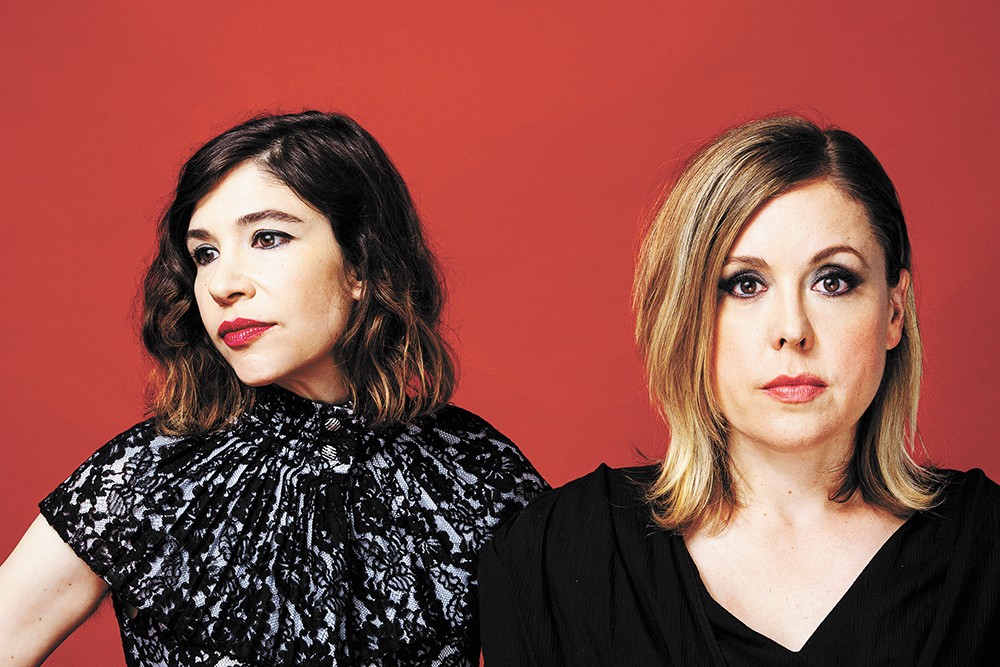 You made The Center Won't Hold in a different way, with you and Carrie writing separately, collaborating with St. Vincent. Why were you craving a change?

Being able to take risks with your music or your art and try different things that you might be interested in, I think that's something we've done with a lot of our albums. We wanted to try something different, wanted to take the band to a new place. I think we've always been those kind of writers that want to try something different. There was kind of a fun, almost theatrical element that we're able to do with this record.

You've mentioned seeing a Depeche Mode show and being inspired for this album. How so?

Their longevity is really the kind of classic songwriting that they do. "Personal Jesus" is just one of the all-time classic songs. And that song is such a great collaboration between guitar riffs and synthesizers. I found that kind of inspiring, thinking, "Oh, we're working with St. Vincent, and we're trying to do something different with instrumentation. How do you write those kind of lines that really, really work in that setting?" They're such a fun band live, as well. People love their music even years and years later.

Chemistry is so important for a band. How did you pull it all together after Janet left to make this tour happen?

Obviously we knew Katie [Harkin] because she toured with us on No Cities [the band's 2015 album No Cities to Love]. We knew we needed another player that could do keyboards and occasionally guitar, and we've known Toko [Yasuda] a long time. She's a very accomplished musician, back from the Blonde Redhead days. She's played with St. Vincent on the road as well.

Finding a drummer was... you know, tough. Really tough. Janet is an amazing drummer, and her drum parts are very, very challenging. It was actually my husband, Lance Bangs, who said, "Hey, there's this amazing drummer from Brooklyn who was actually in a Sleater-Kinney cover band." Before we got back together and did the No Cities record, during the hiatus, there was a Sleater-Kinney cover band in Brooklyn! And they were really, really good. So we flew Angie [Boylan] out and she blew us away. We got so, so lucky. And she knows our catalog, you know? She's already played a lot of the songs.

You and Carrie have talked about the responsibility you feel with the band and its reputation. Does that play into when you decide to make an album? Does the political moment push you to work with the band?

That might be a factor, but more of it is really that we just really enjoy it as an outlet, a creative outlet. That is really the biggest piece of it for us, that we find a lot of joy in it. We like to write and we like to be able to express ourselves in that way. It's a really unique way to be able to voice your opinion, to have it heard and be blasted through a microphone, literally as a way to make your voice heard and your opinions heard. It's always something that's really empowering. And I think that especially when you're dealing with our kind of political and cultural moment, yeah, it's extra cathartic to be able to write and create.

As a music lover, have you found it to be something you look to for getting through trying times in the political or cultural scenes?

Oh yeah, absolutely. It's kind of a critical element for me, in music I identify with or that I reach for. There has to be an element of a real response to culture and politics that I feel like I can identify with. Since Trump's election, it's such a weird place. More than ever, as our society is kind of more isolated because of our relationship to technology sometimes, I feel like music is kind of a safe space for people to go to find others like themselves, or find some kind of support for who they are, who they might want to be. I think that's really important. ♦