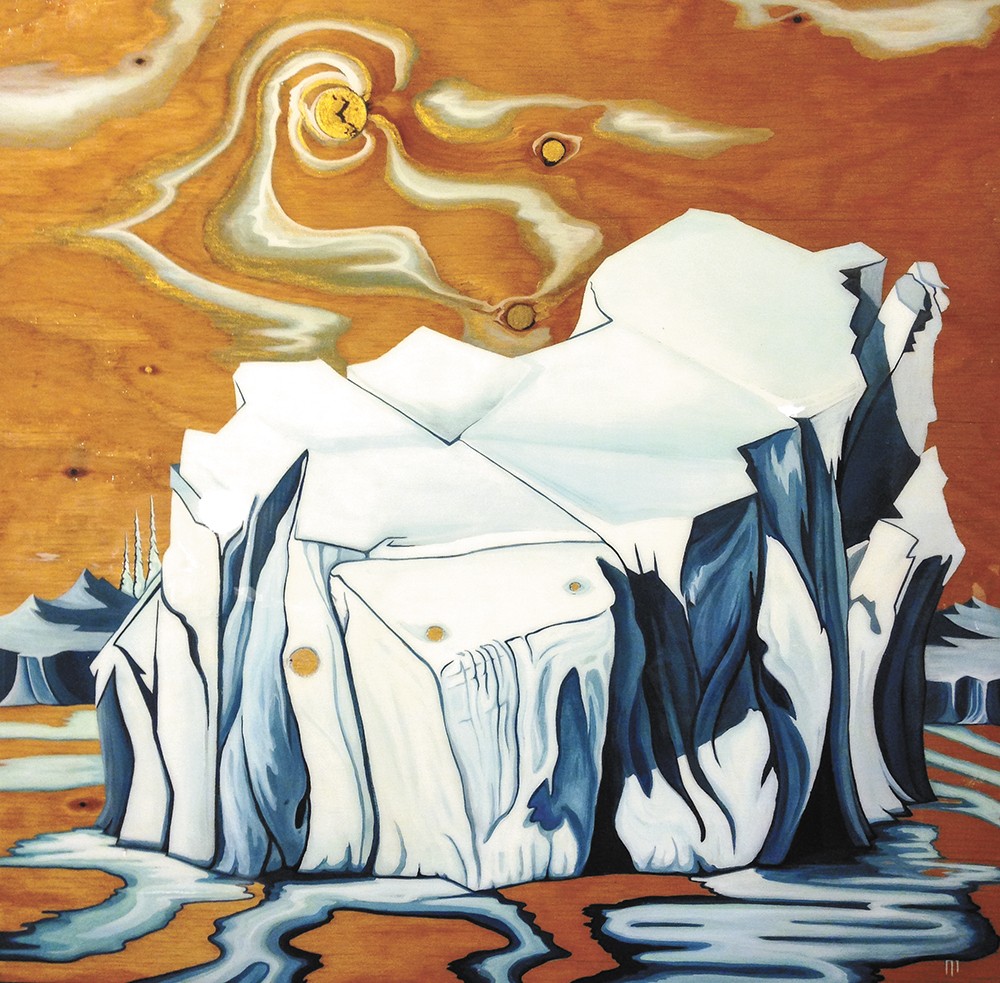 "Meltdown": one of Lori LaBissoniere's many snow paintings.

On the back of Lori LaBissoniere's business card there is the oft-cited Confucius quote, "Choose a job you love and you will never have to do a day of work in your life."

She's tried to stay true to that motto.

"I didn't know what I wanted to do when I graduated from college, and that's what I've been struggling with ever since," she says.

Now, the 2002 Gonzaga art graduate is back in Spokane, trying to align her two big passions — snowboarding and art. Throughout college and afterward, she focused primarily on traditional art, preferring to paint on wood. At that time, she saw graphic design — how snowboard art is created — as compromising her passion.

"I used to think that was selling out just because I wasn't able to be an old-school artist, just using my hands and a paintbrush and reclaimed surfaces," LaBissoniere says. "I also didn't want to be on the computer all day."

Her art is clearly influenced by snowboarding. It's generally set in nature and features flowing lines inspired, she says, by carving in powder.

LaBissoniere's first experience designing snowboards came last year during Bend, Ore.'s annual Dirksen Derby Kickoff Party and Broken Board Art Auction, a fundraising event for a local border paralyzed in 2007. She says she used wood and acrylic paint as her media. The boards were meant as art pieces and were auctioned during the event.

Although she's had traditional art shows all over the Pacific Northwest, and her swirling mountainscapes are seen on walls around Bend, her former hometown, LaBissoniere says making a living that way is just too hard, which is why she began working on snowboard designs.

She's still painting, though. Her art will be on display next month at the Rocket Bakery in the Garland District.

For seven years she taught art in a middle school in Bend, but says that was compromising her own creative expression. She was injured several times while snowboarding, which helped her tolerate sitting in front of a computer.

Now she sees creating art that's featured on the bottom or top of snowboards as a way to reconcile her two loves.

"I've gotten so much inspiration from snowboarding that I really want to put that into my art," she says.

She's still learning the tools necessary to create snowboard art. Although she still wants to do "traditional" art, she hopes to make a living as a freelance snowboard designer.

That's not an easy route, she says. Unless you're a fairly famous artist, companies require that you do all of the graphic work. Even then, it depends a lot on who you know. That, she says, is probably her biggest advantage: she's well connected in the snow world.

For snowboard companies, and the shops that carry them, the art is often a determining factor for buyers.

"If it's a good snowboard but the graphic sucks, it probably won't sell very well," says Eli Coski, a manager and buyer for Wintersport.

For now, LaBissoniere is in Spokane studying graphic design. Throughout January and February, she plans to show her work locally.

"My students used to ask me, 'Ms. L, what do you like better? Art or snowboarding?'" she says. "That's a really hard question." ♦