Spokane County is suing to block the expansion of its commission; some argue that the move is politically motivated

Spokane County Commissioner Al French scoffs at the idea that he's supporting a lawsuit to prevent an expanded county commission because he's worried about his own political future.

Last week, French, along with the two other members of the Spokane County Board of Commissioners, voted to sue the state of Washington — technically, they’d be joining a coming lawsuit from the Washington Association of Counties — over the statutory changes that were recently passed by state lawmakers.

Specifically, the new rules require that, starting in 2022, the commission be expanded to five members and that all of the members be elected by voters in their districts during both the primary and general elections — a significant change from the current system where candidates for board seats run countywide in the November general election.

French, who has long been a vocal opponent of the new law, said prior to the vote that the new law is unconstitutional and goes against the will of voters. He’s referring to a 2015 ballot measure to expand the county commission to five members that was shot down by voters with a healthy margin.

“The concern is that if the Legislature can alter the constitution and target one county, they can target all of us,” he said, going on to reference the “Spokane County voters have the right to determine their form of government just like any other county and that right has been taken away from us."

The other two county commissioners, Josh Kerns and Mary Kuney, concurred with French at the meeting before they voted on the resolution. “When I was out talking to voters this past year, this is an area that people talked about and weren’t happy about the change that was coming to them,” Kuney said. (Kerns, for his part, said that the lawsuit will bring certainty around the legality of the statutory changes.) 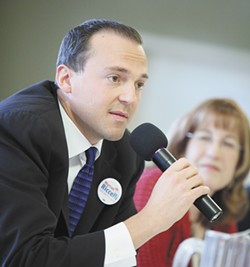 The bill, which was pushed by Democratic state Rep. Marcus Riccelli of Spokane during the past legislative session and got approved with bipartisan support among local state lawmakers, is framed by backers as a way to increase representation on the county commission, which currently consists entirely of Republicans. Another argument put forward by proponents is that with a three-member commission, any meeting between two of them constitutes a public meeting under state law, meaning that commissioners have to severely limit discussions with one another.

“It’s a head scratcher,” Rep. Riccelli says of the commissioners’ vote to join the lawsuit. “Their time [and] taxpayer resources should be spent on solving important public policy issues and not litigating legislation that will make Spokane better represented.”

Staff with the Washington Association of Counties say that they don’t have a timeline yet for filing the lawsuit. But Eric Johnson, executive director of the organization, says the association will be covering the cost of the litigation through dues that all 39 counties in the state contribute.


Unacknowledged by Commissioner French at the Nov. 27 meeting was the notion that his opposition to the legislation might stem from preserving his political longevity. Some supporters of the recent changes argue that the current system allows Republican candidates like French to win regardless of how they are districted, due to the fact that Spokane County as a whole leans conservative.


In the 2018 August primary, French lost his district — which includes Spokane and the West Plains — by a whopping ten points to Democrat Robbi Anthony, a 26-year-old transgender woman, tech business owner and political newcomer.

“He knew full-well that he could still win because it [the general election] includes the entire county … which is exactly what happened,” Ed Wood, chair of the Spokane County Democrats, says.

“He would have a tougher time being elected [under the new legislation]. That’s one of the things that he’s afraid of,” Wood adds. “It’s just not right that we have three-commissioner districts that are elected countywide because that’s not fair representation for the districts.”

In addition to calling the criticism “speculative nonsense,” French is quick to point out that he doesn’t know how the district boundaries will be redrawn under the new rules and that he could very well end up with a district that is more favorable to him in 2022. “It doesn’t benefit us. We don’t know what the boundaries will be,” he tells the Inlander, adding that democratic commissioners have won countywide before.

As the legislation is written, the redistricting process would be conducted by a five-person committee, four of whom will be chosen by legislators from both parties whose districts are within Spokane County. The fifth member will be chosen by a majority of the other four committee members.

Former county commissioners like Todd Mielke and Shelly O’Quinn argue that the board is doing the right thing by joining the lawsuit.

Young Kwak
Former Commissioner Shelly O'Quinn
O’Quinn, who has previously supported adding two members to the commission, says that not only does the legislation violate the state constitution and take away agency from county voters, it also fails to provide any county-wide accountability. “The current bill does not have a county executive, it’s district only, there’s no checks and balance,” she tells the Inlander. “If you look at King County, they have a county executive that represents the views of the entire county.”

Mielke, has a similar take. “Yes I want five [commissioners], but my preference is that you have five and each are elected the same way they’re currently elected,” he says.

In 2001, the City of Spokane adopted district elections for its city council, which current Council President Ben Stuckart says has resulted in more representation and diversity of perspective in the legislative body.

“When we didn’t have districted elections on the City Council prior to 2001, you just had moneyed interests represented on the City Council and the traditional areas of wealth were the areas where all council members came from,” Stuckart says. “When you don’t have representatives from areas then you ignore them in policy.”

But the Spokane County Commission has already set itself on a legal collision course with the state over the legislation, due to the Nov. 27 vote to join the lawsuit. “Do expect that this litigation will go all the way to the state Supreme Court,” Commissioner French told the room at the Nov. 27 meeting. “I don’t expect a quick ruling.”