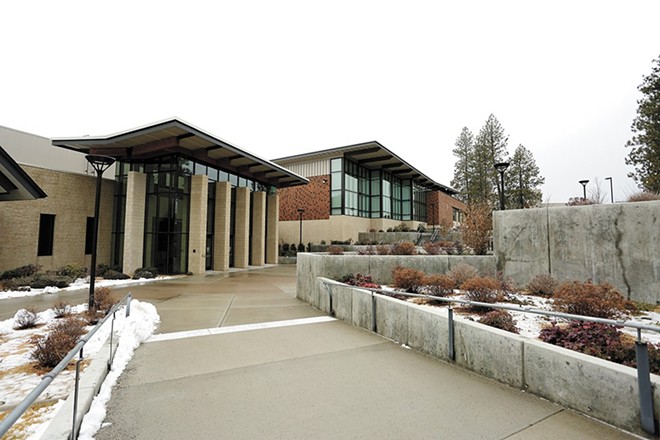 Young Kwak photo
A resource officer at Ferris High School controversially pinned down a black student's neck last year, sparking protest.
The Spokane Public Schools board will discuss a resolution on racial equity Wednesday night that would prevent any district employee from arresting a student.

The draft resolution states that the district realizes "that structural racism is built into the bones of our schools, as well as every structure in society. We have to build anti-racism into the bones in order to increase student empowerment, belonging, value, and hope for the future."

It also says that despite its mission to provide excellence for everyone, "this opportunity has not been made possible for every student."

The school board will discuss the resolution at its regular meeting tonight at 7 pm, held over Zoom.

One of those arrests includes a black student at Ferris High School, whose arrest sparked student protests because the campus resource officer arresting him pressed his shin against the teenager's neck while restraining him. When other students attempted to intervene, they were arrested for assault.

The resource officer, Shawn Audie, was a former Spokane County Sheriff's deputy who'd resigned in lieu of termination from the Sheriff's Office. He'd been accused of excessive force several times as a deputy, including an instance when he used the controversial neck restraint that killed a person in 2013. Spokane Public Schools said last year that it did not know of Audie's past accusations of excessive force until an Inlander story detailing the allegations. Audie resigned days later.

Resource officers in Spokane are issued a limited commission authority through the Spokane Police Department, and they're not armed.

The resolution to be discussed tonight says "Spokane Public Schools employees will not arrest students," adding that a new safety strategy will be proposed by June 24. The resolution also states that the district "will ensure oversight of exclusionary discipline" by developing an ombudsperson process to evaluate all long-term suspensions and expulsions.

Aside from discipline issues, the resolution sets a number of goals designed to reduce inequalities in education. As the pandemic has forced schools to move to online learning, it's created issues for students who don't have access to technology or who are dealing with other challenges impeding their ability to log in for class. The resolution says the district would propose a "new technology access model" by June 24.

The resolution also would have the district hire a consulting company to provide recommendations on how to increase the diversity of the work force. The student population in Spokane continues to grow more diverse, but the teaching population does not reflect that.

Other rules it would add include: establishing a policy for cultural responsiveness and anti-racism training for staff, increasing student voice "regarding issues related to racial equity," and designating a task force to provide recommendations on "equitable student-centered learning" by August.