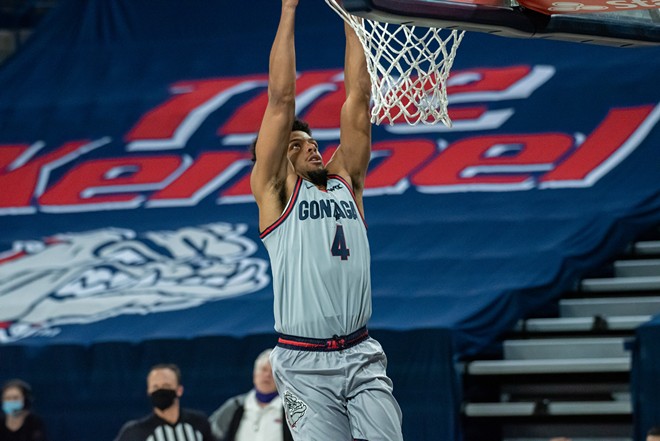 Erick Doxey
The Zags have been dunking on fools all season, and by "fools" we mean everyone else in the WCC.

It’s almost unfair what Gonzaga’s doing to the rest of the West Coast Conference.

On Saturday, Gonzaga took on a San Diego team that’s struggled through the season both on the court and off. Hampered by multiple COVID-induced pauses, the Toreros have managed to play just 11 games. It wasn’t expected to be a successful season, as San Diego was picked to finish ninth in the 10- team league’s preseason poll, but it’s been made more difficult by the stop-and-go schedule.

The Zags defeated the Toreros 106-69 in a game that showed just how far ahead the Zags are compared to the rest of the league. But it hasn’t always been this way.

San Diego was the last WCC team other than Saint Mary’s or BYU — programs that, like Gonzaga, are almost always in the NCAA Tournament conversation — to win a game against the Zags. That win was way back on February 22, 2014, exactly seven years ago today. Gonzaga has faced Loyola Marymount, Pacific, Pepperdine, Portland, San Diego, San Francisco and Santa Clara a combined 100 times since, and the Zags have won all 100 of those games.

Seven years of a buzzsaw cutting its way through the league’s bottom seven teams. But what about those other teams? Well, during the same span, Gonzaga’s gone 30-8 against Saint Mary’s and BYU. Far less lopsided than their 100-0 record against everybody else, but that doesn’t mean it’s much prettier.

Saint Mary’s came to Spokane last Thursday and got thoroughly trounced. For the first 30 minutes of the game the Gaels were turning the ball over more often than they were putting it through the hoop. The Zags took their foot off the gas with about 10 minutes to play and still managed to win by 22 points.

It didn’t used to be this way. The Gaels are the Zags’ arch-rivals. Longtime fans will remember when Saint Mary’s big man Omar Samhan was persona non grata in Spokane during the final years of the 2000s, and then the disgust that came watching Matthew Dellavedova and his mouthguard snap the Zags’ streak of conference titles in the first years of the 2010s.

In those days, Gonzaga versus Saint Mary’s was the biggest and best rivalry on the West Coast and among the greatest in all of college basketball. The legacy lives on, but the results look very different than they did back then.

From the 2006-2007 season through the 2011-2012 season, the year that Saint Mary’s won the WCC regular season and tournament titles, the Zags and Gaels played 16 games. Gonzaga won 10 and Saint Mary’s won six. That was the most competitive stretch in the history of the rivalry. The teams have met 24 times since, with Saint Mary’s winning just four of those contests. Not only are the Gaels losing far more often than they used to, they’re doing so in ugly fashion.

Gonzaga made Saint Mary’s look absolutely silly on Thursday, in a primetime game televised nationally on ESPN. Last year Gonzaga won by 30 points in Saint Mary’s building. The year before, at home, the Zags’ margin of victory was a whopping 48 points. Saint Mary’s made the NCAA Tournament that season, but Gonzaga tossed them aside like they were a junior varsity squad on that night.

That’s the level Gonzaga’s risen to over the past few years. Even the best programs in the WCC struggle to hang with the Zags. And with those best programs already dispatched this season, the only teams left are among the group that have lost 100 straight to the Zags. Which puts Gonzaga just two wins away from perfection.

Santa Clara and Loyola Marymount will have seven years of history against them when they visit Spokane this week. If they do as they almost always do against Gonzaga, the Zags will end the regular season with a sparkling 24-0 record and a 15-0 conference record.

UP NEXT
Gonzaga is set to entertain the Santa Clara Broncos at 4 p.m. on Thursday (CBS Sports Network) before wrapping up the regular season against the LMU Lions Saturday at 7 pm on an ESPN network to be determined.