With Bartfest, the new three-day music festival hitting this weekend, everything from the meticulously curated lineup to the ticket price is intentional.

"I'd say this is the festival for people who don't like the huge crowds and rowdy atmosphere other festivals offer," says Bartlett co-owner Karli Ingersoll, sitting in her establishment's café last week. "We're bringing in a lot of pop indie acts; the lineup is more focused than other festivals. It'll just be a different vibe."

She says Bartfest is more of a block party than a festival, as it's happening at the Bartlett and nYne, side by side. And even though there's been an onslaught of music festivals in Spokane, as well as the nation, as of late, she says the successful ones fill some sort of niche. That's what she and her business partner/husband Caleb Ingersoll have tried to achieve with Bartfest.

Over at nYne, owner Kitty Kane says she's thrilled to be a part of the event.

"I haven't seen it yet that people are over festivals," Kane says. "People continue to come out, and with Bartfest, you don't know until you try."

While the event is all-ages, nYne becomes 21 and over after 9 pm. There will be an entire music-free hour leading up to that, for easy transition. Yes, the $90 weekend pass ticket price may seem steep, but Ingersoll explains that the money essentially all goes to the bands.

"We want bands to want to stop in Spokane," Ingersoll explains.

And with that, she wants people who live here to come out and support. As for this weekend, Ingersoll doesn't know what to expect, but says there's been a positive response to the lineup.

"With this festival you can see nearly every band on the lineup because of how we spaced it out," she says. "Music festivals are about discovering new bands you may not have heard of. Bartfest will be perfect for that." ♦ 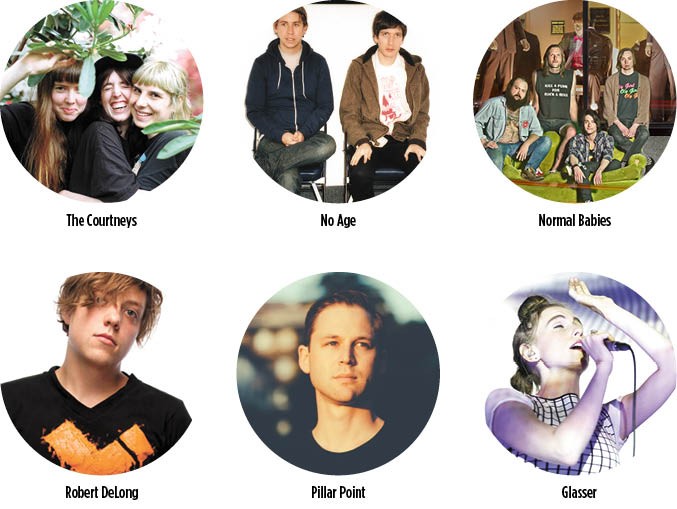 WHAT TO HEAR By Ben Salmon

The Bartfest lineup features a variety of regional and local indie acts. Here are the ones to which you should especially pay attention. See the full lineup at bartfest.com.

The leap from The Courtneys' self-titled 2013 album to this year's "Lost Boys" single is stunning. Gone are the thin guitars and unsteady melodies, replaced with a confident, catchy one-chord swagger befitting the band's Flying Nun/'90s indie-rock influences.

After two albums of some of the sharpest, snappiest pop rock around, Michael Lerner loosened his grip on Telekinesis slightly for 2013's Dormarion, incorporating more synths and moods. The result: Hooks that not only burst, but bloom.

Randy Randall and Dean Spunt long ago established No Age as a paragon of serrated art-punk, which is why their fourth album, An Object — more conventional, subdued — is confounding. Still ... I trust them, and I'll follow.

Normal Babies, 3 pm at the Bartlett

Great guitar tone is like pornography: You know it when you experience it. Even through their lo-fi recordings, you can hear that the 2014 Inlander Band to Watch Normal Babies know how to squeeze perfectly scruffy slack-rock sound out of their six-strings.

Young Magic's debut album Melt was one of 2012's more intriguing releases, a beat-driven blend of dream-pop, electro-thump and global sounds. This year's Breathing Statues follows suit but doubles down on the dreaminess.

Robert DeLong makes electronic music, but not the kind that has taken over the world in recent years. Instead, he incorporates his interest in singing, drums and indie rock and turns out something oddly danceable and a bit melancholy.

In 2009, Seattle's Shelby Earl quit a corporate job to pursue music full time. Her cubicle's loss is our gain, as Earl's two albums reveal a skilled baroque-pop songwriter with a massive voice and an old soul.

Throw Me The Statue's 2007 album Moonbeams is a modern classic of hand-clappy, heart-on-sleeve indie-pop. Now, the band's main man Scott Reitherman is crafting earworms out of synths and sadness with new project Pillar Point. Don't worry: The hooks still hit you at every turn.

Few musicians have chosen a performance name as apt as Cameron Mesirow, whose work as Glasser is smooth and seamless, a shimmering mix of soulful pop and ethereal electronica. This is music for an otherworldly afterparty. ♦