The Olympic flame is lit in Pyeongchang, South Korea, for the 2018 Winter Olympics (who knew curling could be so exciting?!). Black Panther has moviegoers exclaiming "Wakanda forever!" Prince Harry and Meghan Markle tie the knot in a Royal Wedding for the modern age. The March for Our Lives ignites a national conversation on gun control after a high school shooting in Parkland, Florida. The world watches as a Thai soccer team survives a daring cave rescue and President Donald Trump and Kim Jong-Un meet at the North Korea-United States Summit.

We proposed 47 good, bad and ugly ideas to reduce gun violence and save lives in the April 11 issue. Suggestions ranged from "good" proposals that were likely to reduce gun violence, such as plugging holes in the background check system, to "ugly" proposals that were likely to result in more injuries or death, such as arming teachers. Each proposal weighed the analysis and results of expert research to provide some guidance on a growing issue in the U.S. 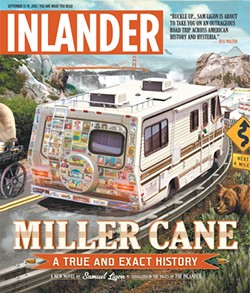 Back in the day, newspapers not only reported the news, but also provided a bit of entertainment. Serialized novels made a comeback in the pages of the Inlander with Samuel Ligon's new novel Miller Cane: A True and Exact History. Each week into next year, anxious readers can learn what happens next to Ligon's fraudulent historian protagonist, Miller Cane. See page 46 for this week's installment.

A short history of Fights and Riots in the Inland Northwest told stories of when WSU tried to ban on-campus drinking and reporters socking politicians. We learned all about adorable, nature-loving cats, police dogs and confessions from a professional dog sitter in THE PET ISSUE. And a round-up of favorite beef, vegan and vegetarian patties made a debut in the first ever Burger Issue.

We chatted with Saturday Night Live alum Julia Sweeney and how her post-Pat career is getting a reboot. Ten friends from Gonzaga Prep told us an oral history of the story of a lifelong game of tag immortalized on the big screen in Tag: The Movie. We also told the heart-wrenching story of Randy Mora, a Spokane man newly released from prison who died within his first week of freedom.

The original print version of this article was headlined "THE YEAR THAT Is... 2018"