Three years after Spokane's public records scandal, is the city any faster with records requests?

The documents were right there. All political activist Michael Cathcart had to do was convince the city to release them before the election. He was leading the effort to convince voters to recommend the site near downtown for a new high school sports stadium.

He knew a lot of voters were worried about where they'd be able to park, but he also knew the city had documents showing that neighboring properties had agreed to make parking available to stadium visitors.

But instead of giving him the documents outright, the city told him to submit a public records request. He filed it two weeks before the election. The election came and went. The stadium proposal Cathcart favored was overwhelmingly defeated.

"I got a response saying that it's going to take until Dec. 3," Cathcart says. "That's just absurd."

And then, on Dec. 3, he got the sort of message he'd been trained to expect: Due to staffing shortages, a mid-November medical absence other workload issues, he wouldn't get the documents until Jan. 7. Unless there was another delay.

It's not the first time, of course, that relevant public records have been delayed until after an election: A sprawling Spokesman-Review records request made in August of 2015 sought documents related to then-Spokane Police Chief Frank Straub.

It took 96 days — after Straub's firing and after the Mayor David Condon's re-election — for the most explosive documents to be released: City Administrator Theresa Sanders's text messages and handwritten notes revealed that a former police spokeswoman had leveled sexual harassment allegations against Straub. It sparked an independent investigation, a recall attempt against the mayor and a public records lawsuit: The city settled that lawsuit for $50,000 and a promise from the mayor to do better.

But in the past three years, there's little evidence that records-request delays have been significantly reduced; in fact, there's a lot pointing to the opposite conclusion. The city clerk's office has remained understaffed and overburdened.

"They got hammered with a series of unfortunate events," says Tony Dinaro, who worked as a temporary employee in the clerk's office this year before taking a job with Spokane County. "The clerk's office really did run into a unique set of circumstances staffing-wise. It was hard to make people believe things were really that bad."

Frustrating examples from the last two years abound: It took 77 days from when the Inlander requested a single email sent to City Council President Ben Stuckart — warning him about the domestic violence allegations against community leader Phil Tyler — to when the email was finally provided.

Earlier, when the Inlander tried to find out why the city's Streets Director Mark Serbousek was forced to resign in February of 2017, it took 486 days — 16 months — to get a hundred text messages from Sanders's cell phone.

Condon acknowledges that the efficiency of a city clerk's office can be a tough thing to measure.

The city clerk's office receives over a thousand records requests every year, including requests from journalists, attorneys, developers average citizens. And that's not even counting the thousands more sent to the police department's records office. A records request can be for something as simple as a copy of a city ordinance. Or it can be as messy as a request for, say, all the mayor's emails.

Yet, until recently, the city's software didn't even track the start and end dates of its records requests. That changed when a new state law in 2017 required local governments to regularly report a whole host of statistics related to their records-request performance.

But still, according to the city's own performance measures, at the end of 2017, the clerk's office was receiving fewer requests, but missing its self-imposed deadlines more often than it was at the end of 2015.

More than 1,300 records requests came into the city of Spokane's clerk's office in 2017. At least 250 of those requests took longer than three months to complete. And delays can breed suspicion: Brian Breen, the cantankerous former cop who settled with the city over the Straub public records delays, still believes favoritism is at play.

"It entirely depends upon how much embarrassment the document or documents might cause someone," Breen says in an email. "Those that don't, I get quickly. Those that do, come at a snail's pace."

A city clerk, Dinaro says, has to be a legal expert, a technology guru an inter-departmental ambassador. So it's not like the city clerks aren't working hard: While City Clerk Terri Pfister and Deputy City Clerk Laurie Farnsworth declined to speak to the Inlander for this story, Inlander reporters regularly get emails from them after-hours on Friday evenings concerning records requests. They're not getting paid overtime. They're just trying to put a dent in the massive backlog. 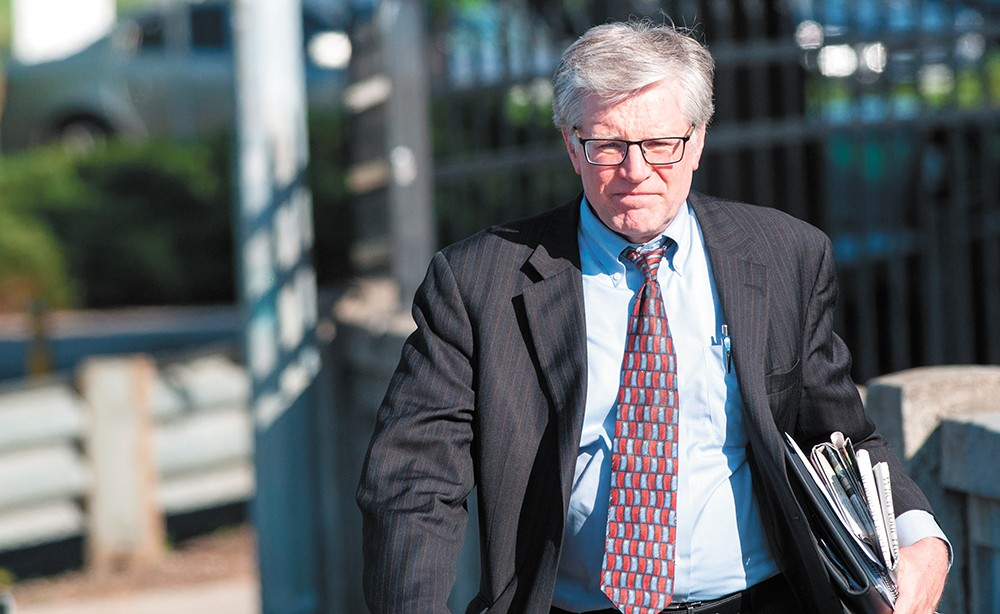 Daniel Walters photo
City Attorney Mike Ormsby says that technology had dramatically increased the number of public records — and has made for some complicated legal decisions.

"They stay late pretty much every night working on requests," Dinaro says.

If anything, Dinaro says, Pfister and Farnsworth are diligent to a fault.

"Terri and Lori are incredibly detail oriented and stringent," Dinaro says. "There are people who might be quicker and they might miss something."

Two years ago, Condon suggested that the department was underfunded.

"I have committed in my recent budget to increase the amount allocated for addressing public records requests," he said.

But while the City Council allocated an additional $100,000 for the city clerk's office in the 2017 budget, little of that was actually spent: Nobody new was hired that year. Instead, the clerk's office focused on re-examining its procedures and transitioning to a new records-tracking software system called "GovQA."

"We need to understand the issue we're trying to fix," Condon says. "The thought was, 'We don't want to grow until we look at some of the software.'"

The idea, , was to make the clerk's office more efficient: But the switch not only delayed calling in reinforcements, it initially added to the office's workload.

It wasn't until March of 2018 that Dinaro was hired — and then only as a temporary employee to transition to the GovQA system. The extra staffing was short-lived. One longtime clerk left the city in the summer, and another in October. And Dinaro himself left in mid-November, unwilling to pass up the security of a full-time permanent job with the county.

And because each new hire has to wind its way through the civil service process first, it took nearly half a year to fill just one vacancy. But that new clerk immediately left for another position in the city.

Three years ago, however, it wasn't the city clerk's office that delayed the release of the pivotal Frank Straub records: It was the city attorney's office, the agency that decides which records legally need to be released.

When Washington state's Public Records Act was first passed in 1972, there were 10 exemptions — 10 types of government records that didn't have to be turned over. Today, there are around 500.

But Pat Dalton, the assistant city attorney in charge of public records, says those exemptions have made it harder for the city to handle tricky records requests.

"Every new exemption just slows us down," Dalton says. "You have to look for one more thing."

"Those kids have a right to privacy by statute," says City Attorney Michael Ormsby. "If one kid wears orange tennis shoes all the time, you not only have to blur his or her face, you have to blur his feet."

Neither Condon nor City Council President Ben Stuckart are satisfied with the state of the public records process.

"I still have concerns about staffing levels," Stuckart said several months ago, "They're feeling the pressure at this very moment."

Indeed, the city is turning the temp position that Dinaro held into the first full-time position added to the city clerk's office since 2014.

And while there have been glitches and hiccups, the new GovQA software has made it easier to send and preserve records electronically. The system even guesses at the type of records you're requesting: If you're an architecture student requesting a building permit, for example, it automatically alerts you that you can do the search immediately on the city's permitting site.

"We're trying to get more stuff digitized so that it's searchable," Condon says. Everyone always requests records about staff salaries, he says, so why not just allow people to look that up online?

But in one major way, the city's gone backward on that goal: Spokane used to publish all of its internal affairs investigations into police officers on its website — easy for anyone to look up — but they took them all down in 2016, arguing that they revealed too much information and were bad for morale. Now, whenever a citizen wants to get an internal affairs investigation, they have to make a records request, adding to the deluge.

The city has also avoided one reform that has been successful elsewhere: Washington Coalition of Open Government President Toby Nixon, a Kirkland city councilman, says Kirkland splits the public-records requests five categories according to how complicated they are, "so that the easy ones are not clogged up behind the big ones."

But the city of Spokane hasn't done that in any formalized way. Condon and Dalton both say it's unclear whether that's even legal.

"The statute says you're not allowed to treat different requesters differently," Dalton says. "There's a really good argument that that means you can't take someone and move them to the front of the line, just because it's easier."

Yet sometimes all it takes is a phone call to turn a nightmare request into something more manageable. Dinaro recalls a request that initially asked for all city planning department emails that mentioned the word "Mike." The first search turned up 430,000 emails, the sort of request that could take two years to go through. Dinaro called the requester, and he agreed to narrow his terms, saving everyone countless hours of work.

But Dinaro says that sometimes city clerks could be gun-shy about making these kinds of calls. They've lived through big scandals and multi-year lawsuits. They don't want to say the wrong thing to a litigious person.

"It's a balancing act. You want to be there to serve people. You don't want some people to clog up the system," Dinaro says. "It's a vital part of our democracy and it's very important to take it seriously." ♦