Get Lit! 2017: Spokane poet Nance Van Winckel dives within to channel the voices of the subconscious 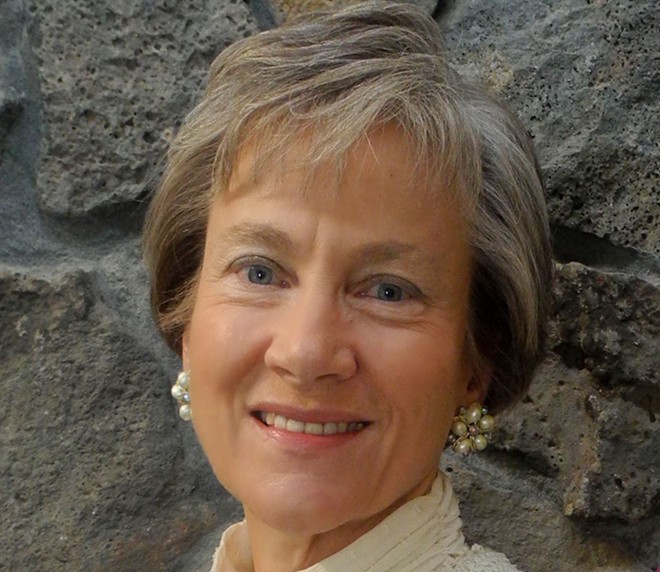 Rainer Maria Rilke, in Letters to a Young Poet,

lamented that "the experiences that are called 'visions,' the whole so-called 'spirit-world,' death, all those things that are so closely akin to us, have by daily parrying been so crowded out of life that the senses with which we could have grasped them are atrophied." That was written more than a century ago. Who has time (or want) for the unseen today when there remains so much paper unpushed, so much breaking news left unbroken?

"I feel like that's one of the poet's jobs, to talk back to that, to question that," says local poet Nance Van Winckel, who at this year's Get Lit! Festival will share the stage with authors Christopher Howell and Albert Goldbarth. "Poetry allows people to validate their imaginative lives, because they enter someone else's. It makes you realize, 'Oh, there are other consciousnesses all around me.'"

Her own path as a wordsmith was born out of a failed pursuit of six-string stardom in high school. "I was playing the guitar and I was trying to write song lyrics. They were very sad and depressing," she says, laughing. "I could not sing at all." But Van Winckel then discovered her muse in the poetry of Anne Sexton, Sylvia Plath, John Berryman and Lawrence Ferlinghetti. She abandoned the notion of attending medical school and dove headlong into her craft, arriving in Spokane in 1990 to edit Eastern Washington University's literary journal Willow Springs.

Van Winckel sees her work as "a marriage between the narrative impulse, the impulse to tell a story, and the impulse to leap out of that sequential construction that stories put you in." It's about "going inward" and "getting unhinged from linear time," she says. "I'm interested in, as much as possible, seeing if I can have it both ways."

Her latest book, Our Foreigner, released in January on the heels of October's Book of No Ledge (a collection of visual poems in the form of an "altered encyclopedia"), is a transfixing inquiry into the boundless world of the psyche, what she calls "the land of the subconscious." It draws from dreams and vestiges of past lives in search, she says, of that aforementioned timelessness. Even the title is the reincarnation of a poem from her previous book, Pacific Walkers, called "Who Died and Made You Our Foreigner?" that Van Winckel considers a thread between the two books; it's this "idea of ongoingness" that she admits is at the heart of these stories. "I find that very interesting, that we keep going around and going around until we get it right, what we contribute here."

And yet somewhere, somehow, we got it all wrong.

"We're foreign to ourselves. The Self is being made unfamiliar again," she says. Her concise but kaleidoscopic poems take a candle to that darkness obscuring the soul, and with poignant precision they seem to reveal, at its center, Rilke's unassailable truth: that we've willfully buried our true mystical being under a mountain of meaninglessness. "I told him I was pleading / ignorance," she writes in the poem "Stateside, 1972." "There wasn't anything / I knew anymore about the past." Our Foreigner follows its characters westward out of history and onto this blank page of Manifest Destiny as they seek contact with "the vast maybe" from the opening poem that lurks on the edges of the imagination.

"How, really, was the 'west won'?" asks Van Winckel. "The stories we tell are such bull crap, but they're ours." Our myths, our illusions. "We're all just so entitled, or so we believe, to the journey, to the messages," she argues. Perhaps because, in the end, that's all we're left with. "There is only me, and I am no one," writes Van Winckel cryptically. "I am just the messenger." ♦