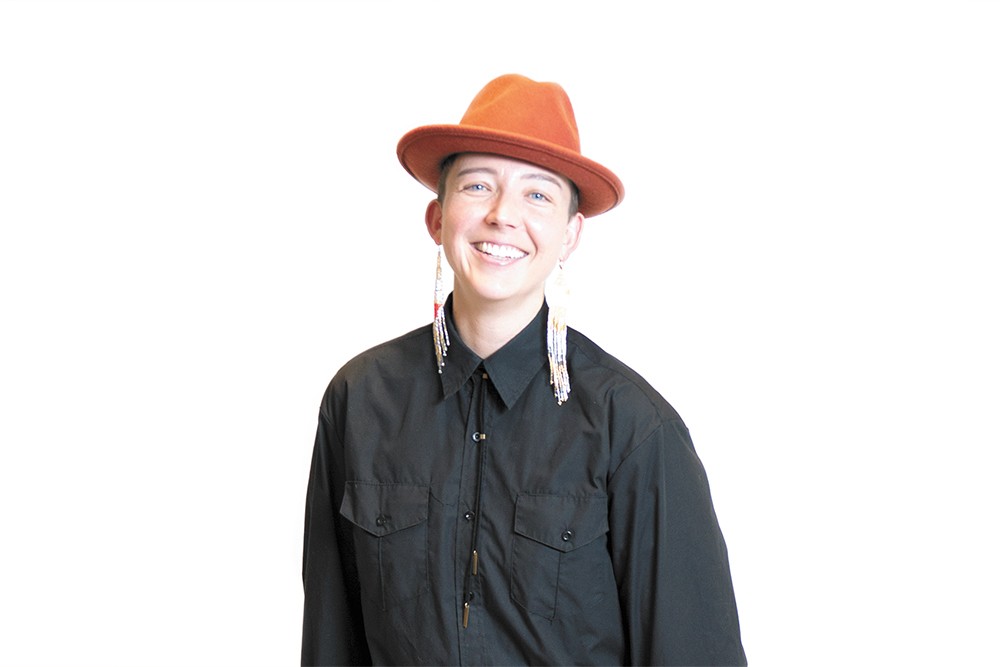 It's been 12 years since Terrain made its first mark on Spokane. It's grown from a one-night party featuring 30 artists to a year-round cultural organization with its main event attracting more than 8,000 attendees.

With Terrain 12 coming up Oct. 3 and 4, we sat down with Roin Morigeau, a local artist who credits the event with helping them launch their art career. Morigeau, who prefers the gender-neutral pronoun "they," moved back to the area in 2017 and had recently picked up visual art as a creative outlet. Since then, they've had several shows throughout the region, collaborated with local artists like Karen Mobley and joined the The PORTAL Collective at Saranac Art Projects. Now Morigeau is getting ready to open their own creative space — YES IS A FEELING — coincidentally in the former home of Terrain's Pop Up Shop.

We talked to Morigeau about their experience with Terrain and their trajectory through the Spokane art scene. This interview has been edited for length and clarity.

INLANDER: What's your background in art and how did that lead you to becoming a working visual artist?

MORIGEAU: I had my first show in September 2016. So not that long ago. I'd been a musician and a singer my whole life. And I actually came to art through the trades. I was a full-time fabricator in New York, and I had a spinal injury on the job. I lost my ability to lift more than 2 pounds. I went from being able to work with wood, glass, metal, to only picking up a pen and paper. I still just really had a desire to make. I started to draw and paint. I got connected with Terrain and it was such an amazing organization for exactly what I needed, which is giving upcoming artists the tools they need to emerge.

It sounds like Terrain was a big part of you getting into the art scene here. What was your first experience with Terrain?

I was suggested to get in touch with Terrain. I didn't know what it was. Having just moved back, I'd never been to a Terrain event. So I went online, and I saw that they had a call-out. I applied and I got in. Then the next email that I got was about booths. What I had actually gotten into was Bazaar. OK. I hand drew 150 pieces of art and it was wildly successful. It shocked me. People came with cash. They came to buy art and it was really a beautiful thing to see. Just to see Spokane value art because I didn't even know you could be a working artist growing up here. After that, I got some pieces in Terrain 10, and then I got into their Creative Enterprise program. Since 2017, I've been in all the Bazaars and all the Terrains. It's been a really amazing experience.

Looking back, how did that first Terrain help you grow as an artist?

I'm trying to figure out how it happened, but I got cold called after Terrain by Karen Mobley. She saw my work, I'm assuming at Terrain, and she called me up and said, "I'm writing a proposal for the Terrain gallery for a group show and I want to include you." Everyone in that show, John DeRoulet, Karen Mobley, Ellen Picken and Mariah Boyle, had been in the game. I was really the least experienced. I was just through the moon — that show was an amazing experience. I totally blame Terrain for that.

You've been a part of the event since 2017, and you're doing it again this year. What's the value as an artist to continue to do Terrain even after turning art into a career?

I say, "Why not Terrain?" I submit every year, even if there's no guarantee of any piece getting in. I submit because it's a community and an organization that has given me so much. I love that a percentage of my work goes back to Terrain because as a working artist, I can't donate with my dollars, but I can donate with a percentage of my work.That makes me happy. And you just never know who's gonna see your work.

And now you're opening your own gallery. Can you tell us a little bit about YES IS A FEELING?

It was schemed up by Cody Schroeder and I. It's the former Pop Up [Shop] space in the Steam Plant. It's such a beautiful, beautiful space. All I want to do is make work in that space. Cody and I will be making work and showing work. We will host performances, we can host poetry nights, we can host panel discussions. Cody is going to be doing photography workshops. I just really want to help support Spokane artists. I'm really excited about creating a new institution. As a queer artist and a queer curator, I'm also excited to bring in my community — my communities from New York, my communities from Seattle, Los Angeles — and creating an opportunity for Spokane to see some of the artists that I'm inspired by personally. ♦

YES IS A FEELING, Grand Opening

Derek Harrison is the Inlander creative director and Drink Local editor. He has received national recognition for his editorial layout. A graduate from Washington State University, he joined the Inlander in 2016 with a background in editorial design and photojournalism.
Read More about Derek Harrison