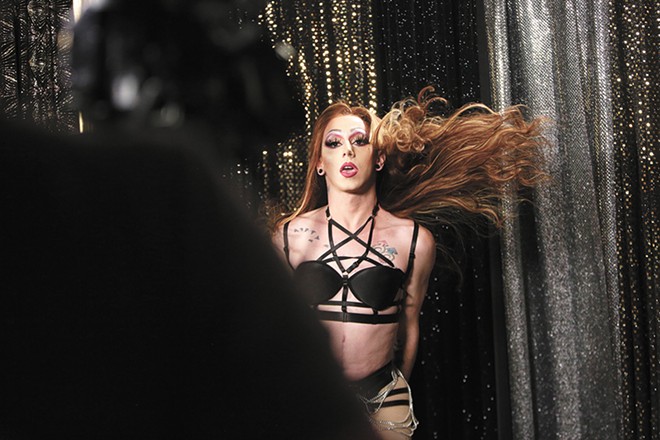 It's a question that has plagued every local arts scene since COVID-19 lockdowns took effect: How do performers who rely on audiences eke out a living during a pandemic that has prevented us from packing ourselves into venues?

Live, in-person entertainment has been nonexistent in Spokane since March, and it will remain that way until the city has entered Phase 4 of its reopening plans. In the meantime, though, artists have kept their audiences (and paychecks) through increasingly advanced forms of technology, mainly via social media and livestreams.

One of the few places in town that has found a workaround to the cancellation of live entertainment is the Globe Bar & Kitchen, and they've done it with the sort of setup you'd find in an average television studio.

The LGBTQ+ hangout, known for its weekly drag shows, has remained open through the lockdowns — save for a few weeks back in March when it was temporarily closed — serving dine-in customers at a limited capacity. (Its neighboring bar, the Blind Buck, has yet to reopen.) When it became clear that live performances weren't going to be happening any time soon, the Globe started hosting virtual drag shows on Facebook, which featured a string of prerecorded segments that had been edited together.

But Globe owner Scott Wilburn says he wanted a more spontaneous feel, something that accurately captured the energy of being in the bar and watching a performance in real time.

So he put his background in broadcasting to work and set up a makeshift, in-house studio that allowed performers to strut their stuff for an audience and stay at a safe distance. When you go to a show at the Globe, you'll essentially be watching a live simulcast: The performers are right below you in the basement — or in "the bunker," as they prefer it to be called — with multiple cameras trained on them in front of either a glittery curtain or a green screen.

That feed is then broadcast upstairs to the bar's TV screens, and it also goes out online via Facebook Live. There are also cameras and mics in the upstairs dining room, so that performers can hear the audience responding to their acts. The performers go one at a time, and the downstairs crew are all masked up.

Because drag queens rely on tips, their Venmo information is on the screen along with them, and the Globe staff also sends around the type of collection basket that you might see at Sunday church service, except this one is on the end of a 6-foot-long pole.

"I even had to order it from a Catholic supply house," Wilburn says. "I didn't tell them what it was for."

"Much of our community is built around performance and events, and so many of our patrons are performers, whether it's drag or on our karaoke nights," says Jeremy Urann, who works the front of the house at the Globe. "A lot of our business and our events revolve around the entertainment aspect."

The Globe is now operating at just 75 seats, which is less than half of its normal capacity. They're hosting drag shows on Saturday nights and virtual bingo on Mondays, and they'll soon be pivoting into live music and stand-up comedy in coming weeks with the same format they've established. It's important for Wilburn to keep his regular entertainers working, and to keep everyone safe.

"The entertainers would hang up their outfits and try to figure out something else to do otherwise," Wilburn says. "Why not give them a safe place to perform, in front of a camera rather than in front of an audience where their health could be at risk? They can still practice their craft, they can keep current, and they feel better about it. It gives them a sense of normalcy."

"Especially as we've embraced our LGBTQ identity, it's important that we have a safe, positive community space, for our customers, our staff and our entertainers," Urann says. "It's giving them a place where they can still share their art form and be celebrated safely."

Although it's a world away from drag queens and the nightlife scene, the local music collective Imagine Jazz was in a similar predicament as the Globe.

Right before the pandemic shut everything down, the group had struck an arrangement to host regular concerts at the for-rent event space the Monroe Room. In-person gigs were put on hold shortly thereafter, and so — in true jazz form — they improvised a new plan in the form of weekly online streaming concerts. Most of those shows have been beamed directly from the Monroe Room, and future concerts will be broadcast from the Holy Names Music Center.

The concerts rely on a simple setup — it's a couple cameras trained on the performers, with a studio-ready audio setup that is then fed directly onto Facebook — but it has required some fine-tuning to make sure the sound is at its best. The concerts have expanded beyond jazz with some intimate singer-songwriter performances, and certain broadcasts have netted up to 1,000 viewers. Some viewers are watching live in real time; others are watching after the fact on Facebook or YouTube.

"The people who are watching seem to be really happy to see it happening," says Imagine Jazz founder and artistic director Rachel Bade-McMurphy. "So many people have really just been bummed out not to be able to see any concerts."

That goes doubly for the musicians: "In some cases, it's been the first time that anyone has played with another person since March," Bade-McMurphy says. "It's a little bit different [from a live show] because they can't see the responses from people, and they're so used to being able to feed off of the energy."

Bade-McMurphy says Imagine Jazz is considering the possibility of continuing the livestreams even after in-person concerts resume, whether that means producing exclusive streaming content or offering a discount ticket price to watch one of their regular concerts from your living room. Some of those updates are thanks to a recent Spokane Arts grant: A portion of those funds will go toward paying artists, and the rest will go toward improving that streaming setup, as well as virtual masterclass workshops and educational outreach.

But regardless of how much longer streaming concerts will be our reality, it's a relief for both audiences and performers to have some live music again, no matter how it has to be delivered.

"I think it just gives people hope, and something to look forward to," Bade-McMurphy says. "There's also the personal connection we're all kind of looking for, and music can just be so powerful that way." ♦

Visit globespokane.com and imaginejazz.org to keep up on live events.