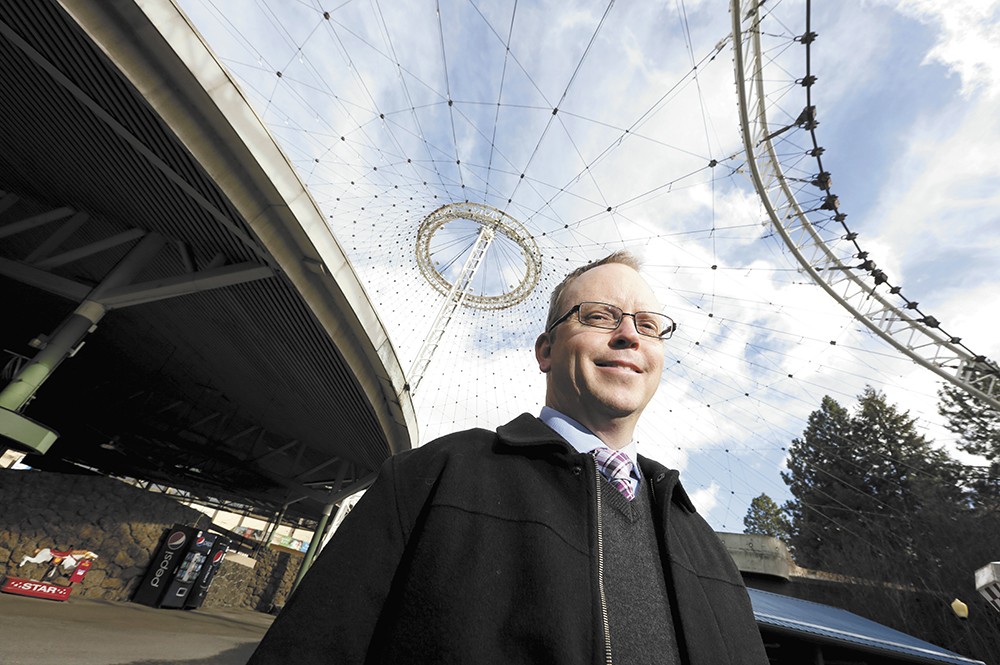 Young Kwak
Newly hired Riverfront Park Director Jon Moog wants you to know that, when construction finally begins at the park, the park will remain open.

Spring has finally arrived at Riverfront Park. It's still a bit chilly as newly hired Riverfront Park Director Jon Moog walks through the city's downtown park on a March morning, but the sun is shining down on the clock tower, the garbage-eating goat sculpture, and the lilac-colored gondolas that cross over the sparkling Spokane River.

This is the year, Moog knows, that everything changes. In 2014, Spokane voters passed a $64.3 million bond to transform the park. It will mean a new ice rink, playground and central plaza. A few of Spokane's most iconic landmarks — including the pavilion and the Looff Carrousel — will get a serious upgrade.

In his first few weeks on the job, Moog has had to start planning how to keep the park humming as parts of construction start this summer.

In the meantime, the city's parks department and the Park Board face a different sort of challenge: assure an impatient public that the project is on track. Former Board President Randy Cameron, the chief operating officer of Baker Construction & Development, says he's heard growing concern from his peers in the construction and architectural industries. They're worried about higher-than-anticipated costs. They're worried about the number of consultants who have been hired — 20 so far. They're worried about apparent construction delays. There's excitement, yes, but also uncertainty over all the unanswered questions.

"There's a void there," Cameron says. "Hopefully, [the parks department] can close that gap, and that void, quickly."

Last month, Leroy Eadie, director of the city's parks department, stood up at an open forum and assured the public that everything was proceeding as planned in the Riverfront Park project.

"How are we doing on budget and timeline? I imagine that might be a question you'd ask," Eadie said. "We're on budget. And we're on time."

The accuracy of that statement, however, depends on which timetable is being talked about: In June of 2014, when the Park Board approved putting the project up for a vote, the master plan outlined that construction would "ideally" conclude in the spring of 2018. By that October, the plan had been changed to list "Spring 2019" as the end date. Now, Park Board President Chris Wright says that "we want to be done by 2020."

One recent letter to the Spokesman-Review reacted to a story on the Riverfront Park bond budget by accusing the parks department of "doublespeak," "malpractice," "fraud" and "false representation."

Park Board members and department staff say this sort of rhetoric is wildly overblown. They assure anyone who is worried that, no, they won't have to scrimp on elements of the Riverfront Park update, and no, extra taxes won't have to be raised to pay for it.

"There's a lot of hyperventilating going on," board member Andy Dunau said at a meeting in March, addressing concerns they'd heard in the community. "But you know, it's really easy for people to take shots at this. ... I'm just going to ask people to be patient, and trust that people have worked really hard to make it happen."

Yes, construction on the park's Howard Street pedestrian bridge to the south was originally slated to start last November, and be completed before Hoopfest this year. But Dunau dismisses the fact that it's been delayed a year "as the biggest 'big whoop' you could imagine."

It wasn't just the bridge construction that's been pushed back, however. An application that the parks department submitted to the state last May included a schedule for Riverfront Park construction: By now, the timetable indicated, demolition of the IMAX Theatre and the Gondola Meadow should have been underway. It hasn't started. The formal design phase for the Pavilion should have begun. That hasn't happened either.

The schedule showed that the parks department had aimed to have the ice rink completed by this coming October. It won't be completed until next year.

Delays have real costs for the project, Cameron says. As the economy slowly recovers, he's seen that construction costs — labor, concrete, steel — have been skyrocketing.

Eadie, however, doesn't consider the changes in the plan for Riverfront Park "delays" so much as an "evolution." As design, engineering and environmental firms have been hired, he says, a more realistic understanding of the timeline has come into focus.

"It's like you own a piece of property and you want to build a house on it," Eadie says. "And you tell your family on Thanksgiving, my house is going to be done in six months, but you haven't even hired your designer yet." Once you hire your architect, he says, your plans may change.

A groundbreaking, Eadie says, is tentatively set for July. While the budget over the next two years includes plenty of detail, he says, the Park Board has not voted on a formal schedule for the entire project. Cameron suggests that's a mistake — that the public is craving clear updates and specific plans.

"There needs to be a new schedule, and that needs to be firm and announced, so all the citizens can follow," Cameron says.

Stantec Design
The decision to change the ice rink design from a "rink" to a "ribbon" resulted in this cool design here — but added $900,000 to the project.

More than a year after the bond passed, important questions remain unanswered: What will the regional playground look like? Where will the central plaza go? Will the new pavilion look anything like the concept art the public saw before voting? Will there even be a skatepark?

Wright says it makes sense to take the time necessary to answer crucial questions. "I don't feel taking the time for a thoughtful design process is a bad idea," he says. "I'd rather get it right than start it too fast."

But Cameron is concerned that big problems could lurk in the unknown.

"We've got unknowns," Cameron says. What happens, he wonders, if contaminated soil is discovered late in the process, driving up the costs? Would it mean that exciting plans would have to be scaled back?

"That would be crushing," he says.

Already, the project has suffered a few nasty surprises. Nearly three years ago, city engineering staff worried that no one had taken a close look at the condition of the park's bridges for 40 years.

"Engineering highly suggested we hire consultants, and have a thorough inspection done in the next year or so, ideally before the Master Plan," minutes from a May 2013 board meeting say. It took another year for the consultant to be hired. Five months after the 2014 bond passed, the consultant's estimate for the cost of bridge repair and replacement finally arrived. Cue the sticker shock: The repairs would cost $13.5 million, more than six times the estimate that had been put before the voters.

Part of that cost will be paid for out of the utilities budget, not the park bond. But other price tags, for services like landscaping and consulting costs, also have increased. The parks department spent more than $21,000 on a consultant to prepare an application asking the state to approve an alternative project-management structure. But that application was rejected.

The board's decision to go with a fancier "ribbon" design made the ice-rink project 40 percent more expensive, adding $900,000 onto the bill.

Eadie says that, so far, the increased costs haven't cut into the budgets of other projects or the bond's contingency fund — they've been paid for through the bond's interest and a reduced administrative budget. But he recognizes that, as a result, the room for error on the project has grown more narrow. It's a complicated project, and last year, the state rejected the proposal to hire a single contractor to manage the whole project. The parks department now has to take on those administrative risks itself.

The department has hired a new communication manager and tasked a local advertising firm to help with marketing. But ultimately, Wright suggests that the best way to assure observers fretting about the lack of visible progress might be, well, visible progress.

"By August, the comments are going to be not that we're moving too slowly, but 'Oh, my God,'" in reaction to developments at the park, Wright says. ♦