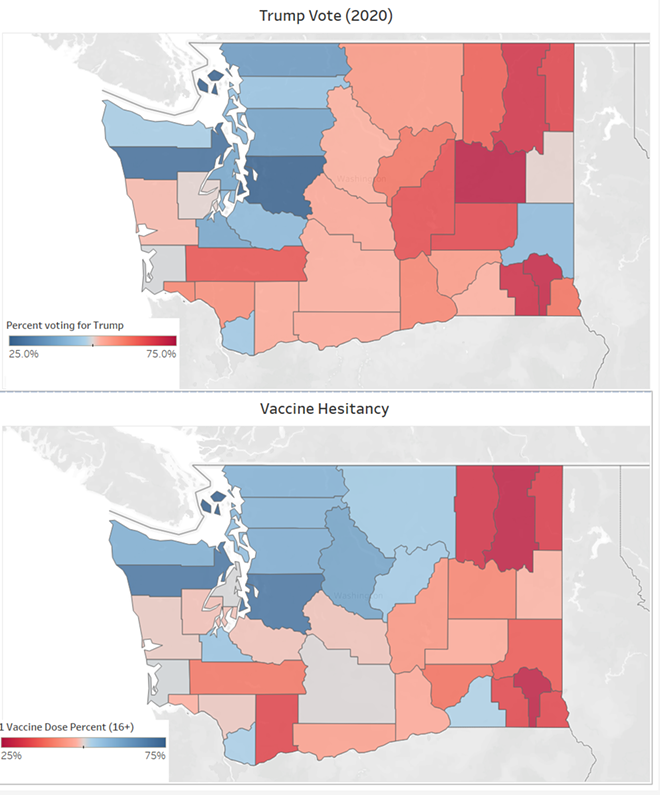 But when you chart out all the most vaccinated and least vaccinated counties in Washington state, and compare it with how heavily counties voted for Trump you get something like this:

The conclusion is obvious: The redder a Washington state county is right now, the less likely its residents are to be vaccinated.

Maybe there's another underlying factor that fits far better. So we built a little data tool we're calling the "WA Vaccination Correlation Demonstration" to test that out. (Vaccine and COVID data is current as of May 19.)

Click here to view it. At the top, you'll be able to select from a slew of different variables to see if anything does a better job at predicting which counties have lower or higher vaccination rates than whether they voted for Trump.

Maybe a community that's suffered a higher COVID death rate has sought out more vaccines as a result?
click to enlarge

Nope. There's a very weak correlation suggesting counties with higher COVID death rates are less likely to get vaccinated, and no significant correlation at all when it comes to overall COVID cases.


How about race? A lot of talk about vaccine hesitancy early on was focused on worries that Black, Hispanic and Native people would be less likely to take the vaccines. Also, COVID cases hit heavily Hispanic counties like Yakima a lot harder than places like Spokane. 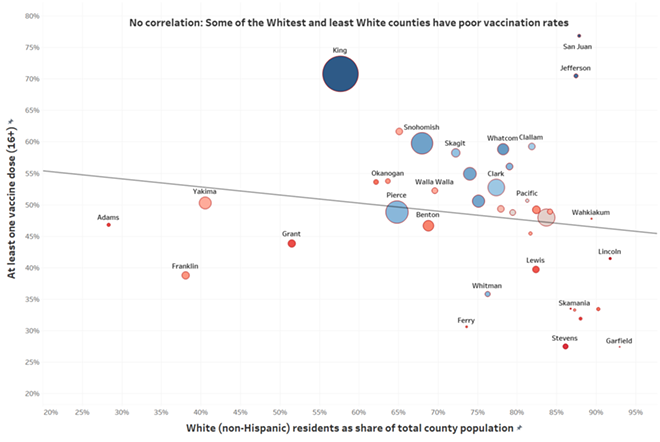 Daniel Walters data visualization
(Click to enlarge)
But, at least at the county level, there's no clear difference between predominantly White counties and counties with lower numbers of White people. (In fact, counties with higher Asian and Black populations, like King County, were slightly more likely to be vaccinated overall.)

What about how rural a community is? More populated and more dense counties are both more likely to be vaccinated, but not by a ton.

How about the average age in a county, considering old people might be more likely to be worried about COVID than young ones? Nope, no connection.

Income? There's no clear connection between a county's vaccination rate and its unemployment rate, though there is a relationship to a county's median household income.

Education? Counties with more bachelor's degrees are more likely to be vaccinated, but it's still not as closely correlated as whether a county voted for Trump.

But what if you had some measure that spoke to wealth, density and education? Like, say, how many households were without an internet connection?

Now we're getting somewhere, but the relationship still isn't as clear as a county's 2020 ballot tally. 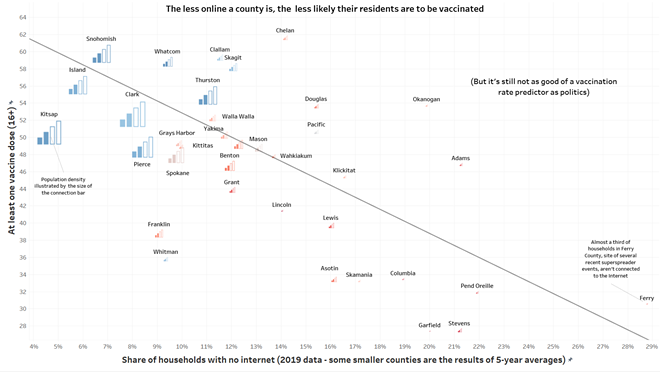 We tried just that, examining the level of kindergartners who had all their vaccinations in the 2017-2018 school year and comparing it with the current COVID vaccination rate... 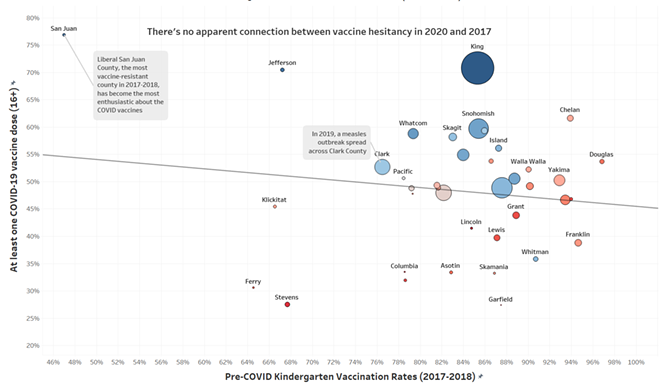 Daniel Walters data visualization
(Click to enlarge)
...and there's no connection at all.

In fact, liberal San Juan County, which had the worst kindergartner vaccination rate in the 2017-2018 school year, has been the best county in getting their COVID vaccinations. None of the variables we tried did a better job of predicting a county's vaccination rate than who they voted for in 2020.

If you want to get statistical, you can mouse over the trend line to see two key stat numbers to beat. The Trump Vote/Vaccination Rate graph has a "P-value" of less than 0.0001, meaning there's very little chance that there's no correlation between how much the county voted for Trump and how little they're vaccinated. It also has an "R-squared" score of 65 percent, suggesting that about two-thirds of a county's vaccination rate can be predicted by Trump's 2020 margin.


"There are multiple factors that could be contributing to the differences we're seeing in vaccination rates from county to county," Washington state Department of Health spokesman Cory Portner says in a statement. "We can't say for sure that vaccine hesitancy is the cause of lower vaccination rates in certain counties, since some areas may have had less access or more barriers to vaccination. As we work to reach groups of people who are taking a bit more time to get vaccinated, we know a one-size-fits-all approach is not enough because people have different reasons for not yet getting their vaccine."