Samantha Wohlfeil photo
Norman Semanko, left, attorney for CANSS, speaks to dozens of people (not pictured) opposed to a proposed silicon smelter before a public comment session held by the Department of Ecology in late September.

Gathered outside a late September meeting at Newport High School, where the state Department of Ecology is waiting to hear what people think they should include in an environmental review for a proposed silicon smelter, dozens of people opposed to the project listen in as attorney Norm Semanko speaks.

“There’s three primary areas that we’re focused on legally with regard to the proposed smelter,” Semanko says, standing under a canopy with maybe 50 or more people standing around him. “The first one is the lawsuit we’ve already filed in Spokane County.”

In their fight against the $325 million silicon smelter planned to go in just south of Newport, Semanko is helping represent opposition group CANSS (Citizens Against Newport Silicon Smelter) in a lawsuit against Pend Oreille County, the county Public Utility District and the company behind the project, HiTest Sand Inc. The suit was filed with RG*NEW (Responsible Growth*Northeast Washington) which is being represented by Rick Eichstaedt and Gonzaga’s Environmental Law and Land Use Clinic.

One of their main issues? Land. It’s all about the land.

First, a parcel of public land was swapped from the county to the utility district, then the PUD sold that chunk and three other parcels it owned to HiTest.

That sale, the opponents argue, was not done under proper public process. 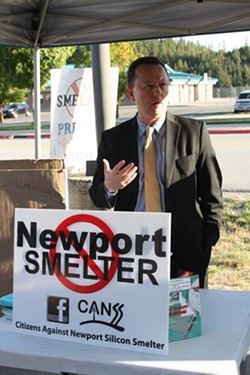 Samantha Wohlfeil photo
Attorney Norm Semanko speaks to concerns about a proposed silicon smelter in Pend Oreille County.
“The records speak for themselves,” Semanko says. “The things that led up to the sale of the property to HiTest, now PacWest, were orchestrated, behind the scenes, predetermined, in contravention of public process and law.”

The PUD and HiTest have said the land sale followed all proper processes.

Secondly, that land is all currently zoned public. Under Pend Oreille County rules, that means industrial uses wouldn’t be allowed there, even with a conditional use permit.

So now, rather than continuing to require each individual property owner who owns land designated public to apply for changes on a case-by-case basis, Semanko says, the county has proposed redesigning its code and changing the designation for all the public land in the county to allow for other uses on properties that have passed from public hands to private ones. It’s part of an update to the county's comprehensive plan.

That’s not sitting well with the people opposed to the project, particularly because one of the county’s commissioners, Steve Kiss, bought public land from the PUD around the same time as the HiTest deal. If he doesn’t recuse himself from making decisions on whether to rezone all public land, which he could personally benefit from, there could be serious violations of state law, the groups argue.

That’s why on Oct. 2, their attorneys sent a letter to the county demanding Kiss recuse himself from at least that part of the comprehensive plan amendment process. While the other two commissioners could still pass the rule changes on their own, as they constitute a majority between them, the groups still think it’s important for Kiss to step back from the process.

Kiss says he doesn’t have any problem recusing himself from that particular zoning change decision making, pending advice from the county’s attorney.

“Personally, I don’t care if my land gets changed or not. My piece of property I bought has no road access,” Kiss says by phone Friday, Oct. 19. “I bought it just for the timber, 'cause that’s what I [did] in my former life is harvest timber, and that timber harvest is not disallowed by the public lands designation.”

The only reason a rezone might impact him, Kiss says, is if down the road, he wanted to do something else with the property, which used to hold a house for a PUD employee to care for a wooden flume that directed water from the Mill Pond Dam to a power plant that was abandoned back in the '50s.

But for now, he’s got no plans for that. Kiss will already have to work out access with the National Forest Service as it is, even for timber harvesting.

He notes that the change is needed for anyone who bought public property and now wants to develop there, and there are other property owners affected aside from HiTest.

"I helped write the comprehensive plan as a member of the planning commission years ago," Kiss says. "We didn’t anticipate public land or land owned by public entities transferring into private ownership. ...  I guess that was a mistake on our part."

People have until Friday, Oct. 26, to submit comments to Ecology for the environmental impact statement the department will undertake on the proposed smelter.

The project, now under company name PacWest, owned by HiTest, would open a silicon smelter processing 170,000 tons of quartz rock each year with more than 100 megawatts of electricity to melt the rock and release the silicon metal. The metal would then be sold to other smelters that can continue the process of making it into products such as solar cells, computer parts, aluminum or other chemical compounds.

The Alberta-based company says the smelter would bring about 150 jobs to the area.

To smelt the metal, the process also requires wood chips and coal, which are used to interact with the high temperature process and mostly produce carbon dioxide as a byproduct. But other gases, such as carbon monoxide, sulphur dioxide and nitrogen oxide are other likely byproducts.

Those gases can contribute to acid rain, which is one concern for neighbors in the area, as well as traffic, whether by truck or train, to and from the site, which currently has no road access and sits on the Idaho border.

Ecology has held meetings in Spokane, Newport and Priest River, and is also taking comments online at this site.

Samantha Wohlfeil photo
Hundreds of people showed up to tell Ecology the most pressing issues they want studied during the environmental review process when the department held a meeting in Newport in late September.

Inside the Newport High School gym in late September, there were easily 400 or more people who showed up to comment, a significant showing for a county with only about 13,000 total people.

Virtually all who commented were opposed to the smelter, except for one or two people who spoke in favor of — or appeared sympathetic to — the project.

Curt Holmes, director of governmental affairs for the Kalispel Tribe of Indians spoke first, sharing that his 14-year-old daughter had started asking him that week about what the impacts might be. Would it do anything to her hair? Would people get cancer down the road? What about the fish — was anything going to end up in the water?

“It really impacted me, because as a father I’m supposed to protect my little girl. I left not being able to answer any of her questions definitively,” Holmes said. “I don’t have a whole lot of confidence in this scoping. It’s a project of tremendous impact and size, and yet PacWest hasn’t provided a whole lot of details on this project.”

Others asked what would be done to prevent emissions from hanging in the valley when there are already bad months for wildfire smoke and inversions that keep home heating smoke hanging low in winter.

The project outline says the smelter may emit up to 766,000 tons of greenhouse gases each year. It’s expected the facility would become one of the state’s largest greenhouse gas polluters, though HiTest says that should be weighed against the benefits from the eventual production of solar cells with the silicon metal produced.

Over multiple hours, the commenters peppered the representatives from Ecology with the questions.

“Impurities end up in the slag. Where will that slag end up?”

“What about the air quality? Our family has asthma.”

“What level of damage to the local community will be considered acceptable?”

After the comments are compiled, Ecology will start its study. A draft environmental impact statement is tentatively expected to come out in summer 2019, with public comments again accepted and meetings held through the fall. A final study could be released by winter 2019.