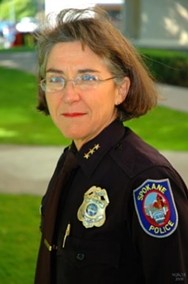 "Of the eight men up for the gig, nary a negative word is written. All you get are promotions and accolades," the blog wrote. "Contrast that with how The Times treats the three women in the running."

The Times mentioned the police guild's recent no-confidence vote in Kirkpatrick, and other criticisms against Des Moines Police Chief Judy Bradshaw and the former chief of police for Elgin, Ill., Lisa Womack.

The same level of criticism, the blog noted, was lacking for the male candidates.