THIS WEEKEND IN MUSIC: Pre-funk! Superhero dance off! 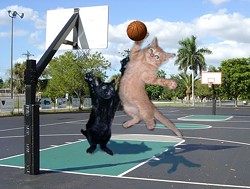 It's Hoopfest weekend! Whether you like it or not! Though I'm sure it brings in millions to the city (yay!), it notoriously slashes music offerings in the downtown core (boo!). So here's some stuff you can do this weekend that's NOT downtown ... plus some stuff that is.

I question their athletic prowess, but they're damn good musicians. Tonight at Coffee Social (113 W. Indiana) you can see Ian Miles and Inlander contributor Dustin Carroll play pretty, acoustic tunes in their band The City We Live In (Free, all-ages). And then on Sunday afternoon, you can see Miles and Carroll play in WILT at the Cretin Hop (all-ages, $5, 1 pm). It's a drone-y black metal group. Now if you're not impressed by sports or by folkie-metal double duty … well, you just can't be pleased I guess.

PRE-FUNCTION! The Inlander is throwing a big ol' pre-funk dance party tonight to kick off the Hoopfest festivities. There'll be food and drinks and photo booth photos and lots of fun-ness. Head on down to the Lincoln Center (1316 N. Lincoln) at 8 pm. Tickets: $10. 21 .

Away from the action (but still downtown), you can catch Mimicking Birds tonight at Empyrean. They're the pride of Isaac Brock's (Modest Mouse) Glacial Pace Records and made a big splash at the first ever Birds on a Wire festival this spring. They play tonight with Wolfgang, Enola Gay and Terrible Buttons at 7 pm. $8. All-ages.

It's just as much about the music as it is the bellies. If you've never seen Koreshakti Tribal Fusion, check them out this weekend with their original two-man backing band, Kama Shivaya. The two groups are throwing shows tonight and tomorrow night at the A Club — both to benefit the Physician's Committee for Responsible Medicine (which advocates alternatives to animal testing). Tonight is VERSUS, a superhero/supervillian tribal dance battle. And tomorrow is COLLIDE, a fusion dance performance with world band Pax Lumina. Each night is $10, and will be followed by MAYHEM — a goth/industrial dance night (which you can attend for just $2). VERSUS and COLLIDE begin at 8 pm.