Books to look for in November

.. ..  along with a few recent releases.
Becoming Jimi Hendrix, by Steven Roby and Brad Schreiber (Aug. 31, Da Capo Press)  Growing up in Seattle; a stint in the army; Greenwich Village (and the influence of Dylan); his gentle and violent sides; his death in London.
How To Live: Or a Life of Montaigne in One Question with Twenty Attempts at an Answer, by Sarah Bakewell (Other Press, 400 pages, Oct. 19)   Biographical passages interspersed among reflections about the philosophy of happiness — quirky and rambling, like Montaigne's own essays. Filled with digressions and wisdom.
The Fiery Trial: Abraham Lincoln and American Slavery, by Eric Foner  (Norton, Oct. 4)  He thought of blacks as racial inferiors who ought to segregated by being shipped to a colony in Africa. And yet ... Foner shows that Lincoln's evolving views on race paralleled the North's evolving view about race. In other words, Lincoln was no saint -- he advanced from racist to visionary thinking, all in the context of war.
The Last Days of Ptolemy Grey, by Walter Mosley (Riverhead, 290 pages, Nov. 11)  He's 91 and has dementia. Doctors offer him a cleared-up mind — but he won't see his 92nd birthday. Ptolemy has knowledge about an unsolved murder, so that gives him a good deed to perform in the meantime.
click to enlarge 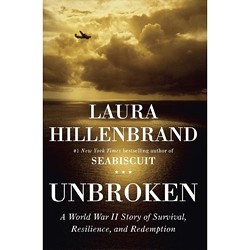 Unbroken: A World War II Story of Survival, Resilience and Redemption, by Laura Hillenbrand (Random House, 500 pages, Nov. 16)  Louis Zamperini grew up in Torrance, Calif., a juvenile delinquent; became a miler good enough to compete in the Berlin Olympics; got shot down in the Pacific; and in a Japanese POW camp, outwitted the camp's sadistic commander. By the author of Seabiscuit.
A Rope and a Prayer: A Kidnapping from Two Sides, by David Rohde and Kristen Mulvihill (Viking, 400 pages, Nov. 30)  A New York Times reporter in Pakistan, abducted by the Taliban in November 2008, recalls the ordeal — even as his wife of two months, back in New York, was also keeping a journal about her vigil.