Shake-up at the Spokesman, other news outlets

Change is coming to the Spokesman-Review, which outlined their plans yesterday in a press release (as well as in article in the paper).

Distribution director Dan Johnson, who will assume the newspaper’s top sales and marketing post in January, says he’s hopeful the paper can avoid furloughs and layoffs — which have become common at the Spokesman in recent years.For now, the paper will remain a daily — publishing seven days a week — but in their announcement, the Spokesman pointed out, somewhat ominously, that other papers have cut back on the number of days they print. 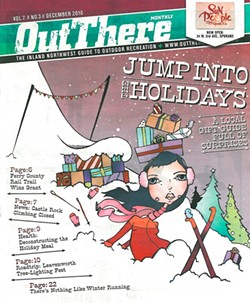 In the December issue of the outdoor-focused pub, Out There Monthly, you’ll see an advertisement prominently placed in the upper right corner of the front page. It’s increasingly common to see ads on the front pages of our newspapers — the Spokesman-Review’s been doing it since September 2007 — but it was the first time we noticed it at Out There. (The Inlander hasn’t put ads on its front page, but we also haven’t ruled it out in the future.)

Out There, it turns out, has been doing it for a while, says publisher (and city councilman) Jon Snyder.“We’ve been doing that for over two years now,” he says via email. “We did it because advertisers wanted it and because we felt it was an unobtrusive way to make our readers more aware of local business events.”

Interestingly, the ad is for Sun People Dry Goods, a new downtown general store stocking green, organic and socially responsible products. Interestingly, the company is owned by Out There’s former managing editor, Juliet Sinisterra. And interestingly, Out There printed an article about the store in the current issue, with Sun People’s ad on the front page.

While some publications have put their content and journalism up for sale to advertisers, Snyder says that’s not the case here. The ad and story aren’t related, and he says he’s not concerned that readers might make that connection.“Our publication is event-driven just like yours is,” he tells Bloglander. “Our main goal is to make sure folks can pick up the magazine and find cool things to do in a given month — whether it is a sustainable store opening or an ultra-marathon.

“We generally don't cover things that have already happened. Because of that there will always be some overlap between our calendar and features coverage and our advertising on any given month — no different than The Inlander.”

GOT TIPS ON THE MEDIA? Send them to jacobf@inlander.com.

THIS WEEKEND IN THEATER: Christmas has been kidnapped ... by a girl-group!

Clomp, clomp, clomp ... the City of Spokane breaks out the graders