THIS JUST OUT: World-of-Warcraft-Shreks-the-cataclysm-out-of-TRON-forever edition

"It's going to be the bestest thing ever!!!!!!" wailed the collective Internet the day it was announced that legendary be-leathered and be-helmeted electronic music duo Daft Punk would be writing the score for the new Tron movie. Already up to their necks in nostalgic kitsch, these nerds took to their Facebooks and their MySpaces and their Hotmail email addresses* to loudly proclaim that this was the culmination of all music, despite not having listened to a single note. In short, it took the traditional route to Internet popularity:

Get hyped. Build anticipation. Get leaked. Everyone on the internet feels they've been personally wronged. Try to fix it (optional) .**

OK, Internet, let's get something straight right here: You're not really the best barometer for what actual living human beings will like. This has been proven time and time again when things go to Comic-Con, get huge buzz, then fizzle out because nerds are the ones who are stealing things off the Internet.

Tone it down a little, mmmkay? Stop qvetching that you didn't get exactly what you thought you deserved. The Tron soundtrack is emphatically NOT the ninth Daft Punk album — it's a freaking film score. That being said, it's still a damn good film score, especially if you do like electronic music. So can't we just enjoy it for what it is, rather than bitch and moan about what it's not? 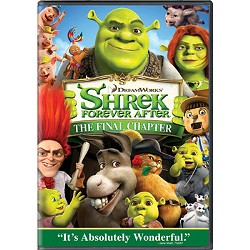 OMG, you guys. This is going to sound of crazy, so bear with me: Hollywood, in a quest for money and an inherent unwillingness to do anything that might be considered even the slightest bit original or risky, lied to us. They told us one thing, then did another.

Four was supposed to be the number of Shreks we were ever going to have to deal with. That was the maximum, the ceiling, the limit. I have several sources to this effect. And then what do they go and do? What do I see on the very same shelves as the Shrek: Forever After DVD?

Freaking Shrek spin-off. Oh sure, they can call it Donkey's Christmas Shrektacular and claim it's about Donkey, but there are two† problems with that: 1) Donkey wouldn't exist without Shrek, and Γ) "Shrek" is in the freaking title. Add that to Scared Shrekless, the Halloween special that aired on NBC (which has a history of airing horrible 3-D animated shows, like Father of the Pride), and it's safe to say that the horrible green ogre will never die. At least, not until Mike Meyers does.

So go out and buy Shrek Forever After, if you must. Just don't go blaming me when they release the seventh installment, Shrek 3-D, starring a footloose Cary Elwes.---

Uh oh. Lock your nerds and keep them in the basement (like they weren't there already), World of Warcraft is releasing yet another vector for sucking away the precious life force of geeks, dweebs and Gleeks†† everywhere. An expansion for the popular (that word seems inadequate, but whatever) massively multiplayer online role-playing game, Cataclysm unlocks a whole mess of new stuff for nerds to salivate into their neckbeards over.

I cannot won't lie in this case: I don't know most of the words that people use in reviews for the various WoW games. Apparently there was an invasion of something by someone, lots of weird things going on, and now there's extra content for you to enjoy. Hooray?

You level your characters up to level 85 now, there are a number of changes to Azeroth, new player-vs-player content, and (excitingly, apparently), the aility to fly mounts in Azeroth. So if you're looking forward to all this (or, really, have any idea what the hell I'm talking about), you should probably run††† to your nearest gaming store and pick up the expansion. Just, please, wear pants when you leave the house.


* Apparently, these are nerds circa 2003.
** The most noted occurence of this took place under Samuel L. Jackson's watch during the filming of Snakes on a Plane. When the Internet found out he didn't actually say, "There are motherf---ing snakes on this motherf----ing plane, it lost its collective mind. The studio went back and re-filmed a scene just for that. The movie just baaarely made back its budget in the U.S.
*** I'm not sure why this apparently occurred in medieval England, so just roll with it.
† There are actually three, because "Christmas Shrektacular" is the worst pun ever, save for all the other bad puns Shrek makes. "It ain't ogre 'til it's ogre," "What the Shrek just happened?" and (ugh) "Where my witches at?" for Rumpelstiltskin.
†† Does anyone doubt the overlap between Gleeks and WoWizens?
††† Is "Rascal," as in Rascal scooter, a verb?