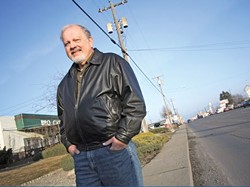 Former Valley mayor dead at 68 — Rich Munson, who served the City of Spokane Valley almost since its inception (first as a city councilman, then as mayor) died of complications of leukemia. (SR)

Cat fight leads to shooting — A roommate argument over a messy cat turned violent on Saturday, leaving one Spokane man in the hospital with a bullet wound. (Note the source. Yes, this is the kind of thing Spokane is known for in the international press...) (Toronto Sun)

The Seahawks are in! — The Seattle Seahawks capped a rocky season and clinched the NFC West division last night by defeating the St. Louis Rams in an old-fashioned nail-biter at Qwest Field. In doing so, they became the first team with a losing record to ever win a division title. The Seahawks will face the 11-5 New Orleans Saints in Seattle next week. (Seattle Times)

Greenstone Homes vs. the Department of Ecology