UPCOMING BOOKS: Obama's re-election, ghosts in the Everglades, and a Japanese murder mystery

Coming soon to a Kindle near you: a biography of John Hinckley's favorite author, novels about twentysomethings growing up, a mysterious Parisian woman, and more.

J. D. Salinger: A Life, by Kenneth Slawenski (Random House, 460 pages, Jan. 25)
Why was Catcher in the Rye so cynical? Maybe because Salinger fought at D-Day. (Of course, he survived the bloodbath, then went to Paris and looked up Hemingway at the Ritz.) Slawenski, by most accounts, is a Salinger expert who's good at explicating the books in great detail while still smudging his portrait of, admittedly, one very elusive man.

O: A Presidential Novel by Anonymous (Simon & Schuster, 360 pages, Jan. 25)
O is a novel of political intrigue about President Obama and the things his advisers will do to win re-election in 2012, written by an anonymous author with vast personal experience in this realm. (By the way, cute ears on the cover.)

Juno's Daughters, by Lisa Saffran (Plume, 330 pages, Jan. 25)
In the San Juan Islands, an amateur summer production of Shakespeare’s The Tempest starts to parallel the lives of Jenny, her two daughters, and the handsome young actor, new in town, who’s also in the show.

The Intimates, by Ralph Sassone (Farrar, Straus and Giroux, 250 pages, Feb. 1)
It’s Will & Grace in novelistic form: Robbie and Maize date for a while in high school, until Robbie gradually figures out that he’s gay. Then Maize starts making poor choices among lovers and bosses. After a platonic, years-long friendship, Maize and Robbie realize that they are each other's human diaries. Sassone’s debut novel. 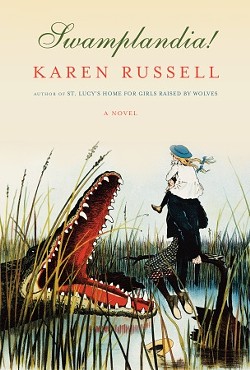 Swamplandia!, by Karen Russell (Knopf, 330 pages, Feb. 1)
Ava, just 12, has to take care of 70 gators, what with Mom dead and Dad and brother gone. Plus, her sister has run off with her ghost lover — no, really, he's a ghost — and they're somewhere on the other side of the Everglades. Carl Hiaasen — Florida's premier novelist of comic intrigue (Lucky You, Skinny Dip, Sick Puppy) — has raved about Russell, comparing her prose to that of Joseph Conrad, Gabriel Garcia Marquez and, best of all, Judy Blume. And besides, you gotta love any writer whose previous collection of short stories is entitled St. Lucy's Home for Girls Raised by Wolves.

Ghost Light, by Joseph O'Connor (Farrar, Straus and Giroux, 250 pages, Feb. 1)
As Molly Allgood wanders past bomb sites and through the forlorn beauty of wrecked terraces and wintry parks in 1950s postwar London, she remembers her once-dazzling career, her travels in America, and her love affair, back in 1907, with Irish playwright John Millington Synge (The Playboy of the Western World). O’Connor, who’s Irish himself, wrote Star of the Sea (about potato famine refugees crossing the Atlantic in a leaky boat) in 2003.

The Adults, by Alison Espach (Scribner, 320 pages, Feb. 1)
A debut novel about a teenage girl growing into her 20s while surrounded by untrustworthy authority figures. The effects of divorce, adultery, alcoholism and suicide all come crashing down on Emily when she’s just 14.

The Devotion of Suspect X, by Keigo Higashino, trans. Alexander O. Smith (Minotaur, 300 pages, Feb. 1)
Abusive husband threatens wife and daughter; in self-defense, the wife kills him. Then the next-door neighbor helps them with the cover-up — until the brilliant consulting detective (“Dr. Galileo”) turns out to be an old college acquaintance of the neighbor’s. What follows, in this psychological novel (originally published in Japan in 2005), is a battle of wills and wits, peppered with lots of philosophical sayings and mathematical proofs.

13, rue Therese, by Elena Mauli Shapiro (Reagan Arthur/Little, Brown; 280 pages, Feb. 2)
An American academic discovers a cache of objects (pictured in the book and, more thoroughly, online) from a feisty French woman who lived through both world wars. What the professor doesn’t realize is that he himself is being investigated by the woman who left the box for him to find.

You can't acquire these books yet. To read about books already available, visit our books blog.