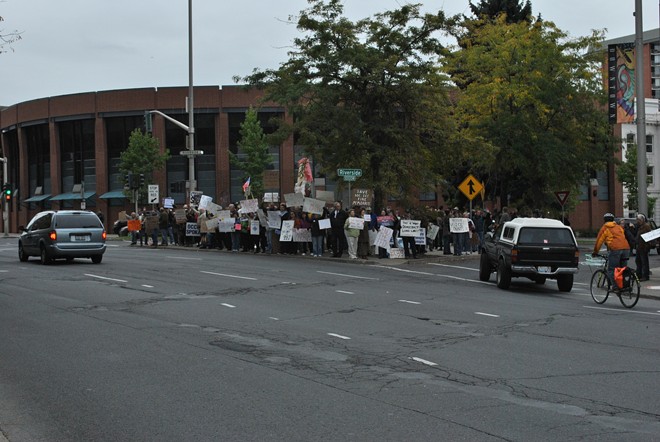 Occupy Spokane protests on a downtown median in October.

Occupy Spokane will be opening a second protest site at a Division Street park on Thursday, due to the increasingly cold and inhospitable climate downtown.

The protesters have been waving signs from the median at Riverside Avenue and Monroe Street for over a month. But "Pippie," who runs a volunteer kitchen that was set up to serve the protesters and who has attended the movement's general assembly meetings, says the group has decided to start a second protest at Franklin Park.

"Obviously, that [median] is going to become some sort of issue as the weather becomes worse," Pippie says, adding that people will still be occupying the median downtown. "Hunkering down in the park is a better strategy."

At the weekly general assembly meetings, Pippie says, people have discussed setting up tents in the park and holding marches through the north side of Spokane. Pippie says she may re-open her Hippie Family Ministries volunteer kitchen depending on how the turnout at the park is.

Parks have been familiar settings in the global Occupy movement. Protesters in New York city have inhabited lower Manhattan's Zuccotti Park since September.

But in other cities, like Oakland, Calif. and Portland, occupiers were chased out of parks by police after the city administrations grew fed up with their presence.

City spokeswoman Marlene Feist says she was not aware of Occupy Spokane's plans to move to Franklin Park and adds that they have not sought any permits to set up facilities there.

Invisible Children, PTSD and a gospel choir at Whitworth this week