Our top stories and blogs from 2011 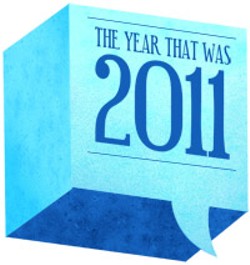 2. Off the Bus (Nov. 2) — Three transexual Spokane teens are kicked off an STA bus for discussing sexuality. (STA apologizes after our story runs.)

3. Elkfest 2011 (June 1) — The starting lineup for the Browne's Addition party, which featured Crickets of Cascadia, Strength, Sallie Ford and more

4. Best of Food and Drink (March 23) — Our readers' picks for the best sushi, pizza, wings and everything else

3. Empyrean is closing (Jan. 3) — One of Spokane's hardest-working local-music venues calls it quits

4. The problem with Fringe (May 4) — Daniel Walters gets critical

5. Rod Stewart's son playing for the Chiefs (Sept. 22) — How the hell did Liam Stewart end up in Spokane? (And does he know now the things that Rod knew when he was younger?)

These three blogs from 2010 actually garnered more hits than many of our 2011 posts.

Ah, Hillyard (July 21, 2010) — In which I have a freaky bike accident in Hillyard, bad-mouth the neighborhood in frustration and never hear the end of it.