It's Sasquatch Eve: our predictions for this year's lineup

The time is upon us, fellow nerds. 'Tis the eve of lineup-annoucement-day of the Northwest's only cryptid-themed music festival: Sasquatch Festival Numero ELEVEN. 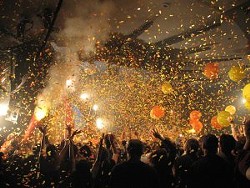 Since tomorrow is the big day, we figured we'd take some time out of our early afternoon, gather 'round the watercolor and brainstorm who we think will be playing the Memorial Day Festival this year, and who we hope will be there.

The consensus around Inlander HQ was that Sasquatch would be poaching some of the lineup from Coachella this year. We agreed that it's most likely that At the Drive-In would headline one day, and that the Black Keys would likely anchor another. The idea that Dr. Dre and Snoop Dogg would come up north? We're not buying that it'll happen, but we're on board with that. Our senses tell us that the Shins, F—-ed Up and My Morning Jacket might show up, too.

But what bands would get us make us cough up a million dollars for a ticket, into the car and directly into the heart of Sasquatch? That's up for debate.

The Flaming Lips, who've played the festival four times before, would get us there. That's likely to happen, and you can be sure as shit we'll be bringing "Flaming Lips Brownies" to the party, if they do play.

Inlander newbie, Arts Editor Mike Bookey, says Built to Spill, who has played 'squatch twice before, would get him there. And so would indie-poppers, Givers — who did, actually, play the tenth anniversary festival last year.

Chris Stein, news writer and resident Inlander youngster, is biking to the Gorge if Refused, the lauded Swedish hardcore band who got popular long, long after their breakup at 1998 houseshow, plays. (Personally, I'd be front and center singing "The Shape of Punk to Come," but I can't help but feel a bit of this sentiment). "I don't want to die sad and empty because of a lack of Swedish hardcore in my life," Stein says.

What would get me there? A lot from the Coachella lineup, actually: DJ Shadow would be incredible at the Gorge. So would Mazzy Star, a long-gone favorite of mine from the mid-1990s. I'm still kicking myself for missing out on the two-punch of Nine Inch Nails and Jane's Addiction from a couple years ago. If Trent's there, I'm there. I could see Mastodon making a cameo, too, based on the indie-crossover with their 2011 record, The Hunter. I wasn't crazy about that album at all, but I'd go to see them live again.

So — who do you think will play Sasquatch Fest this year? Who are you hoping for, and what band would get you to load your 9-to-5 ass in the car for a hot, sweaty weekend in the middle of nowhere?

Mary Verner gets a job