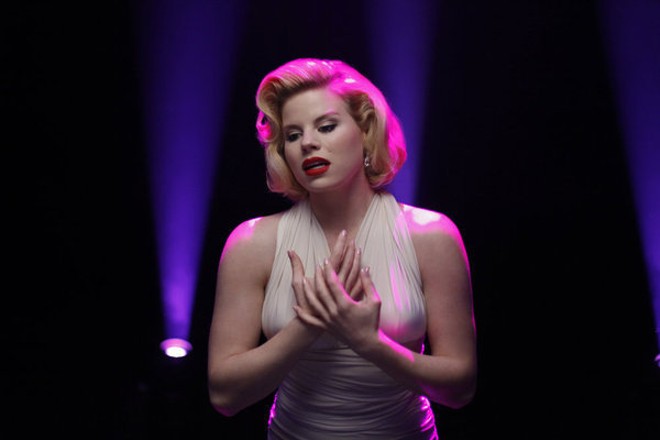 Smash, NBC’s heavily promoted, last-best-hope (along with The Voice) to claw back from the ratings abyss, premiered last night. There was a lot to like about Smash, most notable in the mistakes it doesn’tmake. (The temptation to score everything with zany ABC Comedy-style music has been miraculously resisted.)

But even now – even already – the show is running into a problem that helped sink shows with even more hype: The Show-Within-The-Show-Problem.

The biggest, most obvious example is Studio 60 on the Sunset Strip,the show where West Wing’s Aaron Sorkin spins a tale of two genius writers, brought on to resurrect a Saturday Night Live show from the depths of inanity. The revitalized show, the script claimed, would be a triumph of comedy and intellect.

Instead, we got a weak parody of an easy-to-parody Gilbert and Sullivan song and an unlikeable actress making sounds like dolphins.

TV writers and actors excel at delivering convincingly inspirational speeches – because that’s exactly appropriate for their talent. Beating other types of entertainment at their own genre – that takes either extraordinary talent or extraordinary hubris.

That’s an early problem with Smash. We get clips of the sorts of show that Smash could be. We have the characters cooing about how genius the show is.

“I have already conceded the work is brilliant,” one character – a skeptic! — says to the other. But the songs aren’t necessarily brilliant – they’re adequate. They seem like the filler songs of a decent musical, not the sorts of songs that create the next Smash hit. The songs or themes don’t approach those of Les Miserables, and the ideas or ingenuity nothing like Wicked.

There are hundreds of brilliant writers and producers putting every moment of their day into trying to create the next smash-hit musical. Many of them, undoubtedly, have better – and more creative — than the songs from Smash.

The alternative – the better alternative – is to do what Extras or30 Rock do. Allow the show-within-the-show to be completely awful. Comically awful even. Sublimely, fascinatingly bad is always easier to achieve than This-Would-Be-A-Hit.

Smash could succeed as an interesting drama. But that interesting drama is if it allows itself to be Spiderman: Turn Off the Dark, a musical that seems fated to be sunk by blind egos, awful reviews, and horrible disasters, but that sells tickets because of that.

Because nothing sells seats like the promise of a live train wreck.