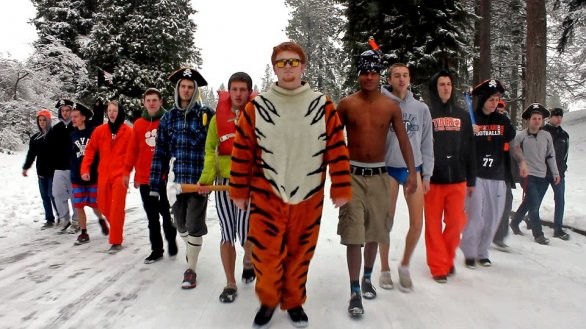 Taylor Wright
No fear, if you don't know to cheer, Spooh Crew is here.

If you like calm, civilized games, where people golf clap after points are made, The Rubber Chicken is not for you. Tonight, a 30-year-old basketball rivalry between two District 81 schools, Ferris and Lewis & Clark, will take over the Spokane Arena once again.

This baby idea from an ASB president in 1983 has grown into one of the largest (if not the largest) high school basketball games in Washington State. What’s the big deal, anyway?

Sure, both schools have had some star athletes throughout the years, even some victory competing on the state level. And tonight should be an interesting, some say evenly-matched game. Thus far, both Ferris girls and boys teams have 7-3 records, LC girls 5-5, and LC boys with a 4-6 ratio this year. Let’s get real, though. It’s all about the cheering.

Spokane sports fans love basketball. The wide fanbase for Gonzaga (sorry Whitworth and EWU) has kept ‘em going through good and bad. And for one night a year, high schools have an equally avid support system, all sweating and screaming for them in the stands. Watch the decibel levels in the room as well as the pitch, because a majority of the crowd are students, aged 13-18.

It’s next to impossible to get a thousand teenagers to do something in unison without cheerleaders directing them. The Cheer Team as well as the Spooh Crew (boy cheerleaders essentially) are the maestros of the spirit competition (how you win the Rubber Chicken) and are fun to follow if you’re not actually into basketball.

LC chose the theme “Chuck Ahoy” this year. As much as I’d like for it to be a cookie theme, the direction they are going with is more nautical, encompassing both sailors and pirates. Ferris chose “Farmer Chuck,” so expect overalls, plaid and cowboy hats.

Back in the day, each school just chose a color as the theme - usually red for Ferris and orange for LC, but since, they have determined more complex themes. In my secondary days on the South Hill, I’ve seen a hoard of Michael Jacksons and Billie Jeans face off a swarm of geeks, a fleet of firemen (and women) hose a mob of Tarzans and Janes, and a team of super heroes challenge an army of Greasers and Pink Ladies. Sounds like the premise for some really bad comic, doesn’t it?

Do I remember who won the actual basketball games? Definitely not. But remember, it’s not whether you win or lose, it’s how you cheer the game.

Another one bites the dust: The A Club closes