Not only is the state of Washington socially progressive for voting to legalize gay marriage and the recreational use of marijuana, here in the Evergreen State we also really love cats. 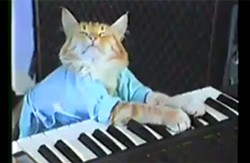 A press release from the American Veterinary Medical Association (AVMA) landed in my inbox earlier this week with the subject line “Washington ranks 5th for cat ownership.” Not only was this information celebrated throughout The Inlander newsroom, I knew this important news had to be the subject of this week’s Cat Friday post.

You might recall a Cat Friday post from a ways back that introduced the Inlander staffer’s kitties. It was one of the most popular posts we’ve done, but since then we’ve had a few more kitties to add to the roster and whom we’ll have to introduce to readers in the near future. In a newsroom of nine writers/editors, five of us are proud rescue/shelter cat owners.

As a whole, 39 percent of Washington households have cats, based on data from the end of 2011. Back in pre-recession 2006, our lovely state was still ranked 5th in the nation for kitty ownership, but the percentage of households, at 44.5 percent, was also quite higher.

Col. Meow, who resides in Seattle, is probably one of Washington state's most recognized kitties.

Idaho ranked 8th in the U.S. for cat ownership, with 34.6 percent of households reported as kitty friendly.

Overall, Washington ranks 6th in pet ownership, but unfortunately did not make the top ten states for dog ownership.

Here are the states that made the top ten lists for cat, dog and pet ownership.

In other year-end lists of pet-related info, check out this list of some of the 50 weirdest dog and cat names that popped up on pet insurance policies in 2012.

Petside.com also has put together a list of the most popular cat and dog names of last year, and both lists are surprisingly similar. I would take that as a hint that people need to get a little more creative with their pet naming.

What are your pets’ weird or uncommon names? Leave them in the comments!

Also, don’t forget that we’re still putting together a list of Spokane-Coeur d’Alene area business/store cats for an upcoming installment of Cat Friday! We wouldn’t want to miss anyone so please send us the names of any businesses you know of in the area that have resident felines. Email your suggestions to cheys@inlander.com.