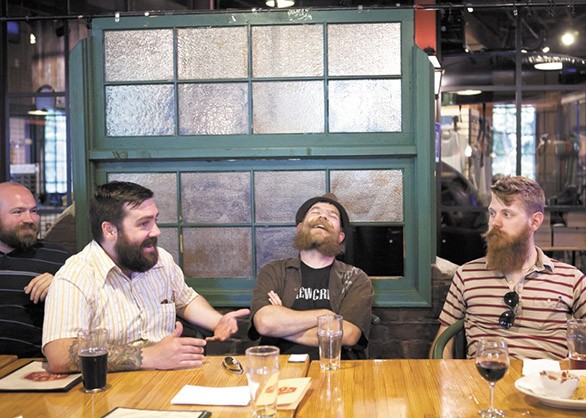 Stephen Schlange
Eric Bandholz, right, at a Spokane Beard and Mustache even.

Spokane occasionally gets a mention in the national media for our sports, if Gonzaga has a good year, or for various bombing attempts. But this week may mark the first time Spokane ever got into The New York Times fashion section. The beard of Eric Bandholz, founder of the Spokane Beard and Mustache club, was described in a trend story about “tamed” beards:

“Eric Bandholz, 31, a graphic artist in Spokane, Wash., who writes about beards on his blog (beardbrand.com) uses Woodsman mustache wax and beard oil, and American Crew shampoo and conditioner, to maintain his distinctive red beard. Mr. Bandholz, a former financial adviser, said he coined the term ‘urban beardsman’ for himself and his brethren of bearded renaissance men. ‘We are into music, design, culture, and into being unique,’ he said.”

Bandholz kindly took some time to talk to me about the story and his vision for the “urban beardsman” cultural movement. He says it’s hard to reduce the definition into a single sentence that way, but overall the story got things right. He spoke to the reporter of the piece late last year for about an hour.

The celebrity photos accompanying the story depict mostly stubbly, sparse examples — more 5 o’clock shadow than real beard. Bandholz was diplomatic when I asked him about that, but agreed those aren’t really the beards he’s concerned about.

“You don’t really need to maintain a beard that’s only a quarter of an inch long,” he says.

The Woodsman products mentioned in the story are for sale on Bandholz’ site, and he imagines someday being able to create a culture around quality beard products kind of how NIKE spawned a whole culture of functional sports fashion. Bandholz’ beard entrepreneurship came about because he knows the manufacturer of the products, which are made in Austin, Texas.

And if it all sounds like exactly the opposite of the article’s claim that beards are no longer a hipster thing, Bandholz is OK with that.

“It is a hipster thing,” he says. “But for me, I don’t see ‘hipster’ as having negative connotations.”

He’s all for individuals who are passionate about certain things, and who care about the fashion of their beard. If you want to join the local community, check out the Spokane Beard and Mustache website or Facebook for upcoming events. (Ladies and un-bearded gents are also welcome.)

Would the Spokane Tribe's Casino cause Fairchild to close? Heck no, independent study says