Is Spokane really that happy? What the study of tweets really means

Which parts of the U.S. are the happiest? A new study by researchers in Vermont aimed to answer that question by analyzing tweets, and their results have been getting a lot of local chatter because of what was revealed about Spokane: We are the 11th happiest city in the nation!

But before we get even happier about how happy we supposedly are, let’s take a closer look at how the study worked.

The researchers plotted more than 10 million geotagged tweets from 2011 on a map of the U.S., and gave each one a happiness value based on the “average happiness of nearby words.” Basically, they’re looking at how often people use specific word designated as happy or sad. 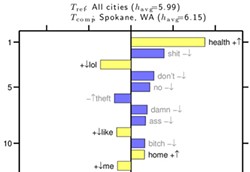 There’s plenty to argue with: Both Spokane and the state as a whole were considered sadder because tweets didn’t use the word “me” enough.

Idaho ranked even happier than Washington, partially for the frequency of the happy words “sun” and “valley.” The frequency of the sad word “falls” hurt their ranking, however, and also cast doubt on how well the study screened out place names.

The researchers also suggest you can actually spot happier and sadder places within cities, and here’s their up-close map of Spokane (PDF). Red is happy, blue is sad.

It’s hard to tell exactly where things are, even when we overlaid it on a street map of the city, but it’s clear there’s a lot of happiness downtown. There seems to be a rather intense pocket of happiness and sadness right around the Gonzaga campus, and a fair amount of sadness out at Fairchild. There’s also a mysterious pocket of sadness on the lower South Hill right around Monroe.

The specificity is kind of fun, but it’s probably a mistake to take it too seriously. It’s worth noting that Spokane ranked 98th among 190 U.S. cities in the most recent Gallup-Heathways Well-Being Index, so we can at least be happy that we’re probably happier than average.

The Harlem Shake has gone global, with a local twist